Nicholas Nickleby is the first novel I have read, which was written by Charles Dickens. I bought it as I was on the verge of finishing War and Peace and wished to read more classics. While I had bought The Karamazov Brothers by Fyodor Dostoevsky along with this novel, I decided to read Nicholas Nickleby first, since I had read 3 novels by Russians authors back to back and needed a break from Russian style of writing. 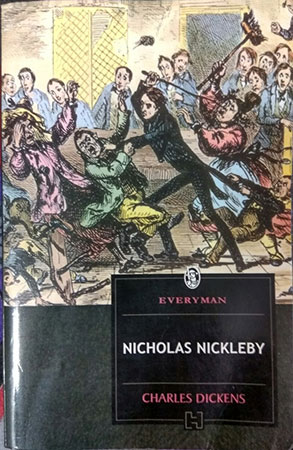 Nicholas Nickleby is the story of a young man, who after the death and bankruptcy of his father, is trying to establish himself and support his mother and sister.

While he has an uncle, who is quiet rich and being a bachelor, has no other heir apart from Nicholas and his sister, Kate, does nothing to help and provide for the family, rather tries his best to ruin Nicholas at every juncture of his life.

Nicholas who is a rather naïve fellow in the ways of the world and is good of heart, initially misinterprets intentions of his uncle, only to be rudely brought back to reality of the cruel world we live in.

In a way we can term this a cliché story of a young man’s rise from poverty to riches and triumph of good over evil; however the way in which Charles Dickens has written it, there is never really a dull moment in the story, apart from the initial part. However this is true for most novels, especially long ones like these with depth of story and emotions, which is rarely seen in the novels written these days.

After reading Nicholas Nickleby, I have become a fan of Charles Dickens. His command over the English language is amazing and the way he manages to dive deep in to human psyche and paints the character and acts of individuals in the story is commendable and will leave you without a shadow of the doubt, that the characters weren’t just figment of his imagination, rather real people author encountered at one point of time or the other.

Nicholas Nickleby is an amazing read, though with nearly 800 pages of small text, it might be rather long for most casual readers.