Is it possible to sympathies or at least try and understand the perspective of a criminal? That too someone who murders with an intent to rob? 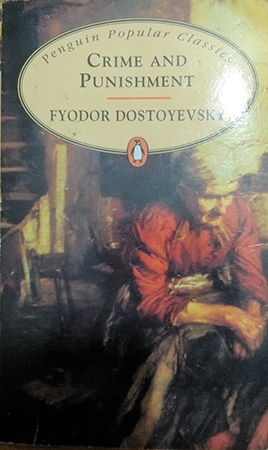 If you read Crime and Punishment, this is exactly what you would be doing, at least in a way!

Since the protagonist, Rodion Raskolnikov, a poor and delusional student, does exactly that, that too while justifying murder in his mind by terming himself as an extraordinary individual, akin to Napoleon Bonaparte and thus having the right to kill people in order to rise to the top!

On the surface it sounds twisted and in a way it probably is, however it doesn’t takes away from the fact that this is an extremely interesting book to read, as it not only dives into the psyche of a delusional yet intelligent young man with a conscience, but because it also gives a precise portrayal of society which judges people not based on facts, rather on their appearance and academic and financial worth.

Crime and Punishment is an interesting tale of a first time criminal, who has although justified the murder to himself, yet has become completely delusional to the point that he openly begins to challenge officials and even friends, whom he suspects, are suspecting him for the murder.

And this is what makes the book so gripping and interesting to read; in fact it isn’t until the murders are committed, that the story becomes interesting. So if you start becoming bored in the beginning and think of letting it go, just stick around, it is worth the trouble!

Since Crime and Punishment has been translated from Russian to English, it does not have the sort of fluency or command over the language as natively written English novels have, Fyodor Dostoevsky still manages to pour his thoughts and emotions so well into the novel that one can easily look over this fact and concentrate on the story itself.

Overall, Crime and Punishment is a different story which yet has the same human emotions and drama, which we all can relate to and sympathize with at some level, and that for me, makes it an excellent read.