It’s been couple of weeks since I have been playing around with my new Silver Titanium Samsung Galaxy S7 Edge and here’s what I think about it. 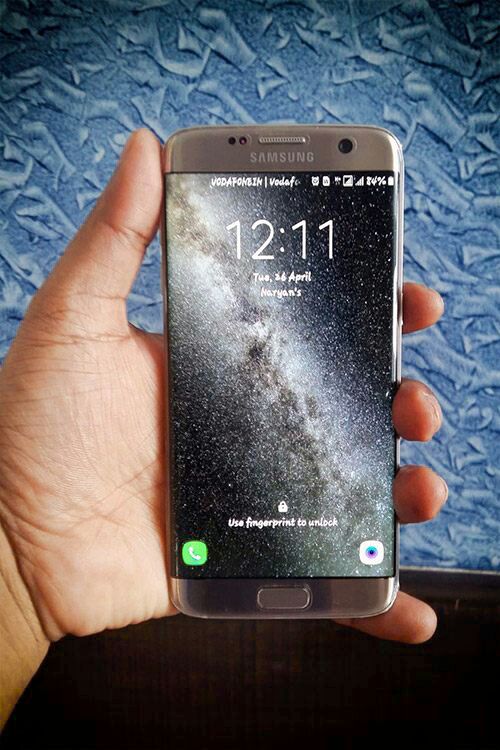 This is the phone you should buy, now! Because, this is the Smartest Smartphone out there!

So what propels the 5.5 inch Galaxy S7 Edge to such pinnacles?

Is it the brilliant camera, the monster of a battery, the flexible storage or the seductive design that’s worth more than the amount of its parts?

Yes, and more! Everything about the S7 Edge outshines from the inside out. 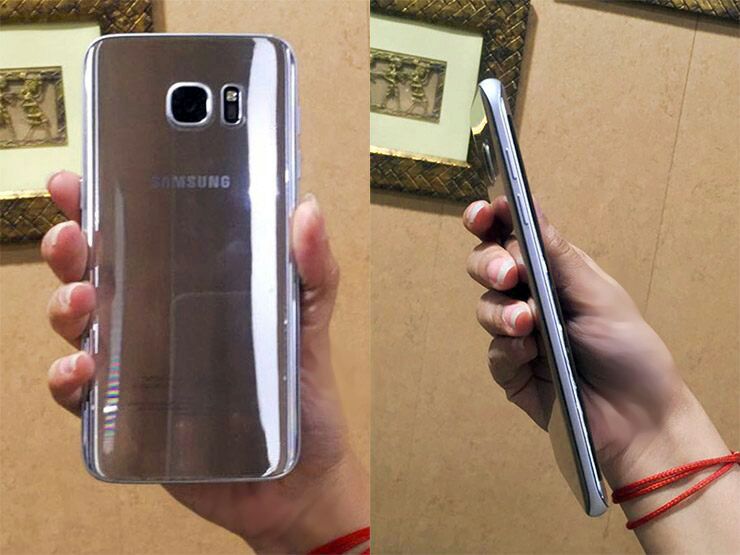 2015’s flagship offering from Samsung, Galaxy S6 Edge was a master class in desirability. Well, the S7 Edge has taken that desire to an amazingly new level! This phone kicks the already fantastic S6 Edge up with a bigger better battery, larger screen and those functional daring edges on both sides that draw you deeper into whatever you view.

Core concept for the successor of 2015’s best smartphone, remains the same. It is bigger and bolder than ever before. Power, looks and a beautiful display make this the best phone Samsung’s ever released. Samsung has also brought few additional features that were missing last time, specifically, water-resistance and a microSD slot for additional storage.

Now let’s checkout some of the core specifications of this stunning monster performer! 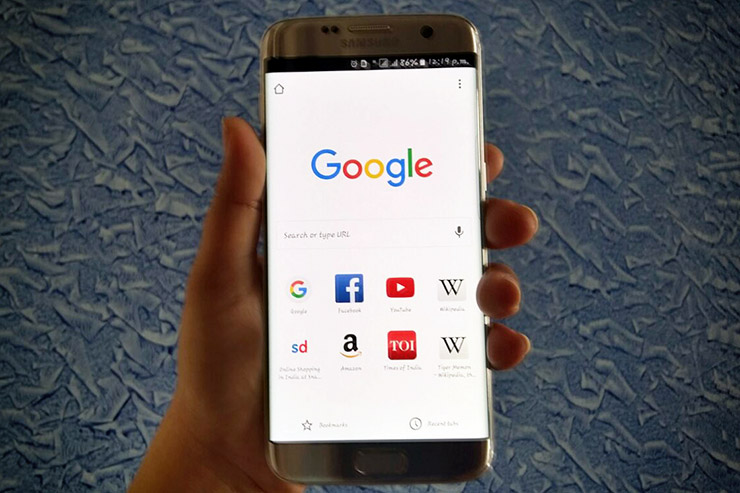 Samsung has built a Quad HD Super AMOLED screen at 2560×1440 pixel resolutions, equating to 534 ppi density for the S7 Edge. Now what does Quad HD mean quite literally? It means, it has four times the resolution of an HD or HD Ready screen (i.e. 720p). Mighty Impressive!

Simply put, the results are blacker blacks, brighter whites, sharper images and a stunning overall display! It’s simply the Best out there, absolutely superb in every aspect and it’s very hard to see any artifacts lying around on the screen!

Within the Device Settings, you have an option to adjust the screen mode between an Adaptive Display, AMOLED Cinema or photo, or Basic.

The Adaptive Display, as the name suggests optimizes the color range, saturation and sharpness of the device automatically, which I personally like and use. Whereas, the AMOLED Photo and Basic have a yellow tinge which some may like better.

Now unlike the underutilized Edge functionality of the S6 Edge, the Galaxy S7 Edge utilizes those sensual curves to the most. Where this was gibberish, useless feature in years gone by, the edge display has a much more defined role on the S7 Edge. You can easily access news, regular contacts, tools like the ruler scale and other features that are currently in development on the Edge Screen technology.

The impressive display comes in handy when you want to show off your photos or use a Virtual Reality app with the Samsung Gear VR, (which I’m yet to get my hands on)! Earlier Samsung was offering it free for those who pre-booked the handset. Now it offers the Gear VR at a 50% discount for S7 Edge buyers. Nevertheless, it is delightful to watch high-definition videos and Images on the S7 Edge. 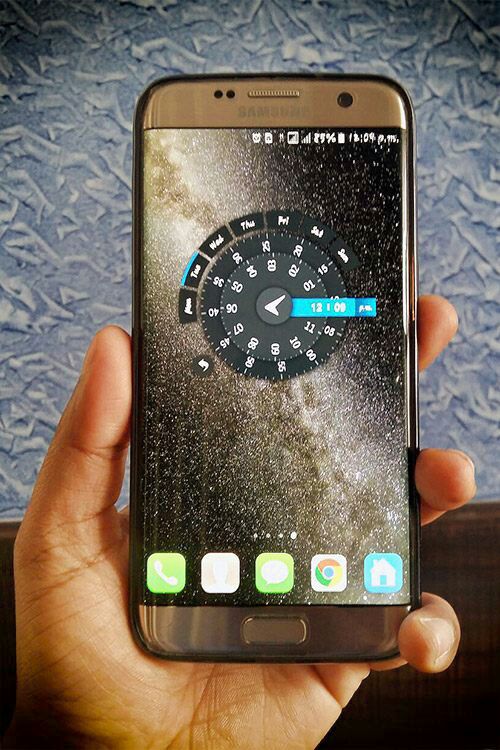 As for the power, the S7 Edge comes with a massive 3600mAh single-unit battery. In my rough testing, which included activities such as watching online HD videos, playing online music, downloading and playing HD games, sending e-mails, using Facebook, Twitter, taking 174 pictures and browsing the web, it lasted for an entire 15 hour day! That’s really about as much abuse put together at once. Helping things along is Qualcomm’s new quad-core Snapdragon 820 processor, which sure puts an end to the heat, throttling, and battery life issues that plagued 2015’s flagship phone. The performance is top notch. Period!

Samsung has imbibed the well balanced battery settings off the earlier versions and improvised it further. It’s the Power Saving mode and the mystic Ultra Power Saving mode. Many anticipated that Samsung would bring back replaceable batteries for the S7 series however, as a significance of making the device water-resistant, the company had to seal the back, making this impossible.

So what happens when the Power Saving Mode is turned on? The Email, Instant messages and all other apps that use sync to pull updates from their respective servers won’t update until you open them. Meaning, your emails won’t come in automatically; you will have to open the app to receive new messages. However, all these features will be re-enabled once you plug the phone to charge as Power Saving Mode is automatically disabled while charging.

Now if you really want to conserve the battery, turn on the Ultra Power Saving Mode! Once enabled, your phone would turn old school, namely a grey scale theme would be applied to the Home Screen. Only three applications would be available i.e., Phone, Messages and Internet. You can further conserve the battery by turning off Mobile Data. Now that’s thoughtfully conservative Samsung!

The new ‘Always-on Display’ mode is also cool but needs some work. The fact that AMOLED screens don’t need to light up the whole display all the time and can instead select individual pixels to charge is an advantage to use this technology. This means the S7 Edge can still show time, date and battery percentage on the lock-screen when the phone is idle without eating too much battery. 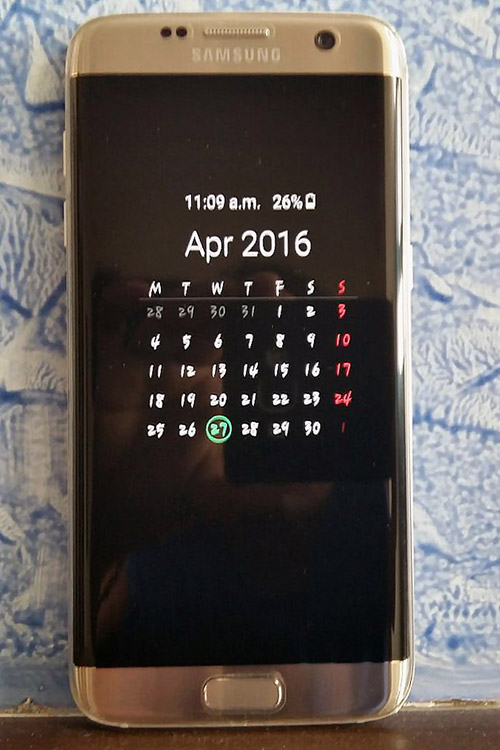 Samsung says having the ‘Always-on display’ switched on will only use up an extra 1% of battery per hour and those claims stand true during my testing. Yes, the Always-on mode shows the time, but it will only alert you to notifications from default apps like Messages and Phone. Use WhatsApp? Or Facebook? Sorry, these won’t show up.

I’d also like a bit more control over the Always-on Display mode. You can’t alter the brightness and aside from choosing whether or not you want a calendar showing, there isn’t much customization allowed.

It’s a nice start and a feature that has potential to be very convenient, but it needs work.

Expandable Storage and Dual-Sim capability – MicroSD is Back!

The Galaxy S7 Edge comes in only one option, the 32GB variant. To address concerns about the small 32GB of storage, the S7 Edge has a dual SIM slot with space for a MicroSD card to enhance the memory capacity up to 200GB. Sadly, you do not have the luxury of utilizing both expandable storage and the Second Sim capability at once.

For the ones who’re not happy on this front like me, the Micro USB to USB Flash Drive connector comes to rescue! Samsung gives this connector in the original box packaging. You can directly plug in a USB pen drive to your phone and transfer all that you want, to and from it! How cool can that be now! Are you listening Apple? 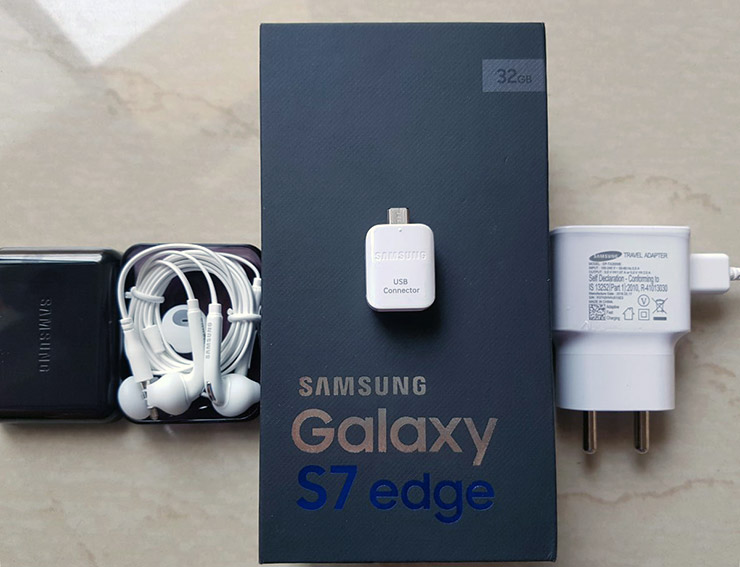 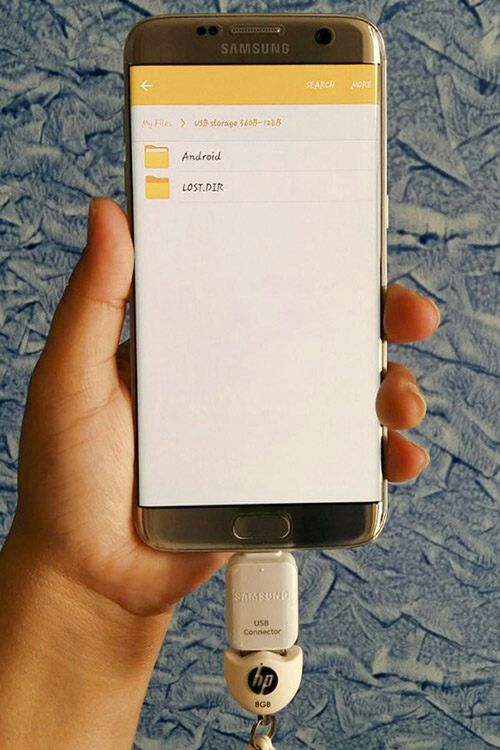 These are features enough to give Apple’s flagship models a truly tough time!

Marshmallow marks a point of refined design changes around the interface. Artistically speaking, the bright colors in the notification shade have been exported in for understated tones of blue and gray and a few design-inspired animations throughout the user interface.

The UI also feels pretty sharp, and the mighty RAM management problems from the Galaxy S6 Edge seem to no longer be an issue. Uncomfortably placed drop shadows and pointless 3D animations are gone, which is a welcoming change, but much of Samsung’s interface is the usefully same as you’ll find on a Galaxy S6 edge still on Lollipop.

TouchWiz is still there, whether you like it or not, but it’s gotten far less interfering over the years. Most importantly, there’s a theme engine to give you some control over what things look like. Android itself gives you lots of options to fix the interface, too. There’s a replaceable home screen and keyboard plus Google versions of the Clock, Calendar, SMS app, and Gallery in the Play Store. Still feature rich, but noticeably less bulky than previous editions, and certainly more streamlined and arranged. The most notable new feature, which the new TouchWiz brings, is the always-on display which has been discussed earlier through the review.

Recent apps pretty much look the same and the primary additions are a “clear all” button and controls for Samsung’s multi-window implementation. The lock screen is pretty close to stock Android, too: the time, notifications, and two shortcuts.

That’s pretty much what’s new and significant in the new UI.

Summing it up, overall, I think Samsung has really made a lot of great improvements with the new TouchWiz for the Galaxy S7 Edge. But I will tell you this much: Samsung’s done enough to warrant a premium price tag. No other phone can boast these many thoughtful features in such a graceful and attractive package. It’s now a refined, sophisticated and highly desirable piece of technology. The battery isn’t removable but the phone lasts longer than before and has seriously powerful specs under its hood. It has almost everything you could want from a phone.

Right now, this is the best smartphone money can buy. If you’ve got the cash to burn, then this Samsung is a smartphone worth flaunting!

This review of Samsung Galaxy S7 Edge was written by Narayan Kondaveeti.