When I signed up for Netflix trial last month, I had high hopes for it. Netflix is something we have all heard about and finally, it had arrived in India.

Signing up was fairly easy, though it did require me to add my credit card details at the time of account creation. However, apart from a verification fee, which is promptly refunded, your account isn’t charged anything during the trial duration. If you cancel before the billing date, you shouldn’t be charged for the corresponding month either.

There are three plans for Netflix India:

Basic: For Rs. 500 a month, you can watch standard definition content from Netflix on one device i.e. you can’t watch it on multiple devices simultaneously.

Standard: For Rs. 650 a month, you get access to HD content and you can watch Netflix simultaneously on 2 devices.

Premium: For Rs. 800 a month, you get access to Ultra HD content, which can be watched simultaneously on 4 screens.

In my view, the standard plan makes the most sense, since there is no point of watching Netflix content in standard definition. While Ultra HD is something I would have loved to try, however, monthly rental as well as associated bandwidth overhead would have placed it beyond my monthly reach, and hence I didn’t try it out and instead opted for the standard plan. 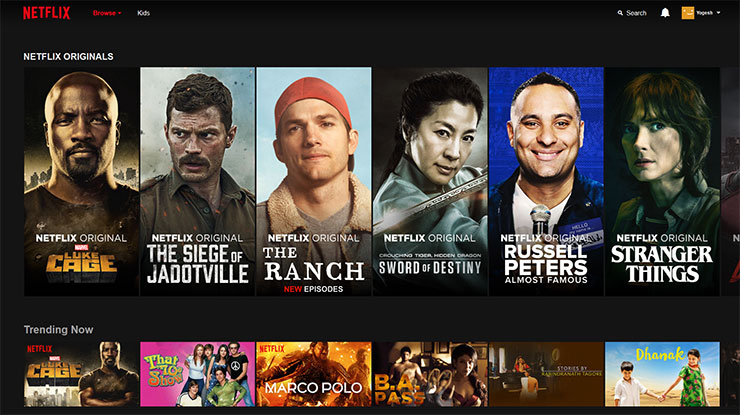 After signing up, my first disappointment came in the form of Suits. Even though episode 16 of season 4 had already been aired in US couple of weeks ago, Netflix India had only 13 episodes of season 4. Earlier this month, they finally added the last 3 episodes.

They do have quite a few of their original series available in India, and I thoroughly enjoyed watching Narcos and Marco Polo. I even watched the first season of 70’s show and a few movies and viewing experience on my 16mbps Airtel DSL connection was excellent. Apart from initial low resolution beginning of any video, rest of it was played in HD and without any lag (apart from a handful of occasions).

Netflix is a good way to legally watch content online, and it is fairly easy to use and has good quality content. However, a limited amount of content and comparatively high associated costs (apart from Rs. 650 a month for a standard plan, you also pay for higher FUP limit to your ISP), just doesn’t make any economical sense, at the moment.

Maybe if and when Netflix brings in more content and streams episodes of series simultaneously with their US release, it will begin to make sense. Netflix India also needs to lower their price, they aren’t a real alternative to TV yet in India and you can get 4k content on satellite TV for far less than their Premium plan.