I am always on the lookout for ways to save energy. With LED bulb getting cheaper by the day; I decided to buy couple of Philips 9W LED bulbs for my home. In order to save energy and money.

LED bulb I went for is the Ace Saver Crystal White and it delivers 825 lumen of light. 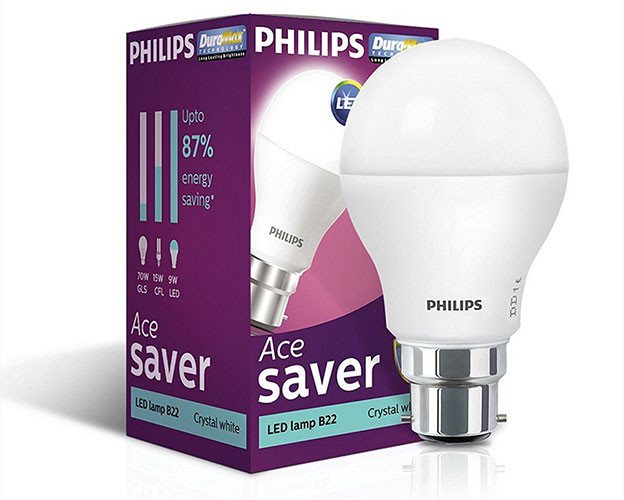 Light intensity is measured in lumen, and this is the best indicator of how bright a light would be, as long as manufacturer is quoting the right numbers.

To put things into perspective and leave behind the technical jargons, let’s compare some common types of lights:

Above comparison is for Philips manufactured products having cool daylight temperature.

As you can see, while a 9W LED is brighter than 15W CFL, it cannot replace 18W CFL and comes nowhere close to a normal tube light, which is 3 times brighter!

However, for my usage, 9W LED was bright enough. Since it was used to replace a 14W CFL and as expected, it was actually brighter than the CFL (perceptible difference in brightness was observed.)

This particular light in our home is lit almost 24×7 and thus translates into a saving of 3.6kWh per month or 43.8kWh a year i.e. a yearly saving of nearly Rs. 260!

That is a whopping saving from a single CFL being replaced by an LED and frankly speaking, I got that LED bulb cheaper than what I normally shell out for a CFL! LED bulbs are also supposed to last longer than CFLs, but that is something only time will tell.

Overall I am quite happy with my purchase and I am contemplating replacing the 18W CFL in my room with these 12W LED bulb from Philips, which would be around 20% brighter than the CFL and at the same time, it will consume 6 watt less!