“I want to visit India – China border,” Neha’s words were echoing in my mind, as I applied for inner line permit at the DC Office in Leh.

Reality of it is, there is no India-China border in Ladakh. Closest thing to that is the LAC, Line of Actual Control. A grim reminder of the 1962 Indo-Sino War and the ongoing land dispute between India and Chinese controlled Tibet.

The best place to spot the LAC was in the Chushul Valley, en route to Rezang La War Memorial.

I had first visited Chushul during my winter trip to Ladakh in 2011 and had fallen in love with not only this quaint little village, but also the little valley it is nestled in, the Chushul Valley.

Now it was time to revisit Chushul once again.  (Permit system has been reintroduced in 2017, so you need permit for Nubra, Pangong and Tso Moriri as well), Chushul and a handful of other places in Ladakh still required inner line permit.

Since Chushul is so close to the LAC, that you can actually get lost and take the wrong trail and end up on the Chinese side (unless you’re first spotted by Indian patrol), access to it is controlled by the government through the inner line permit.

Only Indian Nationals can apply for this inner line permit; foreign nationals, NRIs, PIOs and OCIs are barred from obtaining permit to this sensitive region.

To get the permit, you have to visit the DC Office in Leh between 9:30AM to 3:00PM on a working day with photo copy of a government issued photo identity card eg. driving license, passport etc. (for each and every person traveling with you) and fill the inner line permit application. You have to mention your travel dates as well as the places you will be visiting eg. Chushul, Loma, Nyoma, Hanle etc. and submit the form, photocopies of ids along with appropriate permit fees.

Documents are duly checked, and in case ADC is present, you can take the application to him, get it signed on spot and walk out of the DC Office in less than half an hour, with your permit in hand. Cherry on top is the fact that officials at DC Office are really helpful and friendly.

Vast majority of tourists only go till Lukung and Spangmik. Only a handful venture beyond these and still fewer beyond Man Village, where the last luxury and comfortable accommodation can be found. 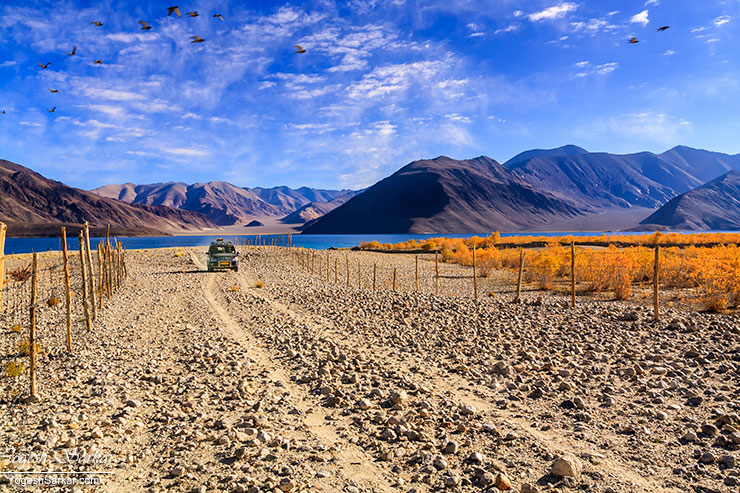 This is mainly due to the fact that people are generally short on time and the road, well the 8 ton road exists only on paper, instead what you have to drive on is this.

However, the drive is scenic to say the least. Because for the vast majority of the distance, you have to drive alongside the Pangong Tso and that not only makes it a journey to remember, it also causes you to stop often for photography. 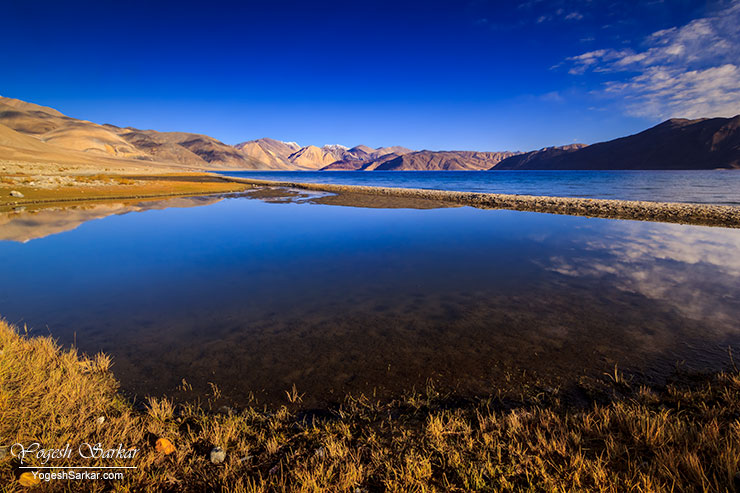 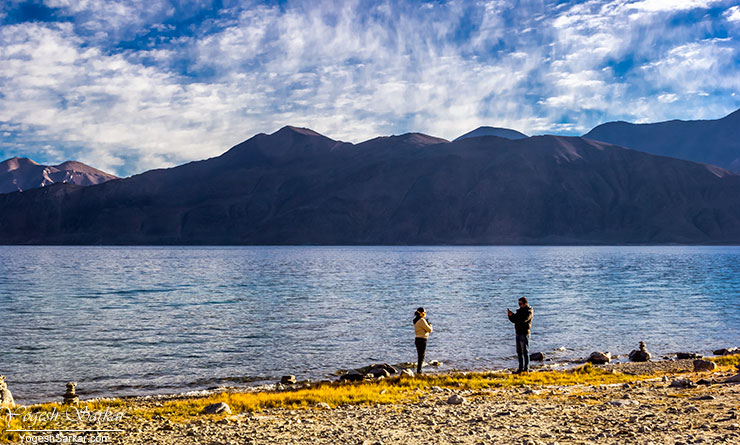 With only 3 villages between Spangmik and Chushul (Man, Merak and Kakstet), there is hardly any traffic on this route.

Even though the journey is only 45km long, it takes roughly 3 hours or more to complete, thanks to rough terrain and frequent photography breaks. Here is a time-lapse of our journey from Spangmik to Chushul.

As we drive along Pangong Tso, we have a handful of gulls and ducks for company, occasionally; we spot Kiangs (Tibetan Wild Ass), fleeing Tibet and now settling in Ladakh. In Tibet it is hunted as food and in India it is largely safe. 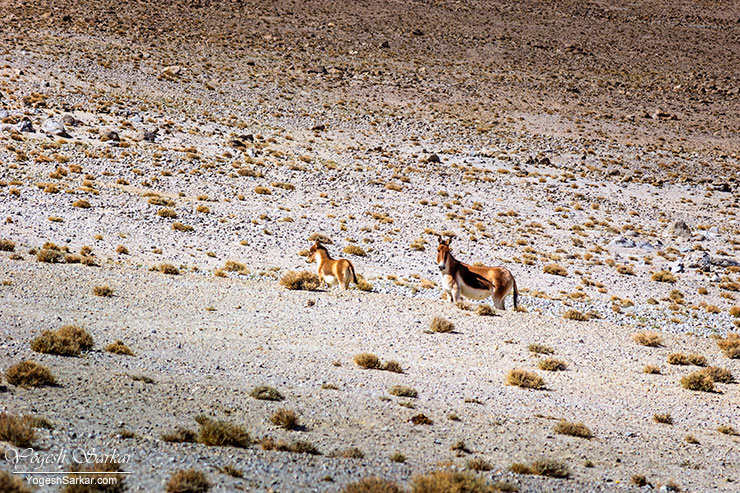 Apart from these, animals and humans are only visible in and around the villages. It is almost as if we have the whole of Pangong Tso to ourselves.

And we try and make the most of it. We even eat our packed breakfast as we drive along the Pangong Tso.

All the garbage we are producing is going straight to a packet, which would eventually be disposed off in Leh. We want to leave this place just as we found it, minus a few footsteps on the shore.

Few kilometers before Chushul, it is time bid adieu to Pangong Tso. 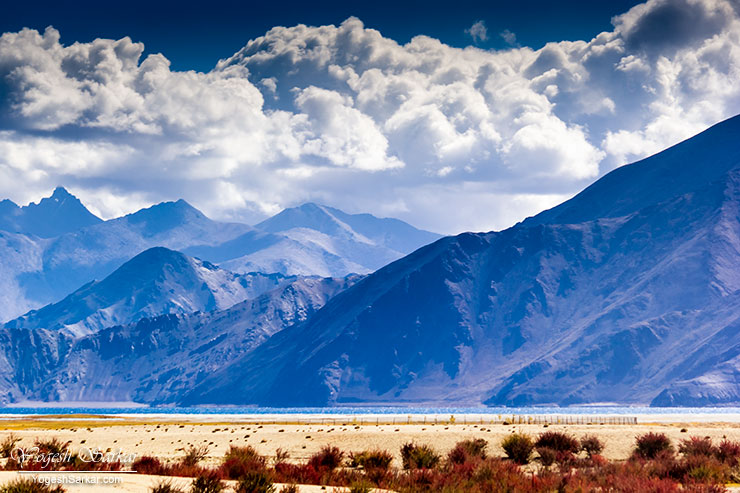 Sonam Angdus (+91-9469272773) has shown us an Indian post towards the end of our journey along Pangong Tso, and also the Chinese side. Neha and KP are excited to have seen this for the first time. However, there is more to come.

Sonam shows us a few roads and trails leading to Indian posts, darker mountains on the left are under Chinese control, while other brighter mountains are in India.

As we drive up to Chushul Village, flora and fauna becomes more visible. We spot horses, yaks, sheeps and Kiangs. It is a beautiful sight and we soak it all in. we stop towards the end of Chushul Village for tea and maggi. There is BSNL network here, even 2g data.

However, the primary lure of Chushul Valley isn’t Chushul Village. It is the 1962 War Memorials.

We see not only posts on the Chinese side, but what seems like a PLA vehicle as well. There is an ITBP truck heading towards Indian post as well. Even though it is far off in the distance and due to government restrictions we cannot shoot any photographs, it is all very exciting.

Then we come across the 1962 War Memorial dedicated to artillery. 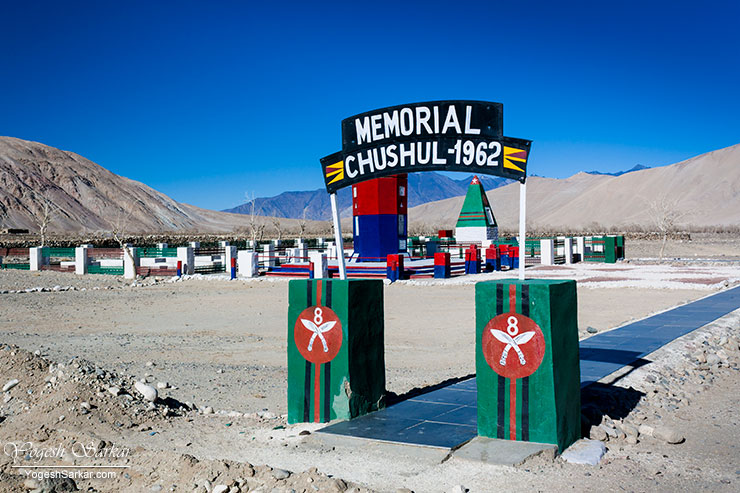 Next up is the Rezang La War Memorial, dedicated to Major Shaitan Singh and 114 jawans of 13th Kumaon, who paid the ultimate sacrifice, defending Rezang La pass from the advancing PLA on 18th November 1962. 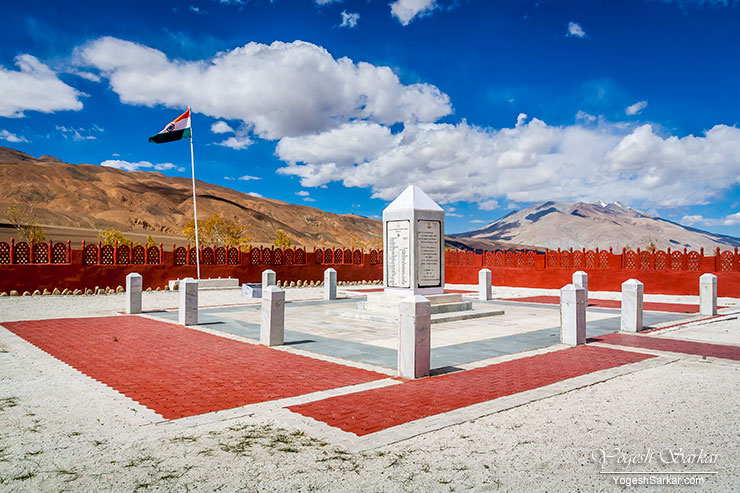 Words can never be enough to describe the feelings one feels while at Rezang La War Memorial, it is something that can only be understood, when you visit it in person.

And this I feel, more than the beautiful journey along Pangong Tso or the thrill of seeing the Chinese outposts is what makes the journey to Chushul truly worth it.

A journey, every Indian should take at least once in his/her life, to understand the true diversity, beauty and the unbreakable bond, that makes us all, Indians.