For the past few days, drivers err… driving partners of Uber and Ola have gone on a strike, complaining about reducing incentives and low fare charged by these app based taxi aggregators.

This has led to severe shortage of cabs in Delhi, resulting in an almost persistent surge pricing and even with 217% the normal fare, no availability of cabs! 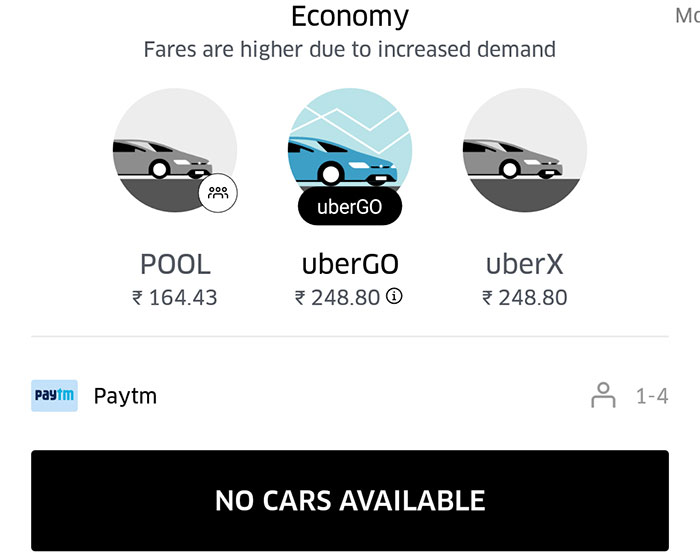 Auto drivers, who had started to somewhat toe the line and charge according to the meter, have now gone back to their olden days of rude behavior and higher than listed fare.

Cabs which are on the road are not only making a killing due to this surge pricing. They are also behaving in the same manner as auto drivers, refusing rides, as per their heart’s wish.

Due to all this, we the common people are suffering.

Yesterday, I had to come back from my friend’s place in Gurgaon. I would have preferred to take a cab till metro station and then a metro back to home. However, thanks to this strike, there were few if any cabs available. Those which were available weren’t in a mood to even travel couple of kilometers to pick us up, because the distance for which we wanted to hire them was less than 10km. Even though, surge pricing had already made the ride costly.

After numerous refusals and wasting over an hour. I had to swallow the hard pill and book the cab till home. Only then a driver agreed to come for the pickup.

I ended up paying Rs. 835 for a trip, which wouldn’t have costed more than Rs. 570 on a normal day and I had to shell out Rs. 700 more than cab + metro + electric rickshaw option I wanted to take.

All thanks to this strike by Ola and Uber drivers, which is fueled by nothing but greed!

After all, these are the same people who had abused the number of rides based incentive Uber had earlier, by running taxis only during peak hours, putting fake trips and refusing longer rides, so that they could hit their incentive requirement in the shortest time possible and then go home.

Add to that, plenty of people had bought vehicles, hired drivers to run them under Uber and Ola, in order make easy side money along with their normal job/business. This had led to excess inventory of vehicles on a normal day (supposedly there are over 1.5 lakh taxis running under Ola and Uber in NCR) and thus fewer rides available for the drivers.

On a cab ride home couple of months ago, an Uber driver had told me, that the only people who will be able to actually survive under these companies will be the real cab drivers, who have their own vehicles and are by profession, drivers!

Rest who had switched to these companies in hopes of easy money, will have a tough time, as incentives dry up and number of vehicles on the road increases. Because a professional cab driver in Delhi is used to earning 20-30k a month and putting in the required hours.

This is something those with hired drivers or ones which had switched from another profession, won’t be able to do.

Seeing the scenario today, I don’t think he could have been truer.

For now, we the commuters, the real reason behind the success of these cabs, are being fleeced and inconvenienced for the greed of few.