AS and I had gone to Bhatelia to pick up beer since Mukteshwar doesn’t have a liquor shop and while one can buy illegally from an eatery near IVRI, we decided to head to Bhatelia instead. En route AS spotted a path to a resort and she wanted to check that out.

After exploring the trail to Dyo, The Organic Village Resort; we walked back to the road, hoping to find a vehicle back to Mukteshwar. While we didn’t spot any vehicles initially, we did see Chaandi Maati. Sort of tired of the walk, we decided to check it out and once there, I had their Pudina Nimbu Paani (mint lemonade).

It was absolutely delicious and the ambiance of Chaandi Maati was lovely. So we made up our mind to visit it again tomorrow, en route to Haldwani.

Fast forward to next day, and we asked Manjeet to stop at Chaandi Maati, while we were traveling to Haldwani. Even though, we weren’t all that hungry.

In reality, we had come back for this. 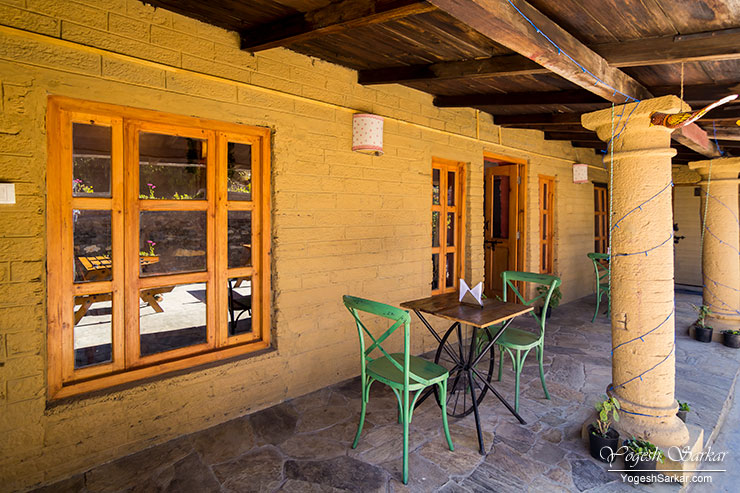 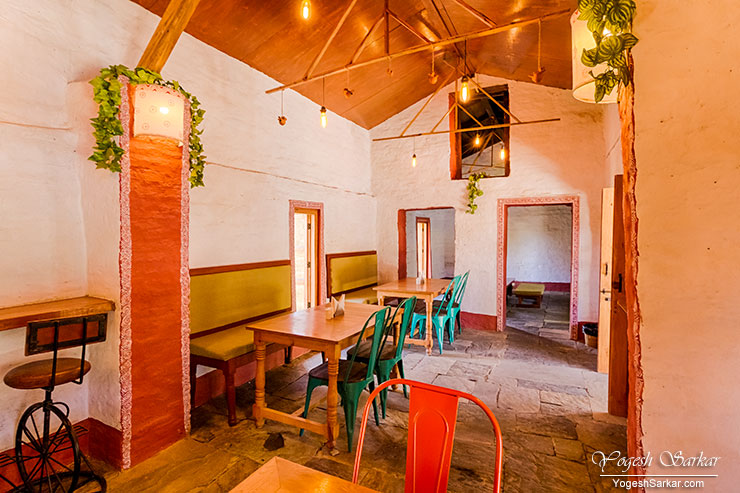 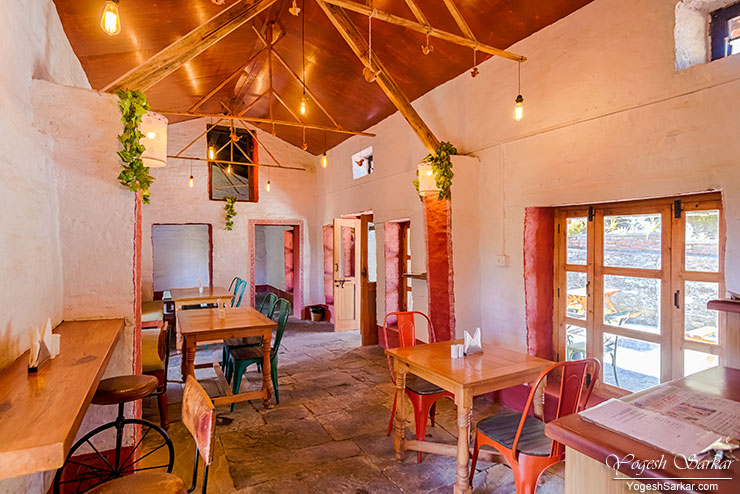 However, a restaurant is only as good as its food. After all, what is the value of stunning ambiance, if it isn’t backed up with an interesting menu and delicious food?

At Chaandi Maati, we found the menu to be quite interesting. 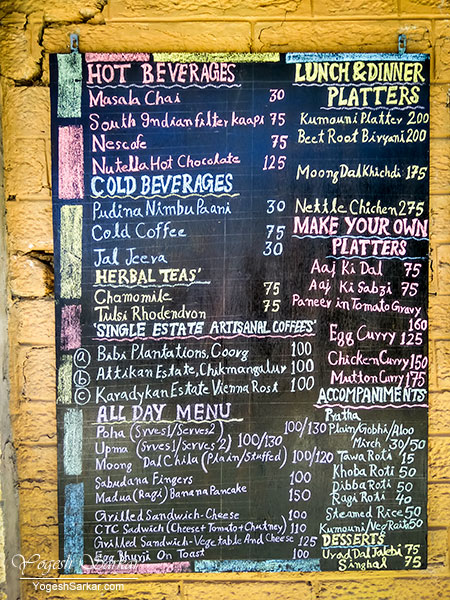 AS ordered their Tulsi and Rhododendron Herbal Tea, I decided to stick to Pudina Nimbupaani. 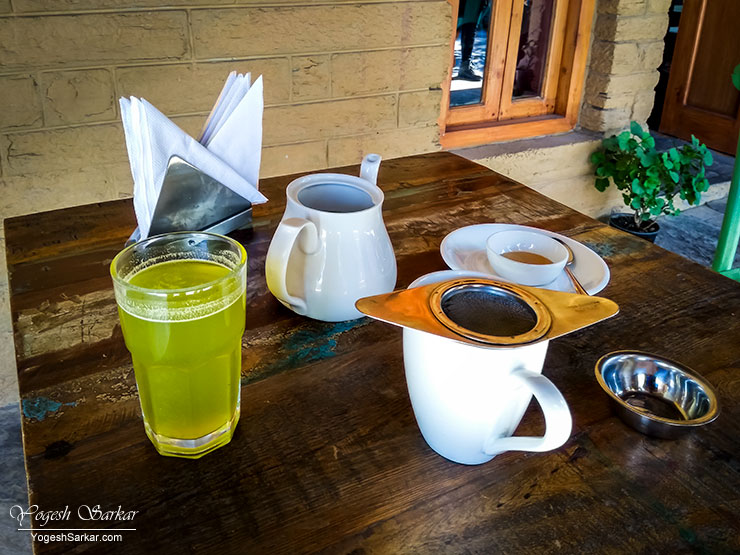 Tulsi and Rhodadendron tea was refereshing and had a unique taste. However, it was the pudina nimbu paani, which had won my heart yesterday and it managed to win it today as well.

Since we weren’t all that hungry and wanted to try out Kumaoni cuisine as well (more on that later), we decided to order somewhat light food, rather than a full-fledged meal.

Sabudana (tapioca root/cassava) Fingers had caught our fancy yesterday and we decided to order it along with Madua (Ragi) Banana Pancake.

First up was Madua Banana Pancake. 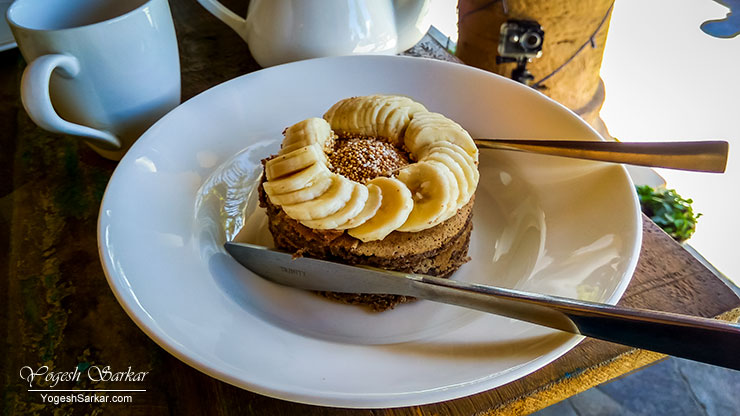 Even though I love madua ki roti, Madua Banana Pancake didn’t seem to catch my fancy. Even though it was an interesting flavor, for my taste, it seemed a little bland.

Sabudana Fingers on the other hand were finger licking delicious. Though they were so crisp, that it was nearly impossible to eat them with a fork! 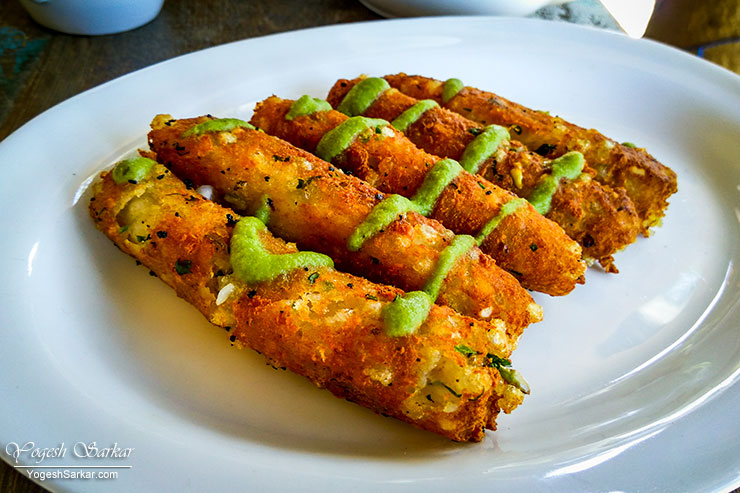 After a rather interesting and delicious meal at a beautiful café, along with a beautiful road leading to a stunning hill station, it was time to hop back inside Manjeet’s Alto and head to Haldwani.

However, one thing is for sure. If I ever visit Mukteshwar again, I will revisit Chaandi Maati once again and try something different from their interesting menu.