There was a time when I used to sort of laugh at people getting on the bandwagon to buy air purifiers, believing it would make them less resilient to pollution and it isn’t really needed.

Until, I too was forced by Delhi’s pollution to buy an air purifier, that too at the beginning of summer!

I have been suffering from severe bronchitis/asthma for over a month.

I have tried medicines and inhalers, but they only bring temporary relief. Yes, I have been lax in following up with the doctors and I have just now gotten my blood tested for various things.

However, I have been suffering, day in and day out. Forced into the confines of my home for over a month, only going out to the hospital or a short walk in the veranda.

So much so, that I finally decided to bite the bullet and buy an air purifier yesterday.

Deciding to buy an air purifier is one thing, choosing which one to buy is altogether different and more difficult task.

After all, there are no standards in India as such to test these things and the reviews and so called comparisons on the net, frivolous at best.

In the end, I knew a couple of things for sure:

These two criteria helped me narrow down my choices to Mi Air Purifier 2 and Philips 1000 Series AC1215/20 Air Purifier.

I have couple of Mi phones, fitness band, and power bank at home and I love how Mi gives you value for money. And the same was also true for its air purifier, which had fabulous specs.

Mi Air Purifier 2 is a smart device, it can be controlled from the app, consumes less electricity, shows you actual PM 2.5 pollution level in the room and had a single three in one filter (simple mesh, carbon, and HEPA), which costs Rs. 2,499.

Philips 1000 Series AC1215/20 Air Purifier, on the other hand, had the brand name of Philips and the basic functionalities to get the job done. No fancy apps or a way to show PM 2.5 levels, just light indicators which show the quality of air as red (very unhealthy), red-purple (unhealthy), blue-violet (moderate) and blue (good.)

There are three separate filters in Philips air purifier with the first one being similar to the one found in Split-AC and user cleanable. Second being carbon based and the third being a HEPA Series 1 Filter. Carbon filter costs 2k and HEPA filter costs 2.4k.

Based on this, one would think, that I would have gone for the Mi Air Purifier.

Well, tempted as I was, I decided to go with Philips. 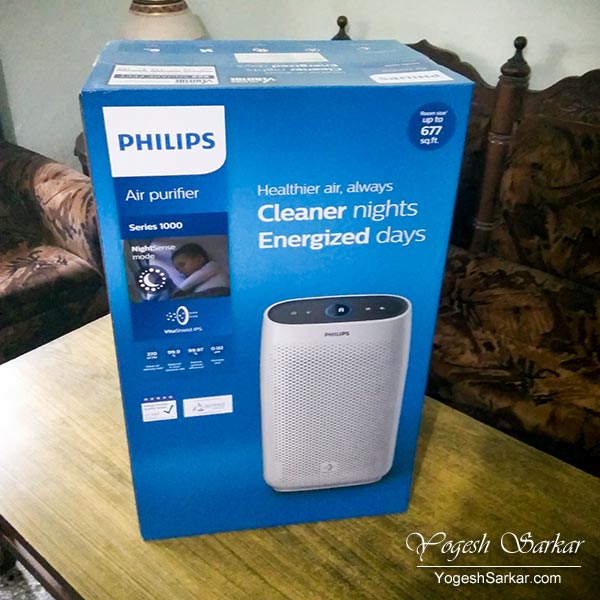 The reason behind this was fairly simple.

I liked the fact that I can easily clean the outer AC type filter myself on a regular basis. Seeing the state of my AC’s filter after a week’s use, I have little doubt, my air purifier’s filter would start getting clogged as well.

With Mi, I would either have to keep using the filter like that and change it more frequently or clean it with the help of a vacuum cleaner, which will likely lower its efficiency.

At the end of the day, the real expense of running an Air Purifier is the cost of filters over time. And based on this assessment, I felt, I would be changing the filter more frequently in case of Mi, than in the case of Philips.

So I decided to take the plunge and ordered it from Amazon yesterday and today it was delivered.

When I switched it on, it showed my room’s air quality as red (very unhealthy) and it only switched to red-purple (unhealthy) after about 15 minutes.

However, I didn’t need any indicator to tell me anything. My wheezing, which had been going on since last night was all but gone and the air felt lighter and more breathable. While it mostly stuck to red-purple and only reached blue-violet (moderate) couple of times, air noticeably got better.

However, a dust storm outside caused it to turn red again (one of the doors and a window of the room is open). Indicating the quality of air has gone down, though it didn’t felt as bad as it was, earlier in the day. 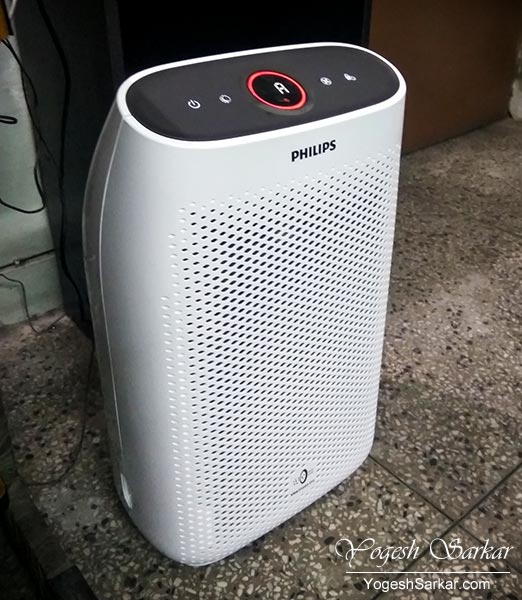 I have no clue, how this will pan out over time and whether Philips 1000 Series AC1215/20 Air Purifier prove to be a worthy investment. However, for now, it seems like money well spent. Something I now feel, I should have bought earlier!

Rest only time will tell, and I will surely post a more detailed review of it few months down the line.