Ever since we last visited Smoke House Deli, we had been planning to go back there again, to try out their Banoffee Pie, which wasn’t available the last time around. This Tuesday, I finally decided to step out of the house after a long illness and headed to CP, to have my pie!

However, I got delayed en route and by the time I reached there, RD had already bought Banoffee Pie jar from them and reserved a table at Odeon Social. 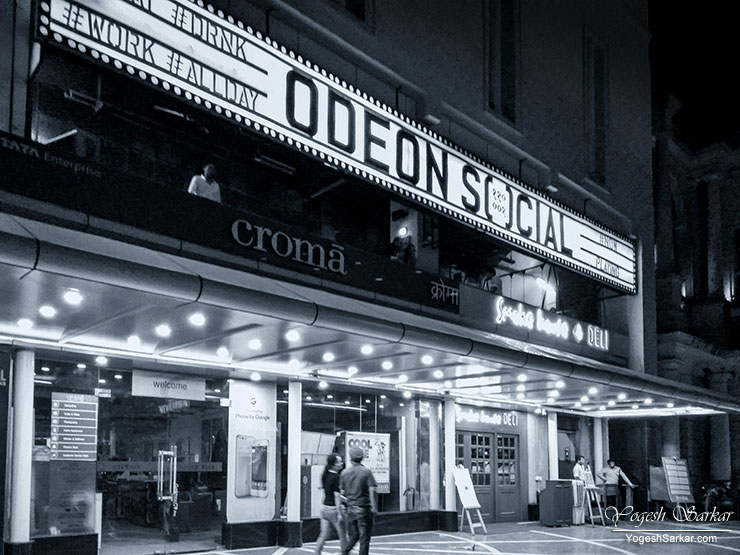 I had visited Odeon Social last year and had been disappointed by their slow service. So stepping inside, I was praying, that I do not have the same experience again.

I don’t know whether it was due to the heat or end of the month, however, Connaught Place and even Odeon Social had very less crowd. Thanks to this, we easily got our table.

The ambience of the Odeon Social is sort of quirky, it is sort of an oddball mix of a school and a prison. I guess they feel both are the same. Some will like it, some will just ignore it like I did and concentrate on food and drinks instead. 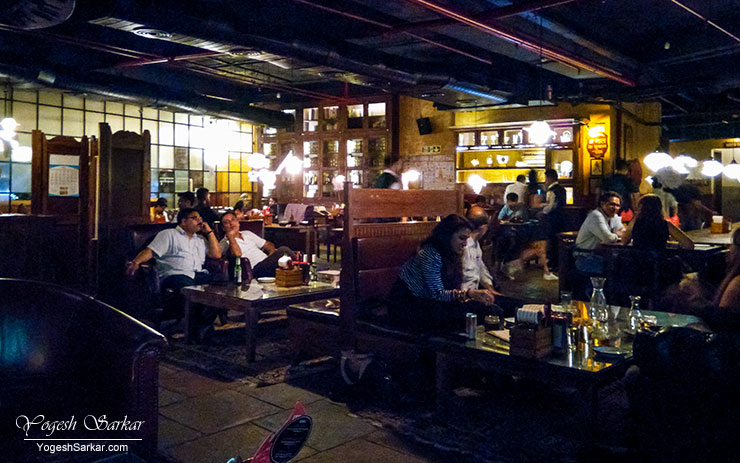 One of the reasons we went to Odeon Social was because RD wanted to try their half-liter LIIT. So the first thing we did, was that we ordered Toxic LIIT (Vodka + Gin + Tequilla + Rum + Triple sec + Apple and Cranberry Juice) for her. 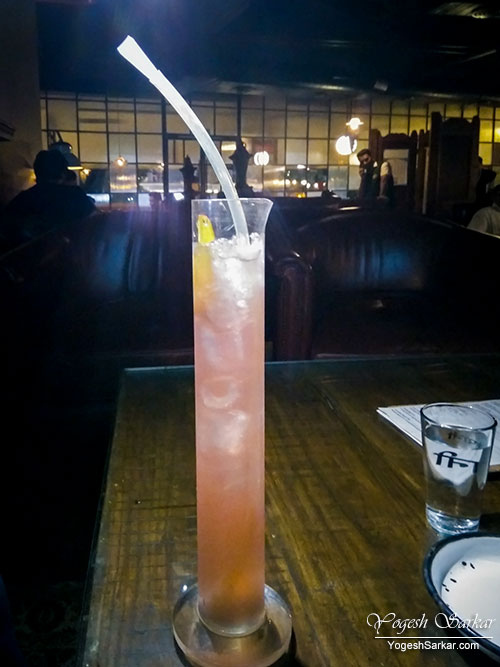 LIIT was delicious, though seemed to have a little less kick (taste wise) than their Electric LIIT, which has Blue Curacao and Red Bull.

I ordered a Hot Shoddy for myself, which was made of Brandy, Honey, Fresh Cinnamon, Cloves and a slice of Orange and Apple. It was served warm and in a bamboo glass, and was really soothing for the throat. Though it did taste more like a medicine than a cocktail. 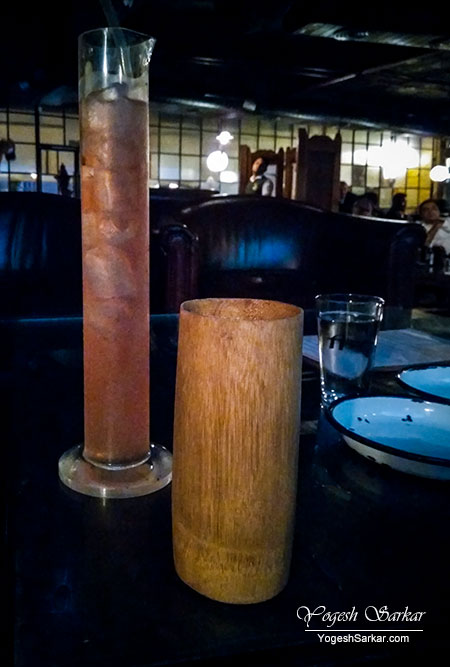 In terms of food, Odeon Social is a disappointment for vegetarians. Options are severely limited and to make matters worse, we didn’t spot the extended menu left casually on our table, until after we had ordered everything!

Cheese Masala Pao that we ordered first was really delicious with melted cheese and stuffing in a soft pao hitting the taste buds at the right spot. 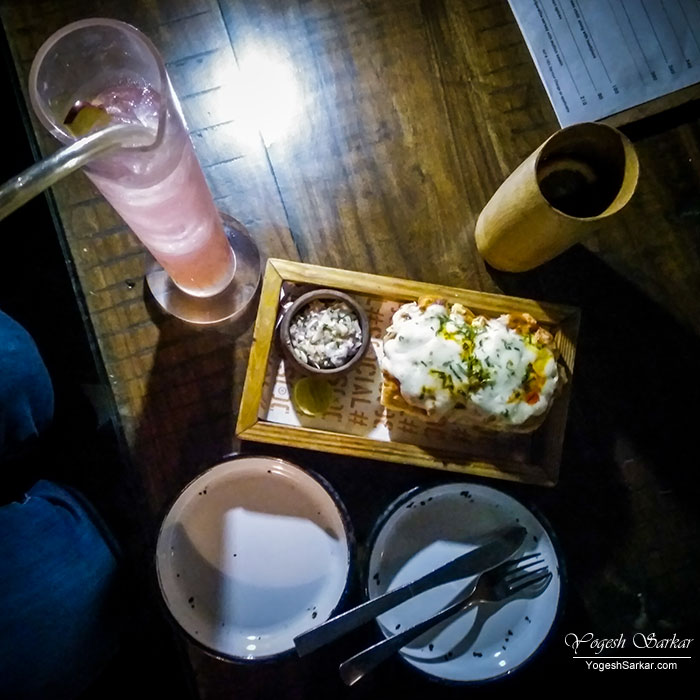 Crispy Sesame Honey Chilli Fries (glorified name for Honey Chilli Potatoes) were a disappointment, quantity and taste wise. We had to order mayonnaise to make it palatable enough.

Achmed’s Mezze Platter consisting of Falafel, Hummus, Baba Ghanoush, Tabouleh, Cheese Awesome and Pita Bread was really fulfilling. Taste wise it was good as well, though Falafel and Hummus were really dry and not as tasty as the stuff you will find on the streets of Pushkar! But then again, I am yet to find Falafel and Hummus in Delhi, which taste as good as the street food found in Pushkar. 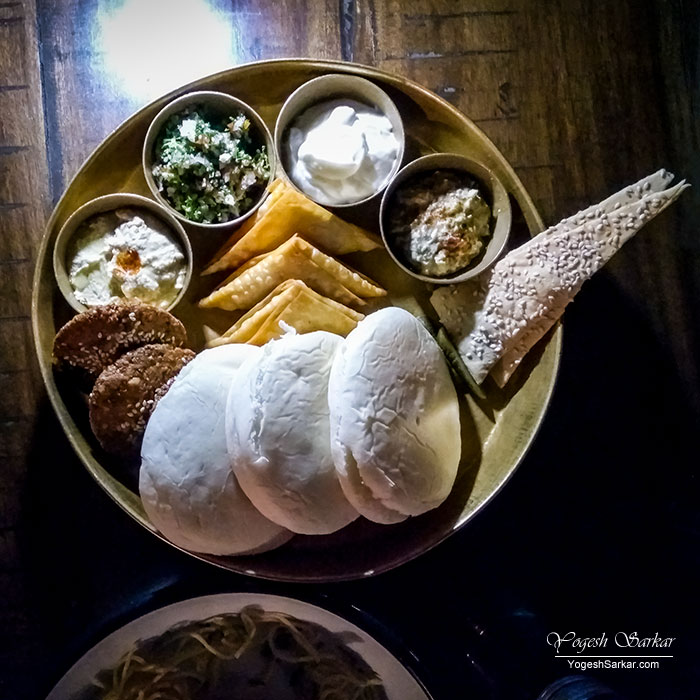 Overall, our experience at the Odeon Social was a mixed bag. We had a lovely time there, and food and drinks, on the whole, were good. Service though was okish, yet much improved from the last time. Then again, the place wasn’t filled to the brim.

In my view, the whole idea of an extended menu is a bad one, especially when your waiter does not explicitly tells you about it. Had we known about it earlier, we would have likely ordered pasta, but we couldn’t!