I had been thinking about watching a movie at PVR Logix 4Dx theater for such a long time. After all, while 3D movies are fun, 4Dx promises to be something altogether different and special.

With seats that vibrate and move, the fog that appears next to the screen, water vapor along with various scents which are sprayed in front of your face and feet, it is supposed to be a theater experience none like other. 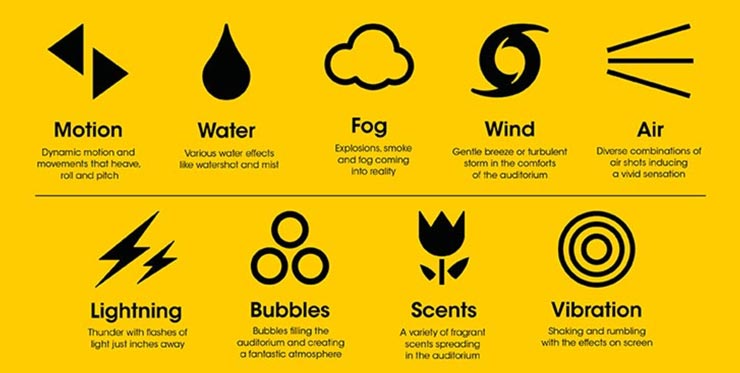 At least this is what it promises to be.

So when Wonder Woman was released, I decided to watch it in 4Dx. With the PVR 4Dx in Logix City Center Mall, Noida, being just about the only choice for us NCR folks.

At Rs. 450 a ticket, 4Dx tickets aren’t cheap. Especially when you consider the fact that you can watch a movie at PVR Logix for as low as Rs. 150. For those used to watching movies in Delhi and Gurgaon, it is only a little bit extra, an expense easily covered, if you do not get popcorns and a cold drink.

The movie hall and seat ergonomics

4Dx hall isn’t all that big, with just 92 seats. Seats while comfortable, aren’t very wide and feel like typical movie hall seats. However, they cannot recline and you have to keep your feet placed on a footrest. So in the end, it feels a little less comfortable.

It seemed more like a normal 3D screen than something like the IMAX Experience with a large screen. Since I had chosen the seat in the last row, the screen just didn’t seem immersive enough. 2nd to 4th row from the top ought to offer the best view.

Sound quality was fairly good, no complaints here. Maybe it was a notch below IMAX, but once again, it is really hard to tell the difference.

Before we talk about the extras, let’s talk about the quality of the 3D screen. This I felt was one of the best if not the best I have seen till date. Things really seemed to come alive in 3D and it appeared to be a much more immersive experience than it usually is at movie halls. Add that to the beauty of Wonder Woman (Gal Gadot and the movie :p) was really immersive and best suitable to be watched on a 3D screen than a normal one.

However, the really fast motion did appear a little jittery. Thankfully, glasses weren’t scratched up or dirty, which at times can be a case with 3D movie halls.

Now lets come to the experience of 4D, the real reason I paid for the ticket and commuted all the way to Logix to watch it.

As far as the motion seats go, they provide a really immersive experience in panning and flying shots, it really does seem like you’re moving along with what is happening on the screen. However, in the case of scenes with horse riding or in the case of fighting scenes, it did seem a little out of sync or at least not able to convey the motion or sudden movement.

Scents were really limited, for instance, there was no ocean smell so to speak. This is something one would have expected to be easily reproduced and essential for the opening scenes of the movie. Still, it was nice since it was only the good scents which were sprayed out, none of that bad odor.

Fog coming out next to the screen to complement what was taking place on the screen was a really fun sight to watch and add to the overall experience.

Water vapor and wind being blasted off to your face and feet were one of the most fun if not the most fun part of watching the movie in 4D. Though in the case of explosions, I would have liked the gust of water vapor and air to be a little warm to convey the feeling of a hot explosion. However, that is just me nitpicking I guess.

All the special effects in the world cannot make a dull movie great and I was happy to have waited until a good movie, worthy of 3D and 4D came out, before buying tickets for PVR 4Dx.

Wonder Woman is a wonderful movie, worthy of the DC franchise with an engaging storyline and action sequences, not to mention beautiful locale in the beginning of the movie, overall termed as Themyscira (combination of CGI and beauty of South of Italy.)

Having said that, lovely as Gal Gadot looks, her acting whilst she is in Themyscira is bad, to say the least. It is only in the later part of the movie that her beauty and acting truly shines.

Having said that, in comparison to some of the other movies to have come out of DC productions, acting as well as the story line isn’t top notch and there are some gaping holes in it. Plus the climax of the movie seemed a little over the top and at the same time, a bit boring.

4Dx and Wonder Woman go well together, and I really enjoyed it. I am glad that I waited for a movie like Wonder Woman to come out, in order to experience 4Dx, because, without good 3D picturization and interesting storyline, it wouldn’t have seemed as special as it did.

Sure it isn’t flawless and various parts of the 4D could have been a bit better coordinated and it badly needs more scents than the basic set. Yet, it was fun and something I would recommend you experience at least once in your life.

I would surely like to experience it once again, hopefully, fairly soon.