On Saturday, we decided to visit Farzi Café in Connaught Place, since DJ Gouri was supposed to perform there and we were in a mood to party and enjoy the delicious and innovative food, Farzi Café is known for.

This wasn’t the first time I was visiting Farzi Café, I have visited their CyberHub branch a few times and I have been to this CP branch almost a year ago, so I sort of knew what to expect.

We arrived at Farzi around 9:15 pm and it was completely packed. So we got on the waitlist and headed to the bar to order a couple of drinks; a Heineken and a Shikanjvi Bunta. 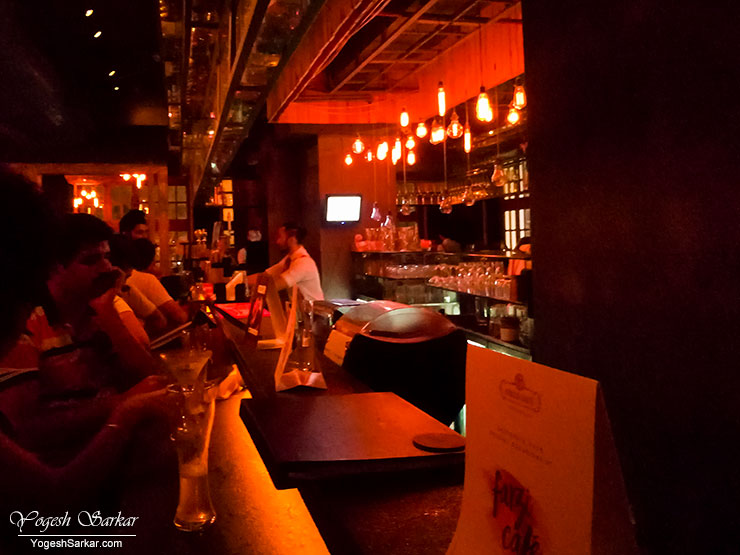 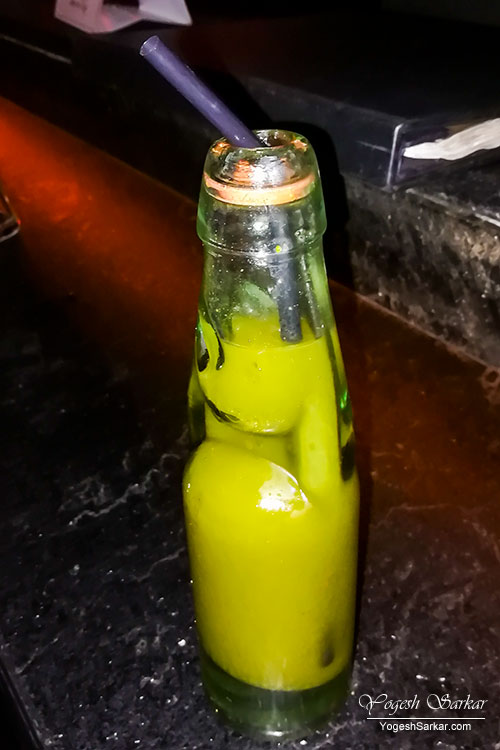 While the Heineken was absolutely fine, Shikanjvi Bunta didn’t taste all that good.

DJ Bhuvan was playing music, even though DJ Gouri was supposed to begin her performance from 9:30 pm.

At around 9:50 pm, I received an SMS from Farzi Café that our table was ready, so we walked up to the front desk and were escorted to our table, right next to the stage. Great place to catch the performance, terrible place for conversations.

At 10 pm, there was still no sign of DJ Gouri. Though our tandoori soy chops, cheese and nut fudge with burhani cream was served. 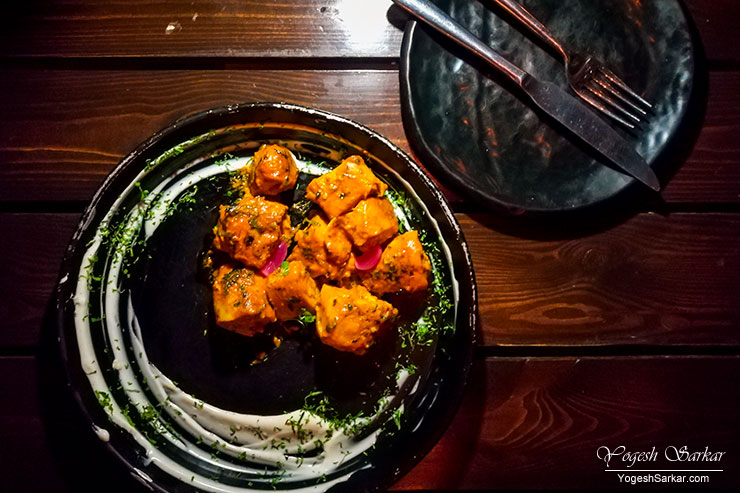 They weren’t hot, sort of lukewarm. Not sure if that is how they were supposed to be, but they tasted delicious! The only shortcoming was the minuscule amount of burhani cream they were served with since that was tasty as well.

For the next round, we ordered Four Cheese and Garlic Pizza, along with another Heineken and a Long Island Ice Tea.

In the meanwhile, DJ Gouri arrived around 10:30 pm, surrounded by bouncers, and immediately started playing. 10-15 minutes later, she introduced herself to the crowd and kept on playing. 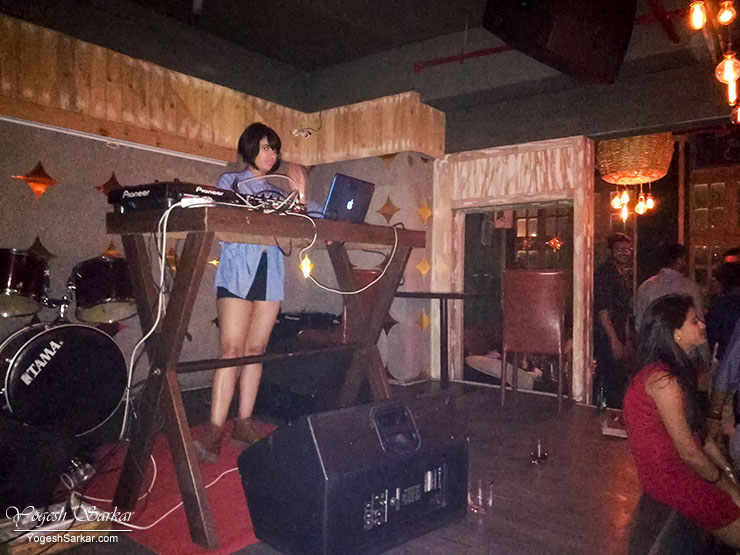 In the meanwhile, our Pizza arrived. 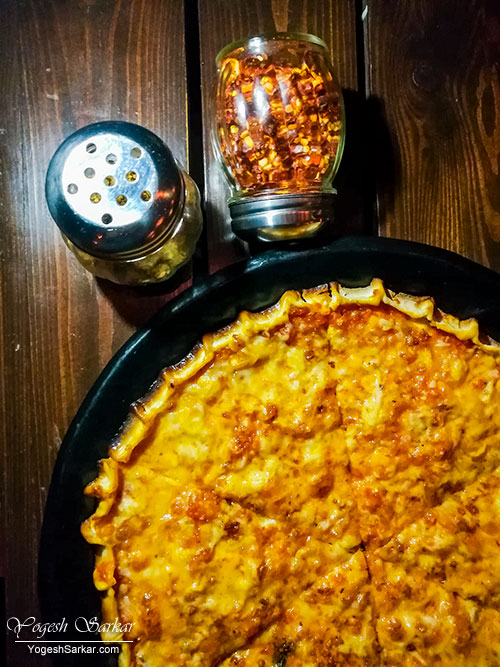 The pizza was decent, thin crust and with good flavours of cheese. However, once it got cold, it sort of tasted like roti topped with cheese. I guess we should have finished it at a faster speed to avoid that phase :D.

LIIT was strong and good, no complaints there. Though not in the same league of the one served by the Odeon Social. 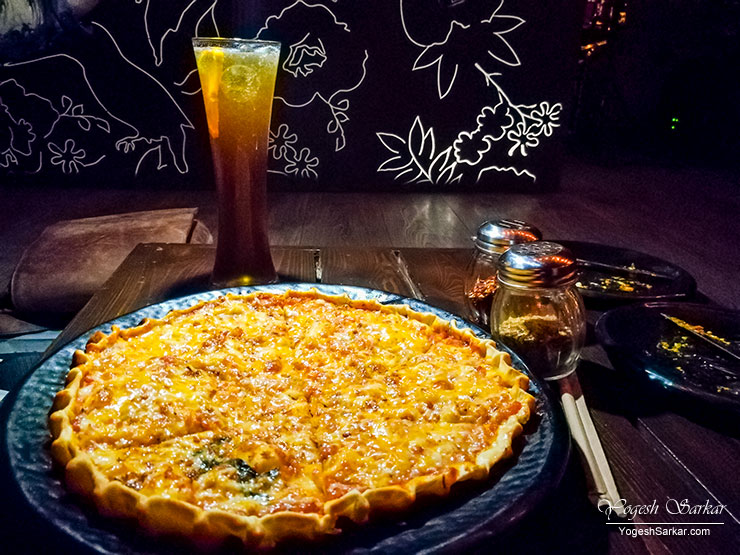 People started taking to the makeshift dancefloor next to our table and we too decided to join in. Even though DJ Gouri wasn’t playing all that good. In fact, we were sort of missing DJ Bhuvan. Sadly or thankfully, she left around 11:30 pm, after playing for an hour and arriving an hour late at the venue. During the course of her performance, on at least half a dozen occasions, people went up to her to ask her to change the song! Apart from this, she kept on breaking the rhythm, playing full-length songs and playing a collection most people didn’t find friendly to dance with.

After she left, DJ Bhuwan took over, which was a slight relief. Overall, the music on Saturday night left a lot to be desired. Even though we danced nonstop for around couple of hours and finally left the Farzi Café at around 1 am.

Overall the food was decent, on earlier occasions, it was better and same can also be said about the service. I guess some of that can be attributed to the fact that they were thoroughly packed and it was a Saturday night. But then again, I expected more from Farzi, since I have had nothing but great experience with them.

Music, on the other hand, left a lot to be desired and almost made us leave for another club.

Overall a fun night, which could have better.