The Big Book of Animal Stories is the third novel I have read, written by Ruskin Bond, others being Rain in the Mountains and The White Tiger and Other stories. 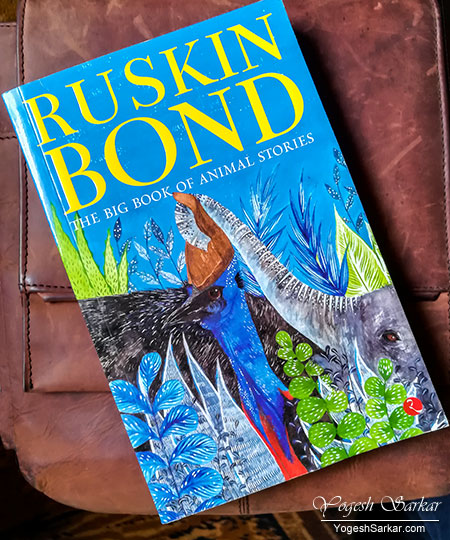 Ever since I read Rain in the Mountains, I have become a fan of Ruskin Bond’s writing, which happens to be extremely easy to follow and yet, thoroughly descriptive of the people, places, events, and animals he encounters.

The Big Book of Animal Stories is no different, writing is easy to understand and the narrative is easy to follow and yet, engaging. All the small stories and poems contained in it, are devoted to animals in one form or the other.

Yet, there are a few that stands out.

A crow for all season is a tale of a crow, with the narrator being none other than the crow himself! His favorite pass time includes stealing toothbrushes from the neighborhood and a love-hate relationship with the Junior Sahib!

It was hilarious to read about all the incidents from a crow’s perspective, including the time his neck gets caught in a napkin ring and other crows, who dislike any crow which doesn’t look fully like a crow, attack him. Despite trying to reason with him and his own cousin, who lives with him, the attack only ceases, when the napkin ring falls off and all of them back off and start looking for the crow with the napkin ring!

Then the story about A Tiger in the House was the one I liked the most, especially it’s ending, wherein grandpa visits the zoo to meet the Tiger he had donated to them 6 months ago (Tiger was raised by him). Plays with him through the fence pats him and even slaps him once, before going to zoo authorities to complain about the leopard who repeatedly scares off his poor Tiger.

Only to learn from a zoo keeper that the Tiger he had donated had died a few months ago and the one licking err… tasting his hands is a wild tiger, captured in the wild!

Other stories were just as engaging and at times, as hilarious as these.

However, having read Rain in the Mountains, there were a few stories which were repeated here and in the case of a couple of them, there were a story and a poem about the same instance in this book, making it seem a bit repetitive.

Overall, I really enjoyed reading The Big Book of Animal Stories and would recommend it to anyone looking for stories about animals in India (including a few which seem like folklores) or a light yet, engaging read.