We, the humans, are voyeuristic in nature. We love peering into other’s life, and in case a person happens to be famous, our curiosity for them only grows stronger. This is one of the reasons why autobiographies seem to do so well. After all, they let us into the mind and life of those we adore, even if it is limited to what that person wishes to share with us. 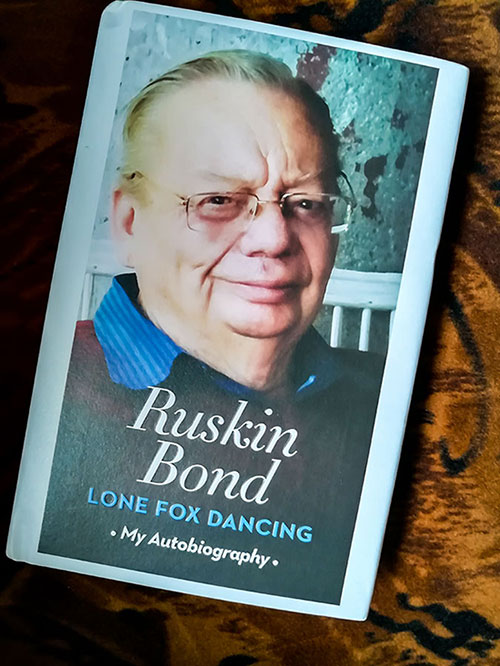 So when I first heard about Ruskin Bond’s autobiography, Lone Fox Dancing, I knew it was something I couldn’t afford to miss.

I wished to not only know the life of the author behind some of my favorite stories; I also hoped to know the story behind those stories. If for nothing else, than to satisfy my voyeuristic lust!

Lone Fox Dancing was everything I expected and more.

Even though Ruskin Bond was 82 years young while writing this autobiography. The vast majority of it is dedicated to his childhood, a period which he seems to adore and recalls vividly.

Mainly due to the fact that he loved his father a lot and loved the time he spent with him, even if it meant he was left to his own devices for vast majority of the day in hot sweltering Delhi, while his father (having separated from Ruskin’s mother) went to work in the Royal Air Force during the second world war.

This did help shape the destiny and attitude of the Lone Fox, as he got used to being on his own, reading books, listening to music and exploring the world around him.

Something that only got engrained further as he moved to the boarding school in Shimla, Bishop Cotton School and then had to deal with the tragic loss of his father and deal with an uncertain future, including the prospect of being sent to an orphanage!

Then he had to deal with further harsh realities of life, including turning up at the Dehradun Railway Station alone at the age of 10 years and realizing, no one had come to receive him and he did not even know, where his mother’s new home was!

Moving to England in hope of becoming an author too failed miserably for Ruskin, as he had to deal with loneliness, rejection, a broken heart, and disillusionment of a dream. Needless to say, he missed his life in India, a country he was born and brought up in, and yet, where he continues to be treated as a foreigner!

Moving back to India and struggling to make the ends meet as a writer, only stands as a testament to the life of a man, who persevered and never gave up on his dream, even though he could have lead a more comfortable life writing press releases for an American NGO in Delhi!

Of course, heart breaks do happen, even to the men seeking solitude in the Himalayas and that is when the ancient Himalayan remedy of “a bear in the plum tree”, helps them get over it and once again breathing life in to words and turning them into stories, which will be remembered, long after the broken heart eventually stops beating.

Lone Fox Dancing is the story of a wonderful author in the Himalayas, who has lived a difficult and at times, tragic life, and yet, entertained and reinvigorated us with his wonderful stories. A man who continues to write, and will likely continue writing, until he can write no matter. And, has enough stories and wisdom left to write another autobiography. Something I eagerly await…