There are few things as exciting as getting to play with a brand new camera and yesterday at Canon India’s Sense of Genius Bloggers meet, I got to do just that. I got to play with not 1, but 2 cameras; Canon 6D Mark ii and Canon 200D. 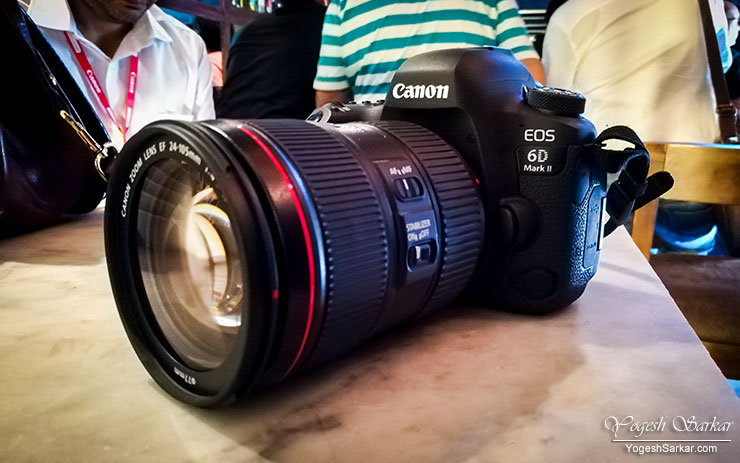 Canon 6D Mark ii is an upgrade to Canon’s entry level full frame DSLR, Canon 6D. And when it comes to upgrades, they don’t get any more substantial than this!

A brand new 26-megapixel sensor replaces the older 20-megapixel sensor and is aided in its processing by the new Digic 7 processor. Focus point count has gone up from 11 to 45 and more importantly, now the focusing in live view is faster and more accurate with good subject tracking during video shooting.

3” LCD screen from the 6D has been replaced with a 3” fully articulated screen with a touch screen, which not only helps you swipe through photos and easily navigate menus but also allows you to use it to do touch focusing during photo and while shooting videos!

Here is an unedited video from Cannon 6D Mark ii, shot between ISO 4000-6400 with 24-105L ii lens. The change in focus (mainly in the latter part of video) is using the touch focus.

Canon 6D Mark ii also has built-in GPS, WiFi, NFC, and Bluetooth. And while it did take a bit of an effort to initially setup WiFi, it worked well afterwards and for those with NFC, it should be a pretty straightforward process.

Unfortunately, there is no headphone jack and you’re limited to 1080p video at 60fps with IPB profile and MP4 codec.

Canon 6D Mark ii also features HDR video (different from HDR10+ or Dolby Vision), which sadly only works in scene mode and doesn’t let you manually control the exposure or even aperture and is limited to 30fps.

You can also shoot time-lapse with Canon 6D Mark ii without the need for a remote, thanks to in-built time-lapse feature. However, max number of frames you can input is 99 or unlimited and the output is in the form of a video file (up to 4k). I would have liked to see an option to output individual RAW files so that I had the flexibility of editing them myself. On the plus side, with WiFi or Bluetooth connectivity, you can easily use the Canon Connect app on your mobile phone as remote and shoot time-lapse.

Overall Canon 6D Mark ii is an interesting camera and adds many of the features missing in DSLRs, that we have grown accustomed to with the advent of smartphones. Hopefully, I will be able to do a full review of it later, for now here are a few sample full resolution images (all high ISO shots) from Canon 6D Mark ii, shot in RAW and exported to JPEG through Lightroom CC (60% quality), without any post processing.

Canon 200D is the successor to Canon 100D, which isn’t the entry level DSLR, rather a lightweight DSLR marketed to ladies and those who are in search of better image quality than point and shoot cameras (and phones), but don’t want lug around a heavy DSLR. 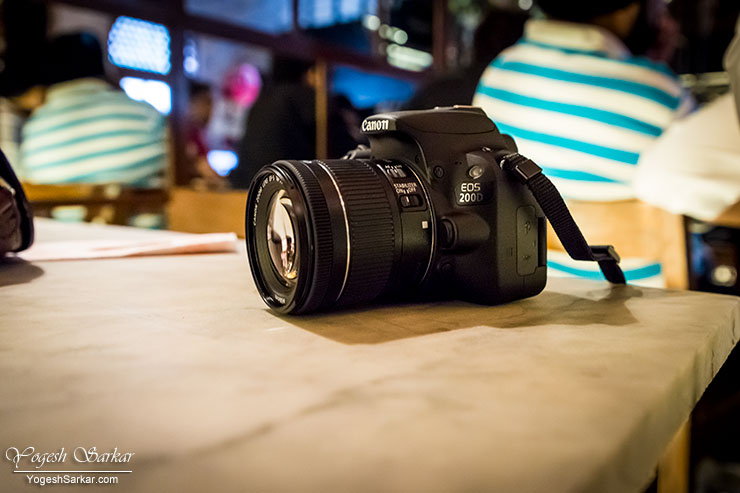 It too has received sensor upgrade and it now comes with a 24-megapixel APS-C sensor with Digic 7 processor. This has resulted in a max ISO increase from 25600 to 51200. Even though a number of focusing points are just 9, with dual pixel technology, focusing is fairly fast even in live view.

It too gets a 3” fully articulated touch screen along with WiFi, NFC and Bluetooth. A new battery effectively doubles the number of photographs that can be taken from 380 to 650 and the video mode to has gotten an upgrade with a stereo microphone and 60fps shooting at 1080p.

Just like the Canon 6D Mark ii, it too can shoot time-lapse videos or you can use a wired/wireless remote or your smartphone to shoot the time-lapse sequence.

For a lightweight camera, Canon 200D does a lot, it even has a selfie mode to help you take better quality selfies than your smartphone. But then again, in today’s market, where smartphone’s camera is getting better and better, DSLRs have to become a lot more capable than their predecessors, be it on image quality or features we have gotten used to with our mobile phones. Canon 200D is a right step in that direction.

Overall, I found both the launches from Canon quite interesting and can’t wait to test them out in real world, to really get a feel of their true potential.