After a bad experience at Bunta Bar, we came out looking for a good place to eat and not wanting to travel a lot, started looking for good restaurants in the vicinity.

Soon we spotted Tourist; I had been here for the blogger event of Canon 6D Mark II and had loved the ambience and food. So we decided to play somewhat safe and went into Tourist.

Tourist is a fairly large restaurant. However, only part of it was open while we were there on Thursday night. This was a different section than where I had earlier been for the event and this section too was beautiful, done in travel theme, which both of us loved. 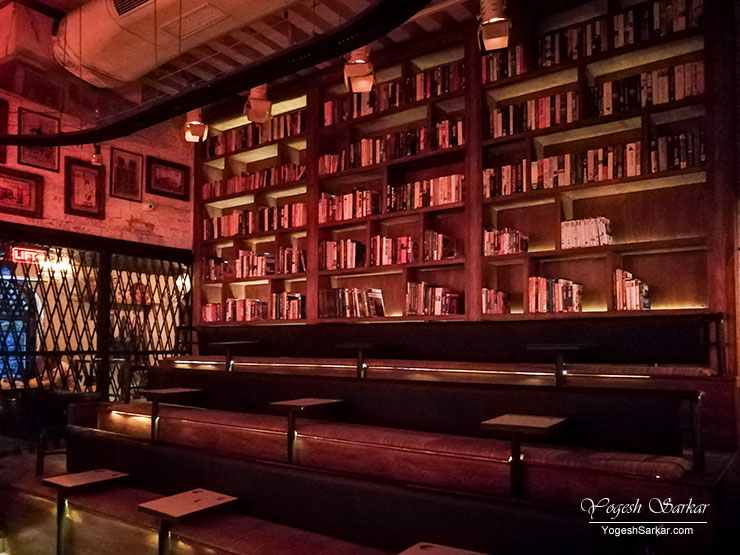 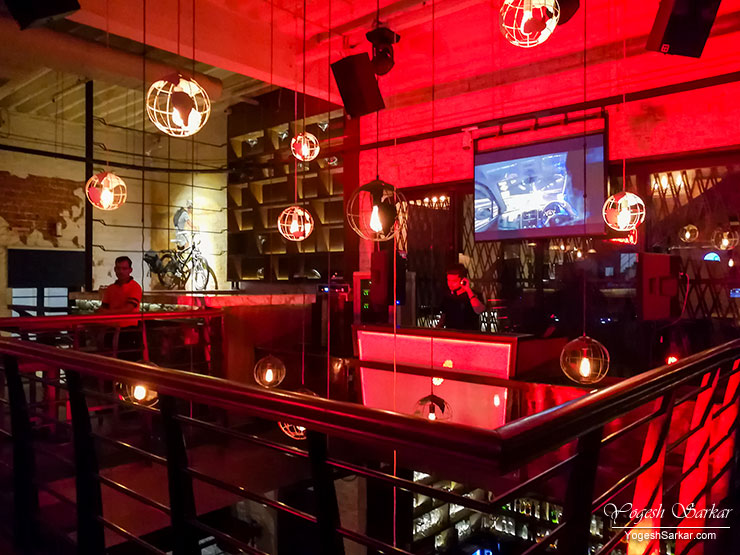 Tourist’s food menu is quite interesting and is made to look like a passport, and there are 4 such passports representing different regions of the world (there is also a drink menu apart from this.) 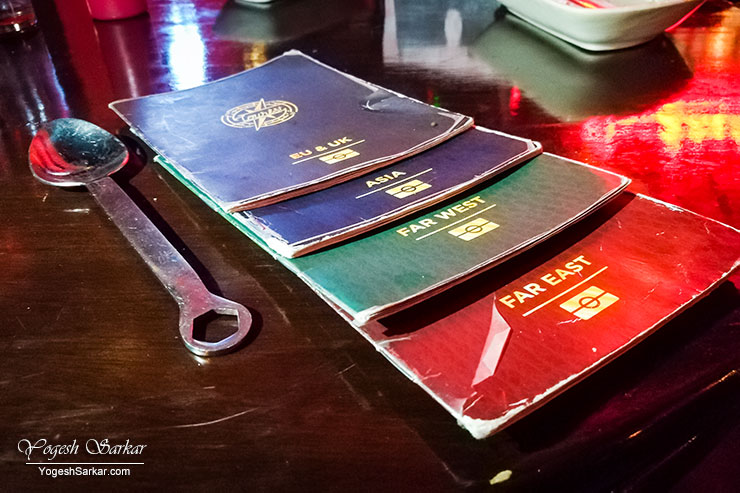 Even though there isn’t a huge selection of food items available. However, there is a decent variety with interesting names and both RD and I spent a lot of time going through menus again and again, in order to decide what to order. We have never spent so much time going through any menu and even then, we weren’t complaining.

So I ended up ordering Jammu’s Kaladi made of speciality fresh cheese from J&K and grilled on the pan and served with butter kulcha. 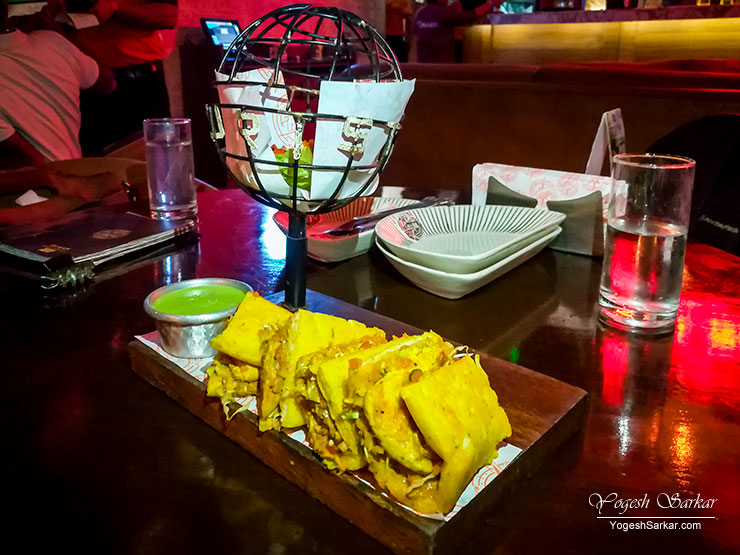 Even though I couldn’t really tell whether the cheese used in Jammu’s Kaladi was from J&K or not, since it tasted pretty much the same. Jammu’s Kaladi was delicious. Whether it was the butter kulcha, the stuffing, the sauce or even the onions in the globe basket, everything was finger licking delicious. On top of it, the presentation was top notch!

RD wanted to order LBB (Little Black Burger). However, it was only available in non-veg variety and she does not eat non-veg. So we asked our server, whether they could make it for vegetarians and after checking with the kitchen, he replied in affirmative!

So RD ordered an Off American V.C.B (cheeseburger with soya patty, melting cheese and crispy onion) with a black bun. 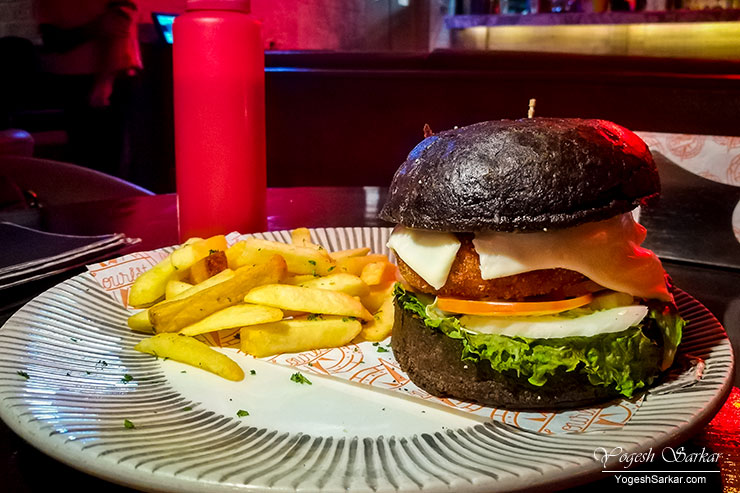 The black bun was just a little different in taste, not a whole lot from a normal bun. However, the burger was well made, though it had more of an Indian taste than American. However, it was good enough for us to not think of that factor as a negative.

For dessert, we ordered Darsaan, which is essentially fried noodles dipped in sugar syrup, served along with a scoop of vanilla ice cream and chocolate sauce. 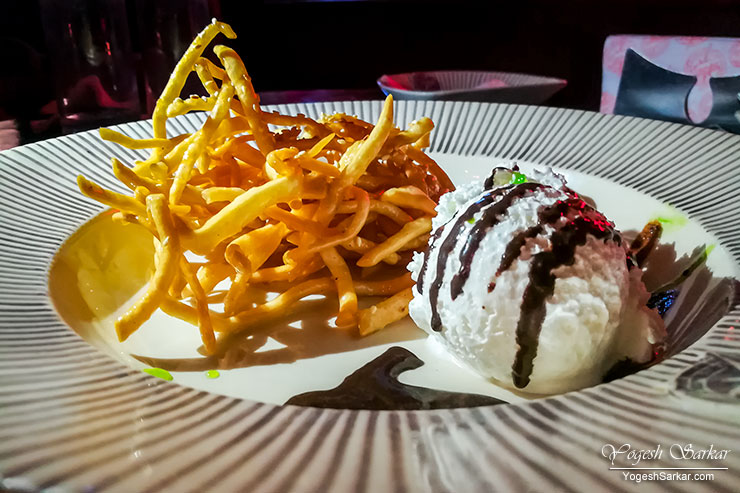 The noodles sort of tasted like jalebis, but different. And the serving of ice cream made it a perfect dessert that we could eat at a slow pace and really relish.

The service was a little on the slower side. However, courtesy and the fact that they agree to serve veg burger with black bun, more than made up for it.

The bill for Jammu’s Kaladi, Off American V.C.B and Darsaan, came out to be Rs. 1,330 and was served in this nice little container. 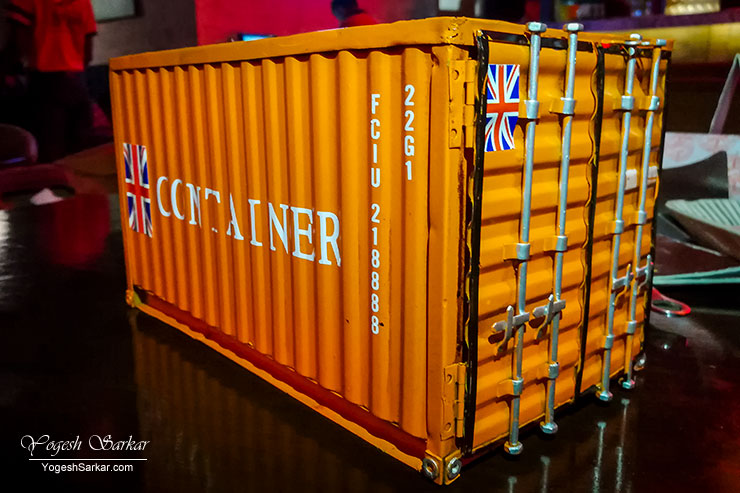 Going to Tourist after a bad experience at Bunta Bar proved to be the right move, since it not only helped turn the evening around, but we also ended up not only relishing the food and enjoying the ambiance but also listening to good music being played by the DJ at Tourist.