The Diwali is finally over and it is the day after Diwali. Assessing the situation over the past few days and even on the night of Diwali, it seems like the Supreme Court ban on the sale of cracker has done its thing.

Even though those who wished to burst crackers, went ahead and did that last night and it raised Delhi’s pollution level exponentially. 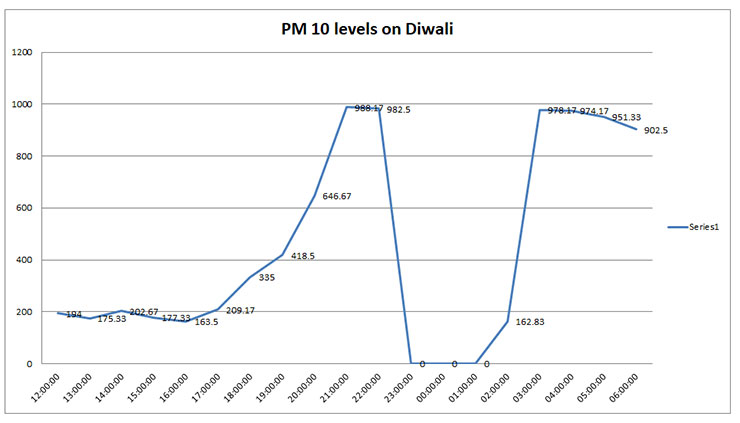 The above data has been sourced from publicly available data on CPCB, which comes under the Central Government (Ministry of Environment, Forest & Climate Change.)

Yet, the situation was better than earlier years and the morning although stifling, was still breathable.

However, this is only part of the story. The real benefit of cracker sale ban has been in the days leading up to Diwali when cracker sound was fairly rare. With most of the people keeping their stock under lock till Diwali.

This made Delhi breathable the entire week and allowed enough time for my medications to help recover my lungs from the last instance of Asthma attack.

Add to that, even last night’s pollution was comparatively less than earlier years with only a few households in our lane bursting crackers (they have been biggest and loudest offenders in earlier years as well, so I expected nothing less.) However, other colonies weren’t as fortunate, with distant sound of crackers being louder and more regular than the ones being burst around our house.

Yet the pollution was so severe, that I along with my family were forced to confine ourselves to a single room with the doors and windows locked and my Philips Air Purifier at full blast.

Thankfully, it saved the day and we didn’t even smell the burning of crackers, let alone smoke in our room. Though rest of the house stank with the smell of crackers and felt stifling at best.

I am thankful to the Supreme Court for coming out with this decision and I sincerely hope, they make the cracker sale ban permanent to ensure those who have to burst crackers, have to go through hoops to procure them i.e. lessening the chance of people bursting crackers at just about any occasion.

Of course seeing the destructive and suicidal tendency of populace at large, it seems highly unlikely I will be able to celebrate any Diwali in Delhi without keeping doors and windows firmly shut. A sad way to celebrate a festival of light and joy, thanks to the inconsiderate attitude of the others…