I do not like to begin my reviews or blogposts with a negative tone, yet, this is what I must do with the review of Soda Bottle Opener Wala in Cyber Hub Gurgaon. Because a restaurant is supposed to make its patrons feel welcomed and valued. To an extent this was true of our experience at Soda Bottle Opener Wala and there were plenty of welcoming smiles and courtesies involved. However, underneath it all, we felt unwelcome!

I have seen Soda Bottle Opener Wala at Cyber Hub numerous times, each time as I recall now, there weren’t many customers inside. 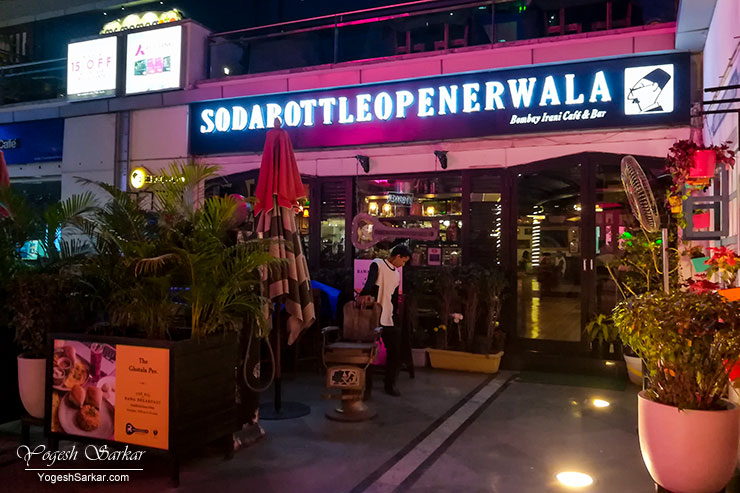 Since we were looking for a quiet place to have our dinner at and neither of us had visited Soda Bottle Opener Wala earlier, we decided to try it out.

Stepping inside, we liked the quirky ambiance, which had a lot of individuality and felt something you would associate with Irani and Parsi Cafes. 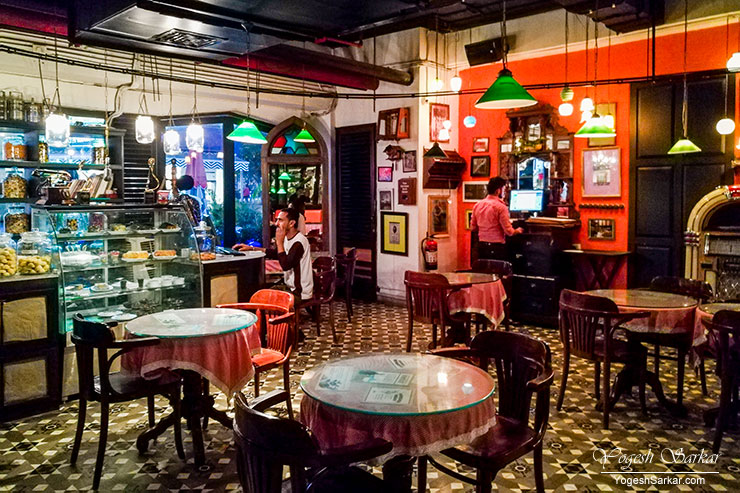 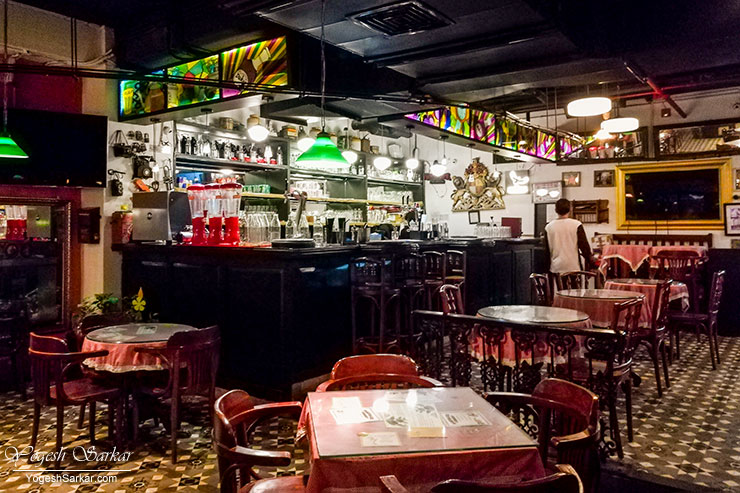 A couple of tables were occupied when we arrived and admittedly, we were late. They take their last order at 11:30 pm and we had arrived there around 11:15 pm.

After selecting a table we began going through our menu, which had quite a few interesting items and decided to order Aloo Aunty’s Vegetable Cutlet, Parsi Vegetable Kari with Rice and Kachumbar Salad, Raspberry Soda and Khade Chamach ki Chai (tea with half a glass of sugar!)

RD had ordered khade chamach ki chai, because there was a challenge listed next to it, stating if you finish it off, you don’t have to pay for it. And she really wanted to give it a try.

First, the Raspberry Soda and Aalo Aunty’s Cutlets were served and both looked delectable! 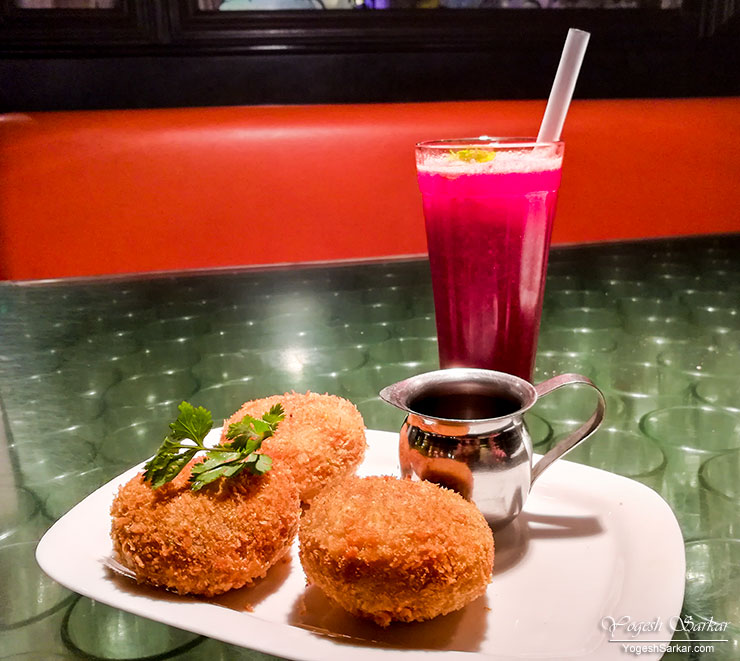 The Raspberry Soda was low on sugar and high on raspberries and was really delicious.

The vegetable cutlets were extra crisp and had mixed vegetables in them, and tasted quite good, though a little salty.

Soon the tea was served as well, with half a glass full of sugar! 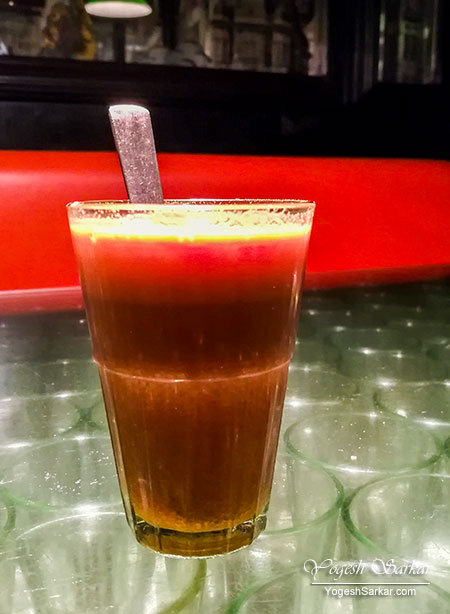 RD somehow managed to finish off the tea, I have no clue how she did that, but she did! There was a sign of triumph on her face when she did that :D.

As we opened the main course lunch box, the waiter appeared to ask us, whether we wished to order something else, I said no, and then he wanted to know if he could bring the bill!

He could see we had not even begun eating our main course, and thinking of bringing bill at that juncture was plain rude.

I asked him to bring it later and we started with the main course. 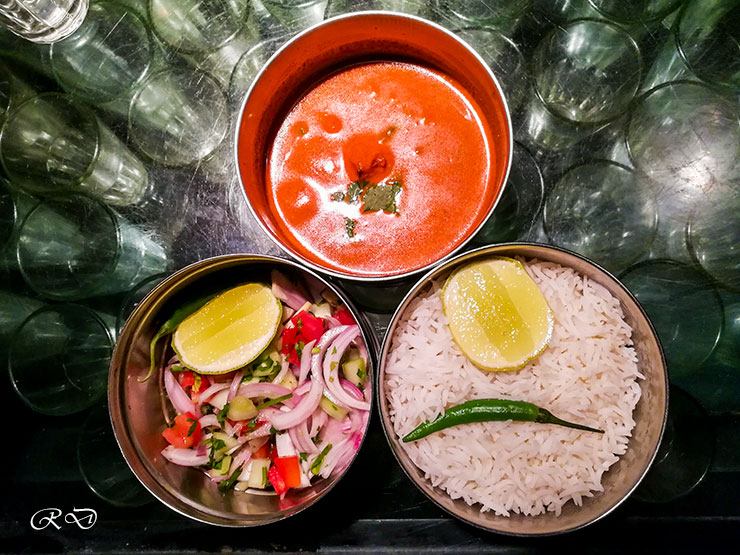 Parsi Vegetable Kari and Rice looked good, though a little low on quantity.

RD did the plattering and a single plate was enough to serve everything in the tiffin box. Though quantity was a little small, we hoped, the taste would more than makeup for it. 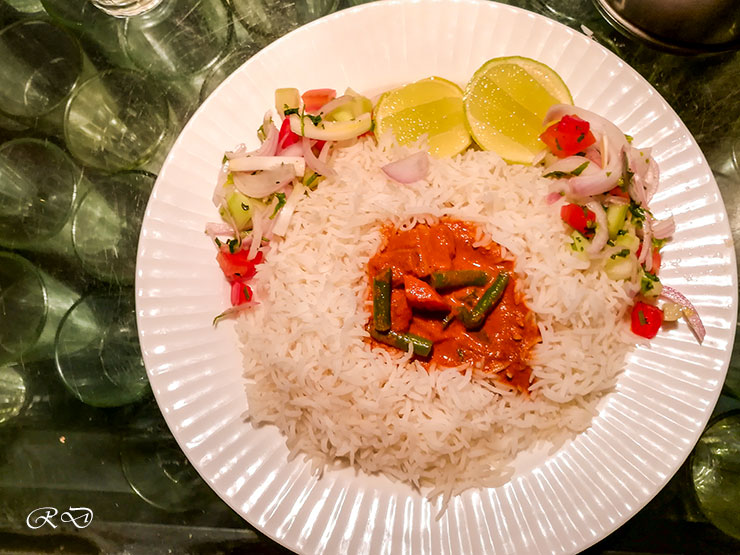 Tastewise, it was completely bland!

Sure there were fried potatoes and other vegetables in the curry to lend it a unique style, but taste wise, it was a complete and utter disappointment. Squeezing both the lime pieces added some flavor, but not much.

Soon, the waiter was once again at our table, asking if we wanted him to bring the bill. At this juncture, we asked him to do that and while we were having our food, we were served our bill by Soda Bottle Opener Wala and then just as we finished the main course, he appeared with the card machine.

Of course, he didn’t look at the finished glass of tea which was part of the challenge and billed us for it. After we pointed that out to him, he expressed his inability to do anything.

Though he did offer to bring another glass of tea.

At this point though, we were in a greater hurry to leave SodaBottleOpenerWala than their staff, which was busy with their closing and cleaning activity while we were having our dinner and I guess apart from shouting and telling us to move out, couldn’t have made us feel more unwelcome and unwanted.

Total bill for the dinner came out to be Rs. 964, including a 10% service charge, which at least at this point, felt extremely unnecessary.

We were out of the restaurant by 11:50 pm. Had they shown a little less inclination for us to leave as soon as we ordered the food, we might have spent 5 or 10 minutes more at the restaurant. However, we would have left with a good impression of Soda Bottle Opener Wala and that might have made up for the main course we didn’t like.

The 20% discount coupon that comes with each meal for the next meal at their outlets was tossed in garbage as soon as I reached home. Because even though it was valid for a month, I doubt it would be used, even if it was valid for a decade!