Fukrey was an amazing and witty movie, that had the audience laughing throughout. Fukrey Return i.e. Fukrey Part -2 thus had big shoes to fill and considering the almost packed movie theater, the anticipation was running high with everyone waiting impatiently for the start of the movie (PVR Logix, as usual, started it 20 mins late).

Since Fukrey Returns is in continuation of Fukrey i.e. it is the second part of the movie, rather than just a sequel. It started off with retelling the story of Fukrey in a comic manner, in order to help jog the memory of the audience. This I felt was a nice touch, though it is hardly possible for anyone to forget Fukrey. 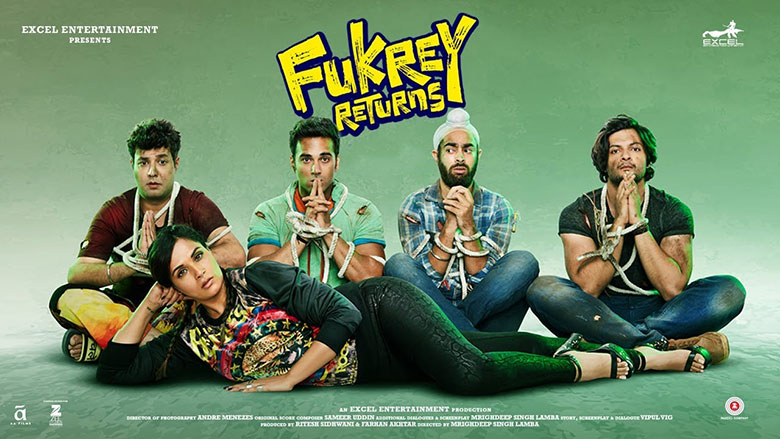 The opening sequence wherein Hunny gets bitten by a snake on his butt (none other than Bholi, Choocha’s eternal love is the nagin) and then the good friend that Choocha is, sucks the poison out. The entire sequence is hilarious to say the least, and sets the tone for the rest of the movie.

The cast of Fukrey Returns is the same as Fukrey and Bholi manage to come out of the prison with the help of the minister, to cause trouble for our four protagonists, who are still the same, even though a year has passed and they are now college going, comparatively richer lads.

Hunny and Lali still make money from Choocha’s talent of dreaming lottery numbers by playing the underground lottery syndicate and doubling the money of people in a single day, who invest with them and they in turn use that money to play the lottery and return a 10 fold profit.

Laying low, and attracting little attention to their modus operandi. Until of course, Bholi shows up. And then, all hell breaks loose.

Even though Fukrey Returns is a fantastic movie, there seems to be something missing in it. Maybe it is due to the fact that even though the storyline is different, it is predictable now and maybe because, now we compare it with Fukrey in our minds and thus expect something even more, which just isn’t there.

In the end, Fukrey Returns doesn’t disappoint and at the same time, doesn’t deliver anything new. Yet, it is still a must watch for anyone who loved Fukrey.