On Saturday, Mansi and I decided to visit Diggin at Chanakyapuri for a late lunch.

Finding this place is a little difficult, even though it is clearly marked on Google Maps. Because when Google map tells you to take the street on which Santushti Shopping Complex is located, you’re greeted by a gate for Air Force Station! Turns out, the shopping complex and Diggin are located inside the air force station and not visible from the road. And it is only after you enter the station that you see the shopping complex on the right.

The entire Santushti Shopping Complex is very pretty and the Diggin in no different. 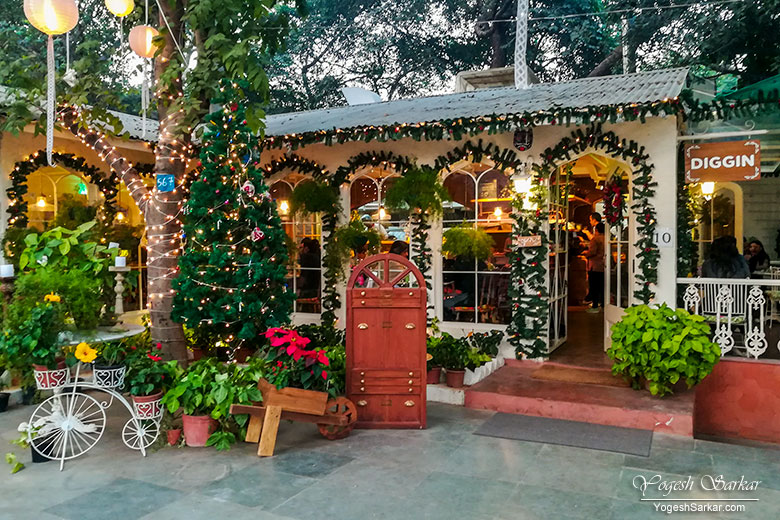 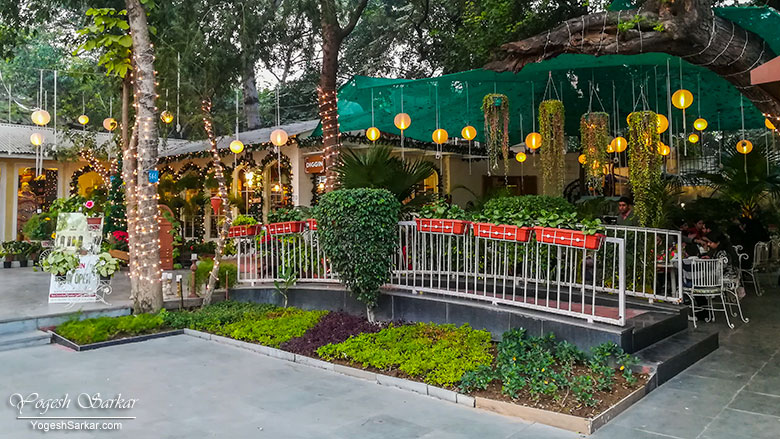 Even though we had reached Diggin at 4:30 pm, we had to wait nearly half an hour for the table. However, if you’re as clever as a couple who walked in when the manager was inside, stood waiting and occupied the first table that got free, you wouldn’t have to wait at all. Of course, the staff doesn’t seem to mind that attitude either!

Also, there are no toilets at this restaurant. So you have to use the one in the shopping complex, which is dirty, to say the least.

After waiting for half an hour, we finally got our tables. Which was dirty and cleaned a couple of minutes later by the waitress, who didn’t feel it necessary to clean cheese on the chair or replenish the depleted cutlery on the table.

A few minutes later, when we asked for the menu, the waitress finally bought a couple of them, though she didn’t feel it necessary to serve us any water. In fact, we had to ask for water twice, after our meals, to finally get a glass of water, that too after waiting 10 minutes for it!

But, it was pretty inside as well. 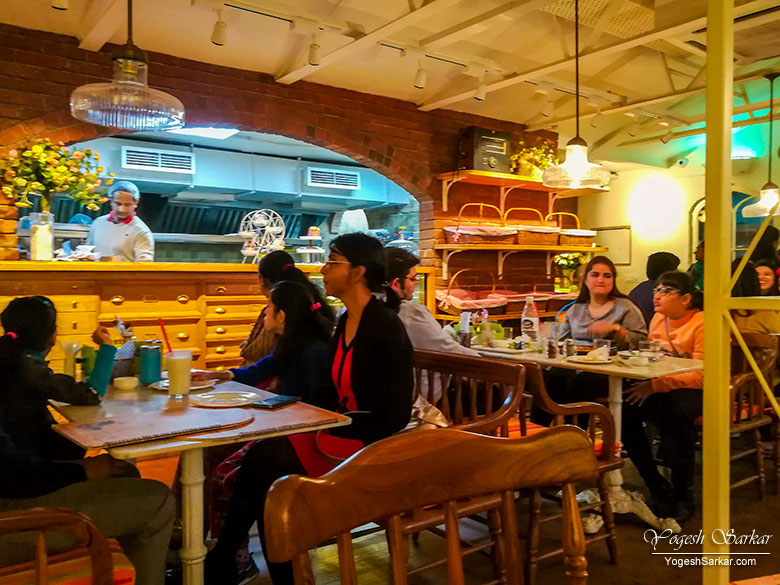 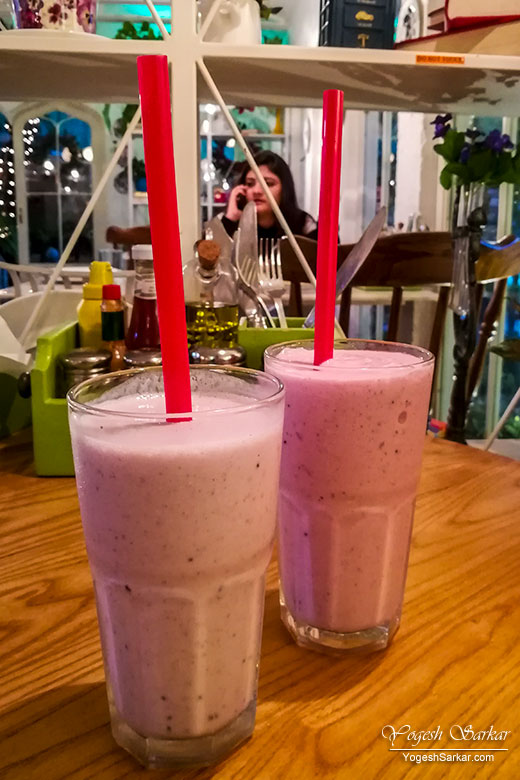 Then began our wait for the food. We finished our smoothies and there was no sign of food. The staff though was constantly moving around, arguing amongst themselves and operating in a very haphazard manner.

After 45 minutes, we saw the manager and called him and told him, we had been waiting for food for past 45 minutes. He went to inquire at the kitchen and we could see, chefs had completely ignored a couple of order slips and it was only after the manager reminded them of our order, that they started preparing!

10 minutes later we were served tomato bruschetta made with cold hard bread and vegetables taken straight out of the fridge. It neither looked appetizing nor was tasty. 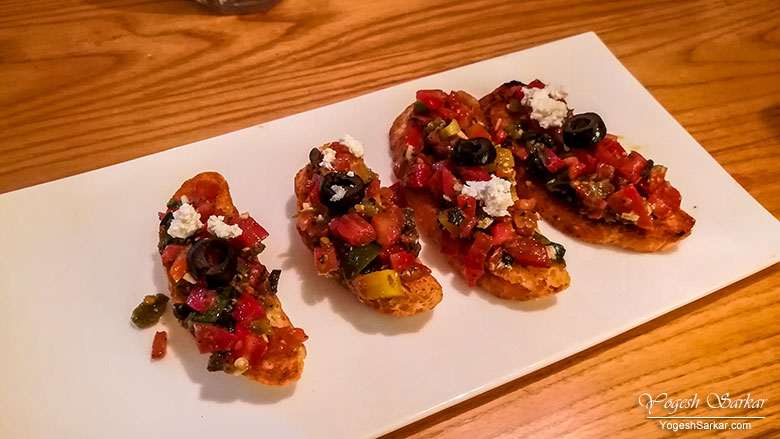 15 minutes later, we were served mushroom risotto. It didn’t look appetizing and to top it all, there was no spoon to eat it with. We asked the waitress to bring us a couple of spoons, but while we were doing that, another waiter felt it right to butt in and say something to her, even though he could clearly see, she was talking to customers! 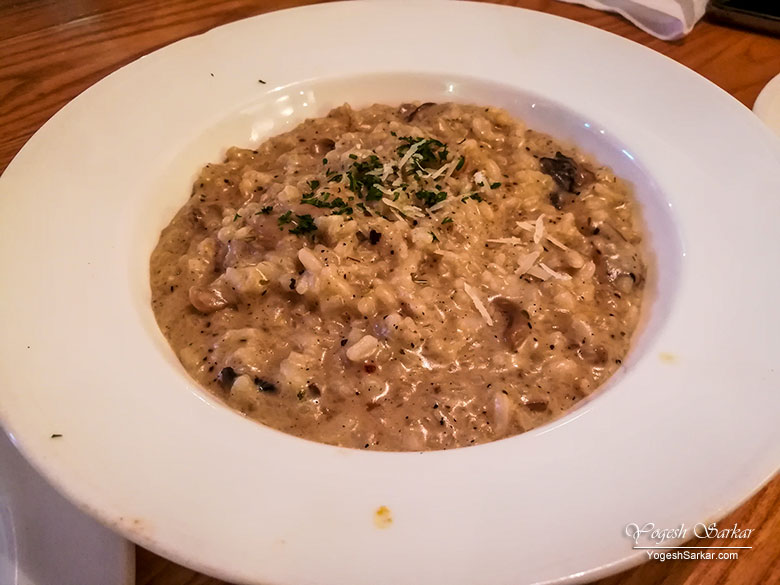 A few minutes later, we finally had a couple of spoons (no serving spoon was brought by her) to eat risotto with. It had enough salt and black pepper to qualify for a Punjabi Pulao, though it neither had the taste of pulao nor the creaminess of a risotto!

Thankfully there was a bottle of olive oil on the table, which made it possible for us to finish it.

Then we called the waitress over for water, and while we were telling her to get us a couple of glasses of water, the waiter decided to butt in again and told her to serve customers outdoors. Even though we had told her to get water, she decided to head outdoor, without serving us and we had to wait for another few minutes to call another waitress, who eventually served us water!

By now, we have had enough. We asked the waitress to bring our bill and when it was brought to us, with 5% service charge, we asked her to call her manager.

There was absolutely no way, we were going to pay a service charge for this pathetic and insulting service by the staff of Diggin. And we conveyed the same to the manager. He offered his apology to us and offered to bring another dish or dessert to us, free of charge. However, no free dish or free desert was going to making up for a spoilt evening, so we asked him to remove the service charge and we would pay the bill.

5 minutes later he came back, after having added a 10% discount and removed service charge as well. However, having wasted more than a couple of hours at the Diggin, this was of little solace to us and paying Rs. 1,052 for this pathetic experience seemed like a daylight robbery.

We paid our bill and left, vowing never to return to Diggin. Diggin it seems is only good for the Instagram stories and pics, and for food, it is better to head elsewhere and not waste your time and energy here!