I had first come across Darzi Bar and Kitchen last year when it didn’t have a bar license. Even though we wanted to check it out even then, we ended up going elsewhere.

Fast forward to last night and RD and I made up our mind to visit Darzi Bar and Kitchen, located in the outer circle of Connaught Place (Block H, right above Mother India.)

Since it is located on the first floor, the entry, doesn’t really looks all that impressive. 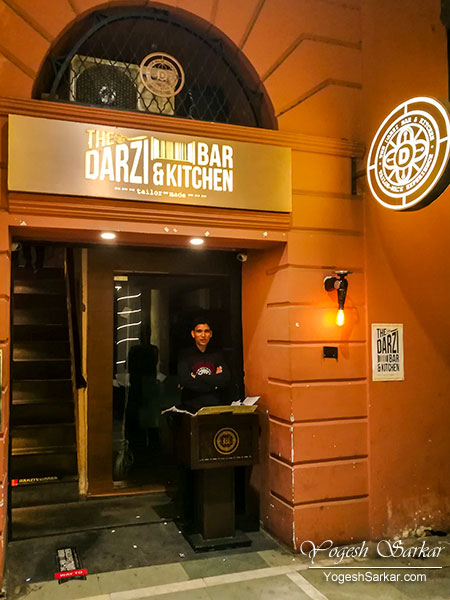 However, enter inside and it is beautifully decorated with a Darzi (Tailor) theme. 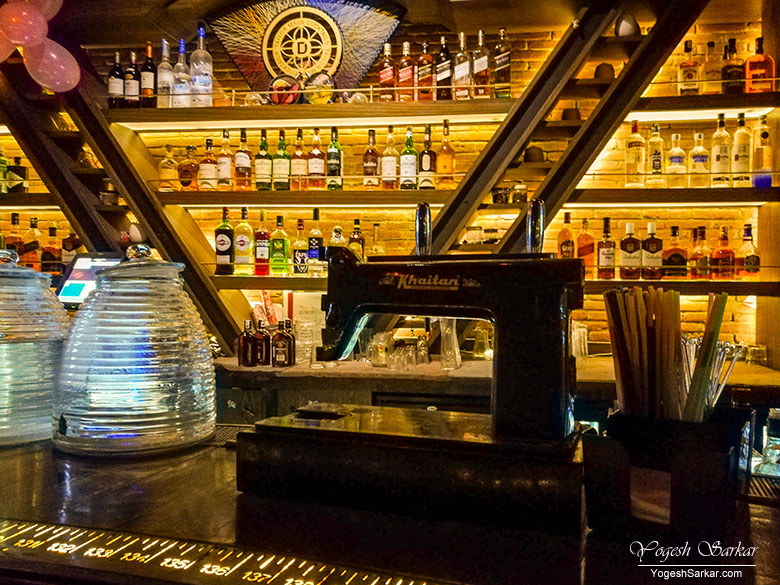 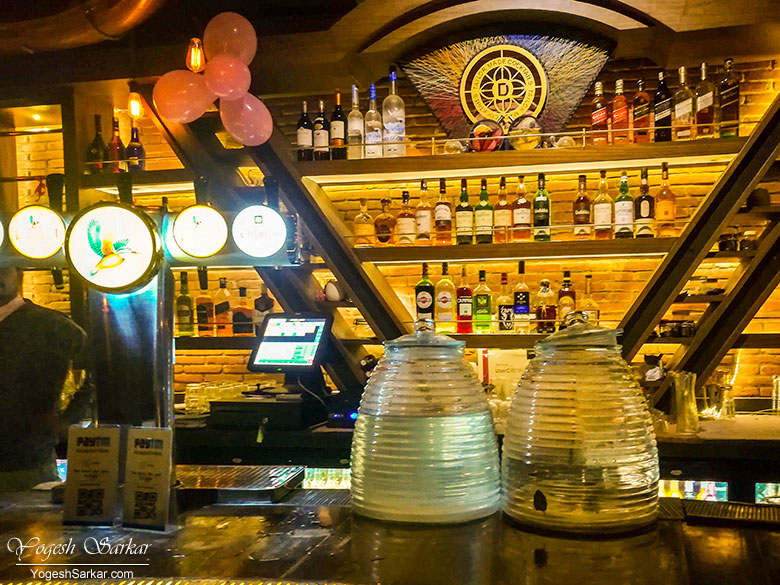 Since yesterday was Wednesday, unknown to us, it was karaoke night at the Darzi. The good thing was, the Karaoke songs were mostly Hindi, a break from the usual karaoke nights at most bars, where the songs are in English. Bad thing was, an office party was in full swing with a couple of terrible, terrible singers to boot. 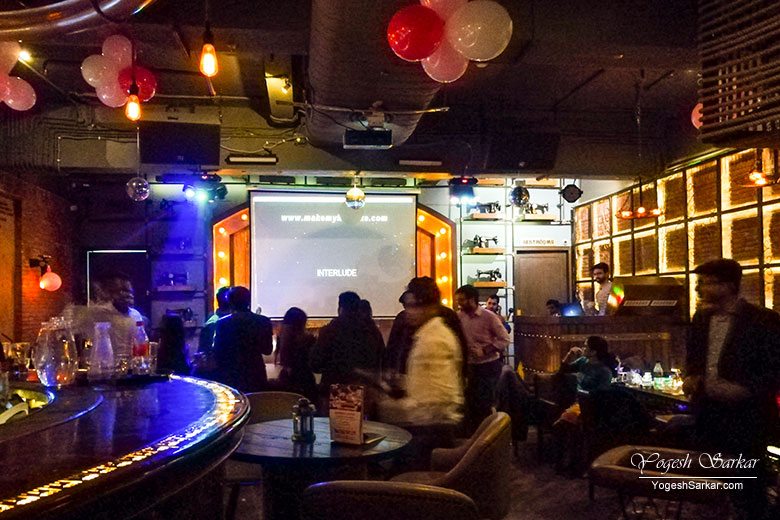 The thing I didn’t like about Darzi Bar and Kitchen was the seating arrangement. Around 3-4 tables were placed right next to the bar and by that I mean, these tables on one side were right up against the bar table. And we were given one of these tables and others were unfortunately either occupied or reserved. It is neither comfortable nor fun to sit right next to the bar and that was a major downer.

The menu of the Darzi Bar and Kitchen was quite interesting with quite a few dishes having quintessential Delhi and tailor slangs in their name.

The service of the restaurant was quick and courteous. The only sad point was, almost the whole of the order was brought together! So our table was full of 3 dishes and a couple of drinks and we were left wondering, which one we should eat while hot and which one we should let get cold!

This is despite asking the waiter to bring the pizza later on, though to be fair to him, we told him that after he brought the maggi and mushrooms one after the another and by then, the pizza was ready.

When we were ordering ISBT Makhani Maggi, even though we were quite interested to try it out. In the back of my mind was the fear that it wouldn’t really taste good. Since I rarely if ever like maggi with added things. And usually, such experiments are utter failures!

However, ISBT Maggi not only looked delectable, it was delicious! 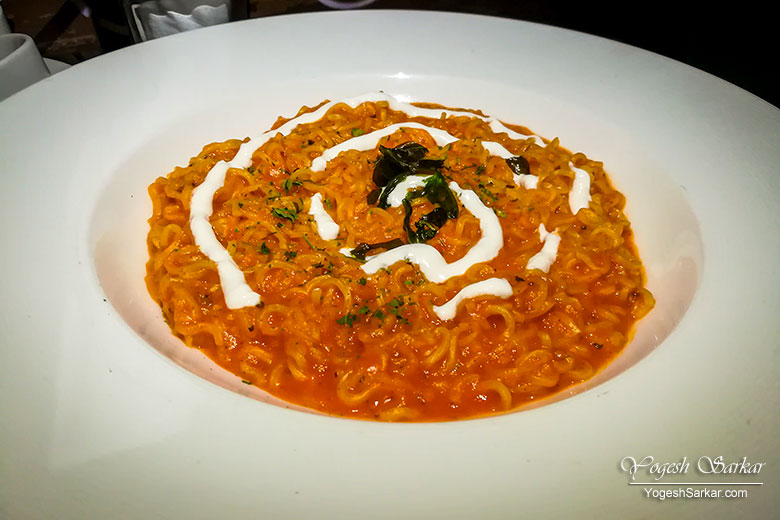 It not only still had the flavor of maggi, it also had the rich and creamy feel of dal makhani (without the dal of course) with just the right amount of spices. To say it was just about perfect, wouldn’t be incorrect. In fact, it made me think, that their dal makhani must be fantastic as well!

The Cheesy Spinach Mushroom (button mushrooms stuffed with creamy garlic spinach, fried with grated parmesan and panko crumb) was just about alright. It wasn’t bad or anything, it just wasn’t impressive enough. 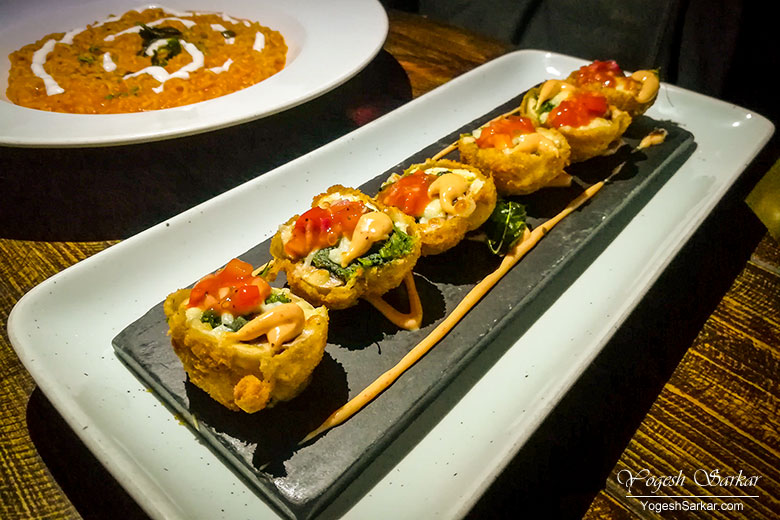 The Mushroom Rogan Josh Curry Naan Pizza on the other hand was absolutely delicious!

It had a great flavor with just about right the amount of cheese and while the spiced mushrooms tasted superb and the amount of them on the pizza felt a little less due to it. The spicy tomatoes in the middle were amazing! Though just like most thin crust pizzas, the corners were hard. 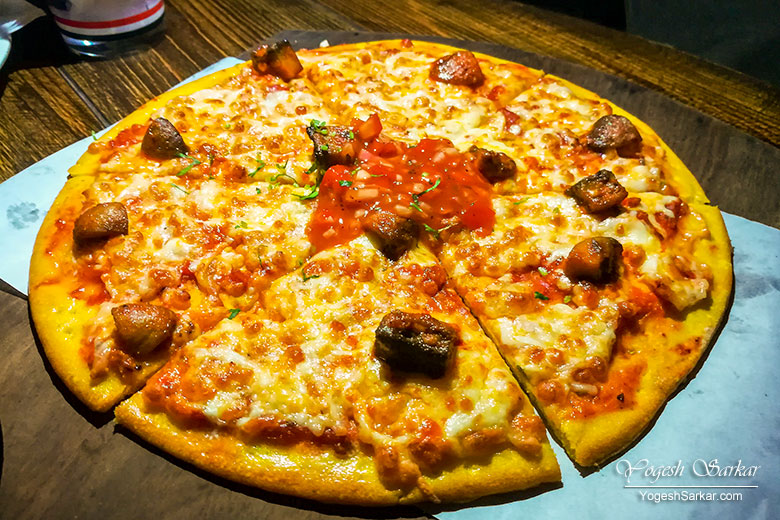 Pomme D’ More was delicious as well, though a little too sweet for my taste. 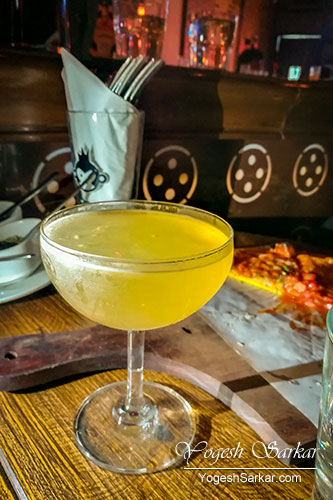 The cost and final words

Even though the ambiance was good, service was quick and fast, Bollywood karaoke a welcome surprise. What impressed us most was the food and that too in decent quantity!

At most of the places, portions are small and the fusion of Indian with Western Cuisine leaving a lot to be desired. Not at Darzi Bar and Kitchen and all this for Rs. 1,339 (including 10% service charge).

Leading to a wonderful evening and at the end of it all, tempted us to order even more. Though for the sake of our already full stomachs, we decided to avoid doing that!