Since I had no clue how much data I was using with Excitel (they don’t show aggregated data usage, just session data), I opted for the Rs. 1,299 plan with 350 GB of FUP. I was also supposed to get 1,000GB free with it, so I hoped, this would be enough to cover my needs. Especially since my desktop showed data usage of around 150 GB in the last 30 days (primary data user, second is Chromecast and mobile phones.) 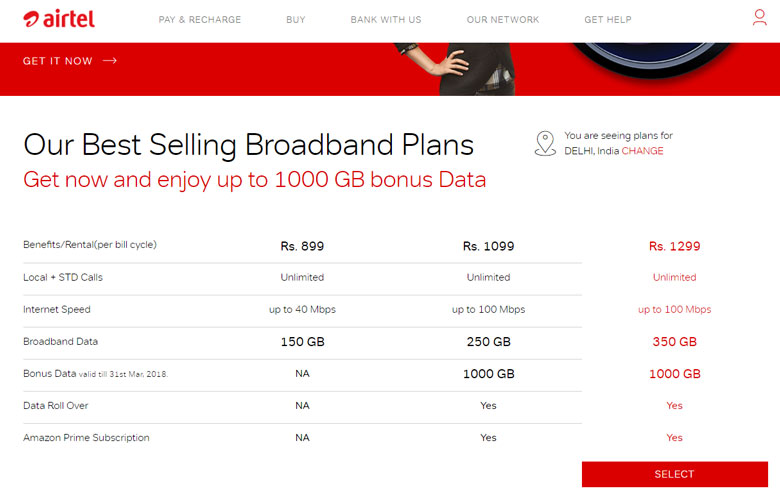 I raised a connection request on Airtel’s website at night, next day their representative came to collect the documents and I made the online payment of Rs. 500 for the installation.

On the next day, Airtel’s technicians came, they wired my home and installed a DLink VDSL DSL-224 Wifi router and modem and I was online by late in the afternoon! 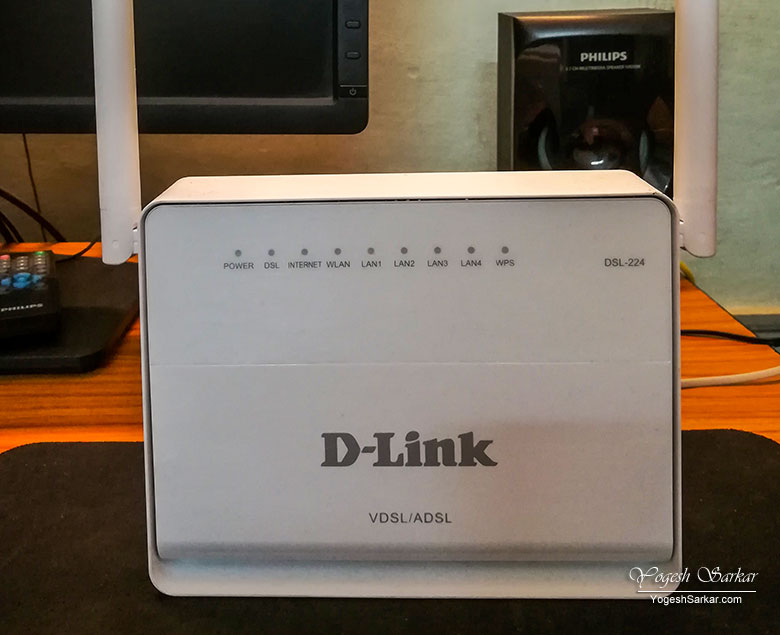 Installation was done cleanly and professionally (at least in our home) and I was happy to be online, though saddened by the fact that Airtel could only deliver 24 Mbps to my home (more on that later.)

Quality of Airtel Network is quite good. And running speedtests only confirmed that.

For the Fast.com Speedtest (Netflix Peering test), the connection performed as fast as it was supposed to go. 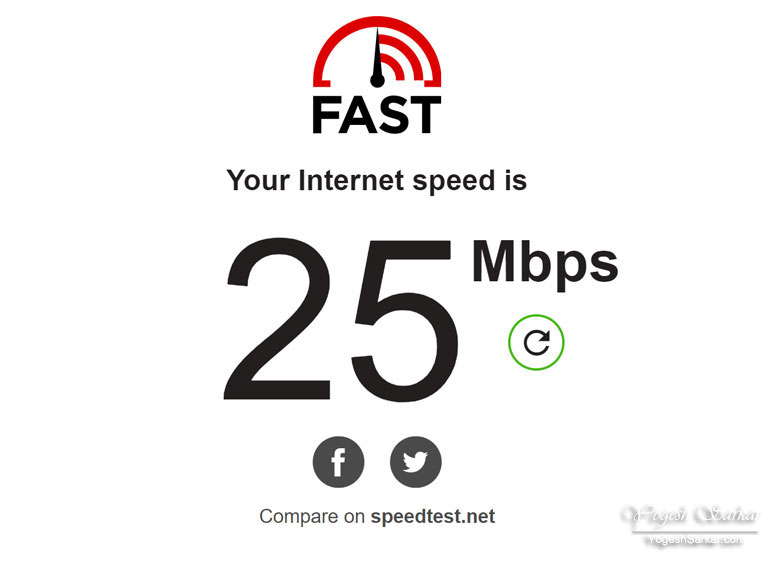 Testing it with Delhi server of Speedtest.net revealed a similar story.

However, when I tested it with the Singapore server, it proved to be rather disappointing with an average download speed of just 4.89 Mbps. 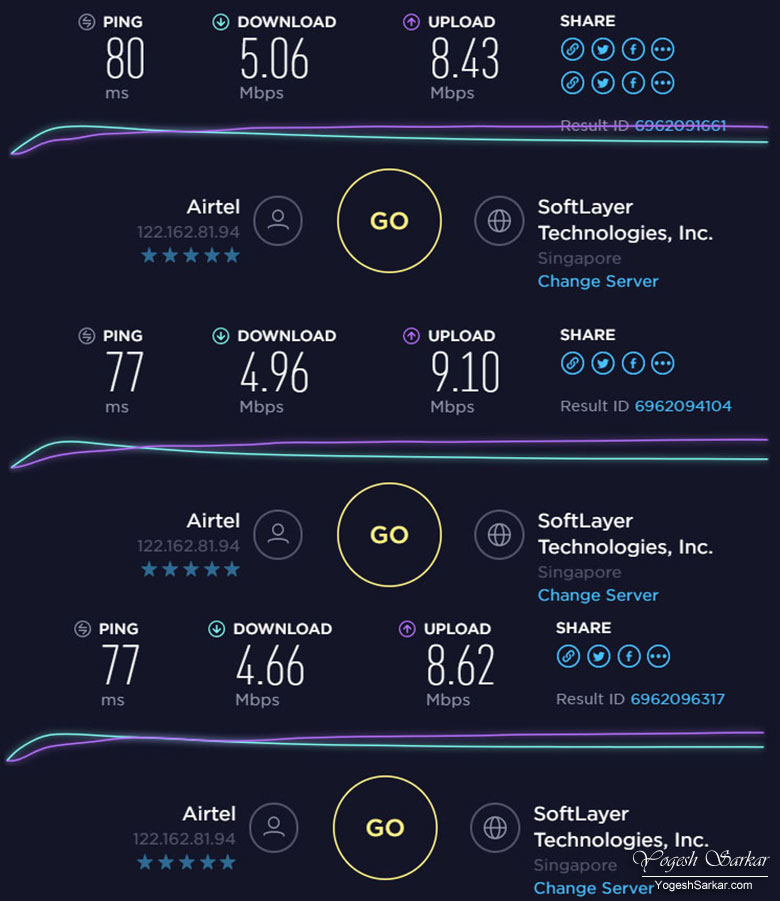 However, it proved to be an anomaly, since when I tested it with London server, I got an average download speed of 22 Mbps. 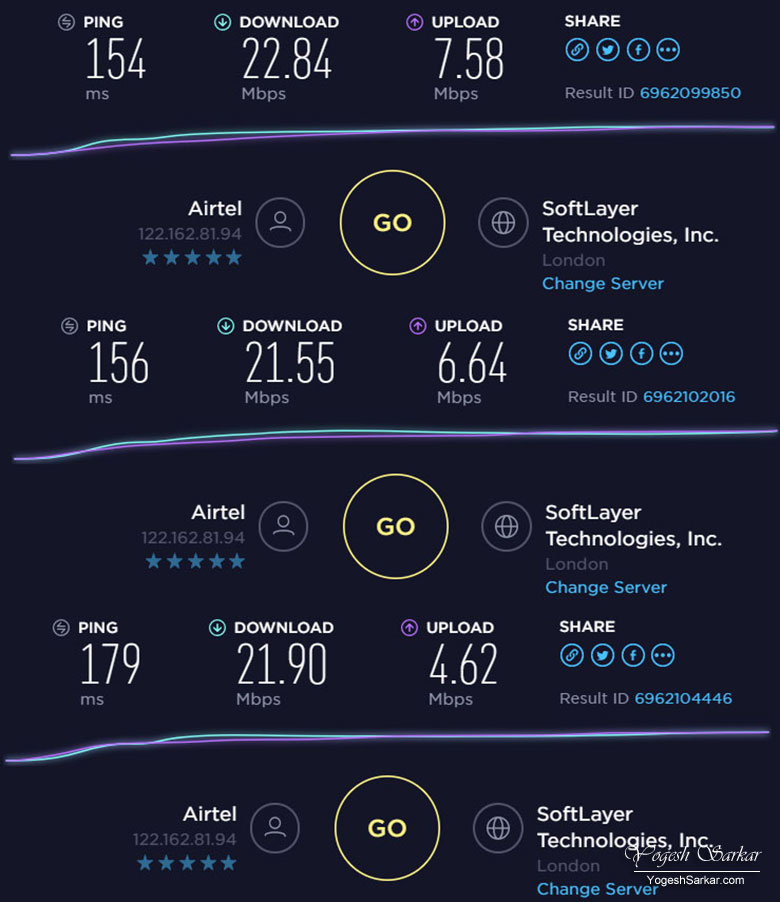 In case of Washington server, I got an average download speed of 22.2 Mbps! 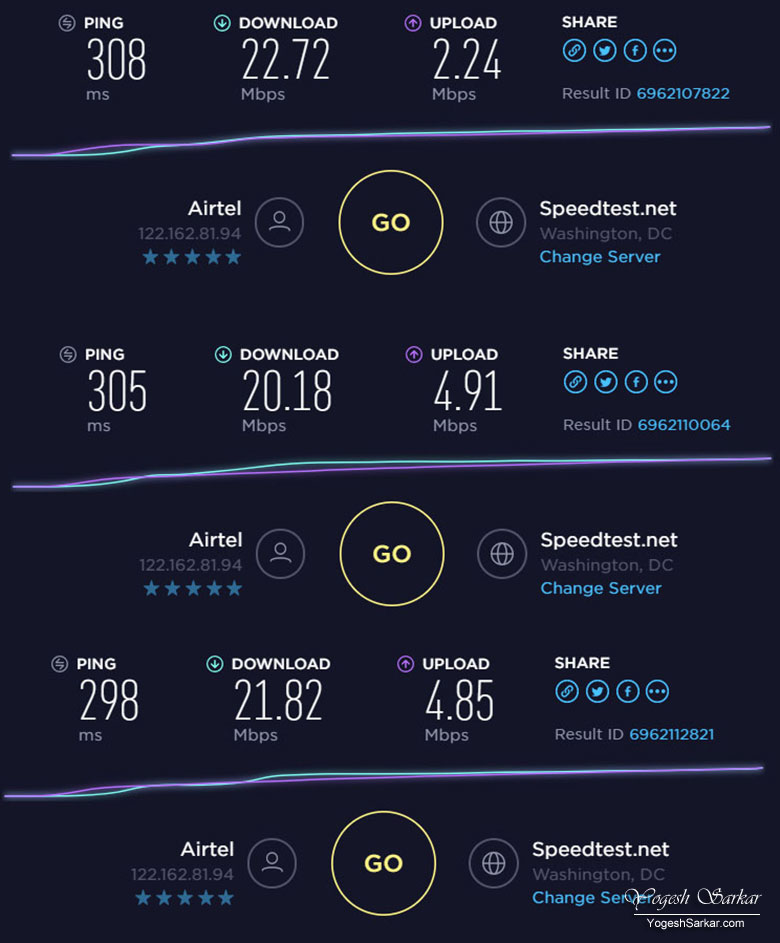 I did not test the torrent download speed. However, I doubt I would have had any issue downloading at the maximum available speed, considering the above test results.

Of course, I was very impressed with these results, since it pointed to a quality network that ensured similar global bandwidth as peering within India and should be excellent for anyone gaming or streaming online.

When it came to streaming Amazon Prime Videos, it was smooth sailing. In fact, the switch to 1080p stream was near instantaneous. Something that never used to happen with Excitel.

However, I was only getting 24 Mbps bandwidth from Airtel and that proved to be inadequate for streaming on two devices simultaneously. And the video constantly got downgraded to 720p due to it. I had to either keep watching it that way or switch off one of the streams, in order watch full HD content. Which at least in my home wasn’t really feasible.

This meant I was paying more than twice the amount for half the speed with limited data usage! And that speed wasn’t adequate for streaming Amazon Prime Videos to a couple of devices.

Add to that, Airtel not only counts download towards your FUP usage, but also uploads! And I supposedly used nearly 37 GB of data in 48 hours and that too when we were streaming less than what we did in case of Excitel, hadn’t downloaded any torrents and the streams were getting throttled due to bandwidth limitations!

Then there were frequent disconnections. Not as bad as what I was facing with Excitel, but still there. 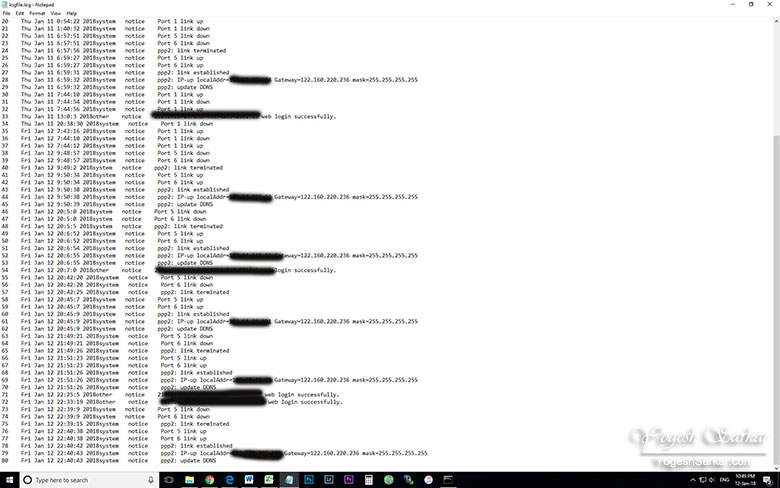 Add to that, the DLink VDSL router had remote administration enabled with no option to switch it off, something I view as a security risk. Though I did change the password to a rather long and nondescript one during my time with Airtel ;). 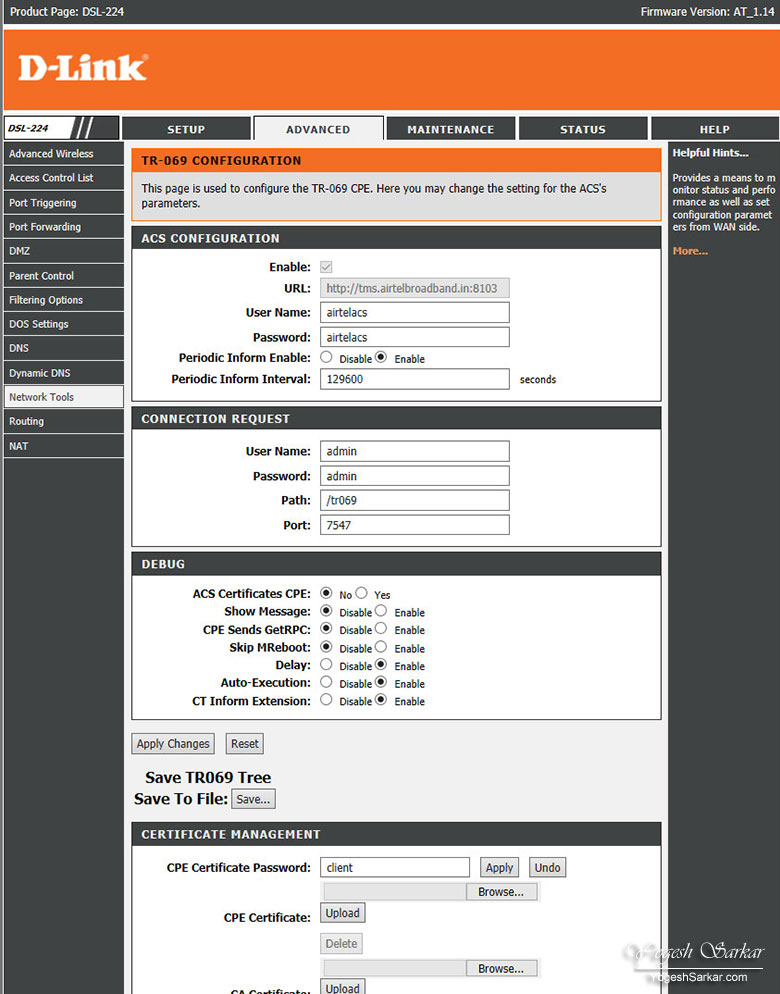 And even though the line was supposedly capable of delivering 45 Mbps, I was only getting 24 Mbps due to my distance from the Airtel node. Though interestingly enough, the last retention call from Airtel offered to raise my speed to 40 Mbps, which their technician and other support and retention team members had said, wasn’t possible. 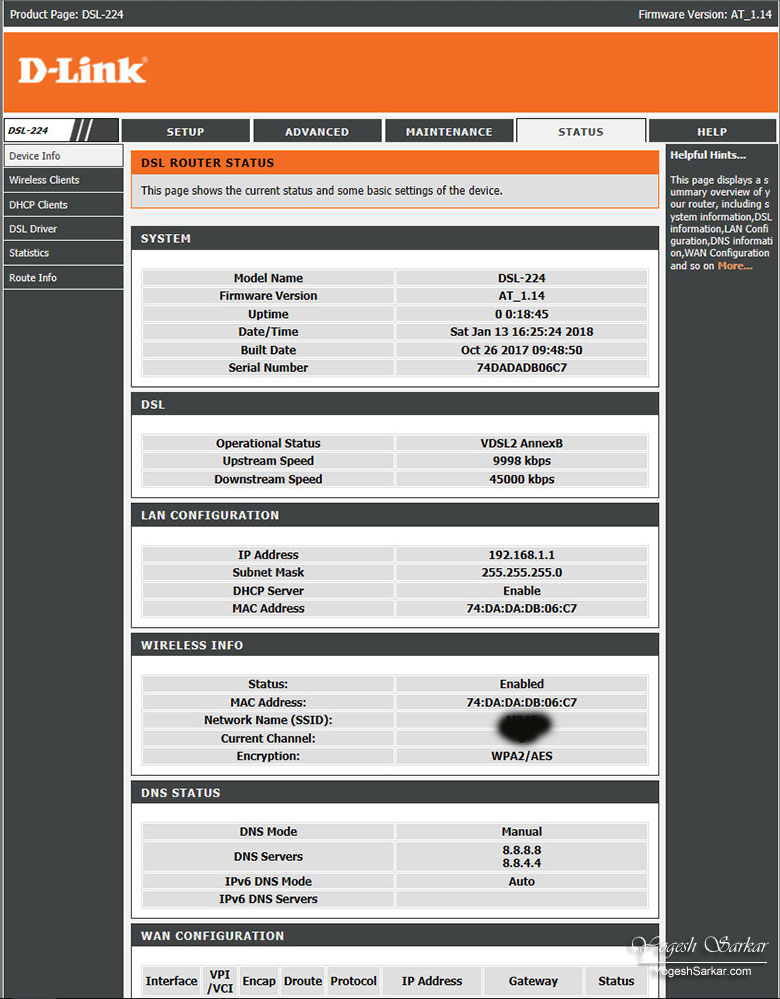 In the end, it just didn’t make sense for me to pay twice the amount for half the speed and limited data, which seemed to be getting used faster than I expected. And since we rely solely on our internet connection for entertainment (no cable or satellite TV), we knew there was no way, we could live with a connection which couldn’t even stream a couple of 1080p streams on a regular basis.

And I figured if I had to deal with frequent disconnections, I might as well do it by paying less amount and thus switched back to Excitel, which had offered me a test connection in the meanwhile to test out disconnection issue, which at least at that time, had been fixed.