Each time we talk about or eat Mediterranean and Italian Food, I have to hear Mansi’s praises of The Big Chill Cafe. Since I had never visited it, I wasn’t quite sure if she was singing praises because it was really good or just like that (:P). Last week, we visited The Big Chill Café in DLF Mall of India, in Sector 18, Noida and I got a chance to discover the truth behind all those praises! 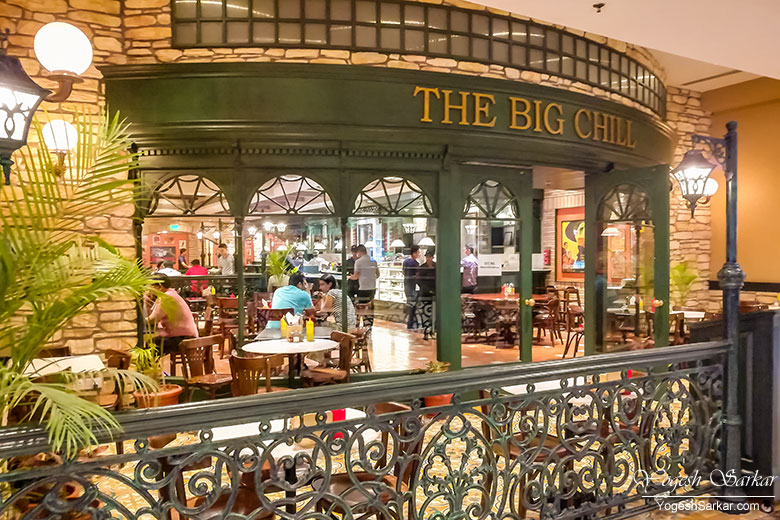 The Big Chill Cafe is spacious and busy and even on a weekday night, there were scores of patrons inside when we reached there for dinner. In fact, even at 11 pm, when I left, patrons were still coming in and were being welcomed with smiles by the café staff. 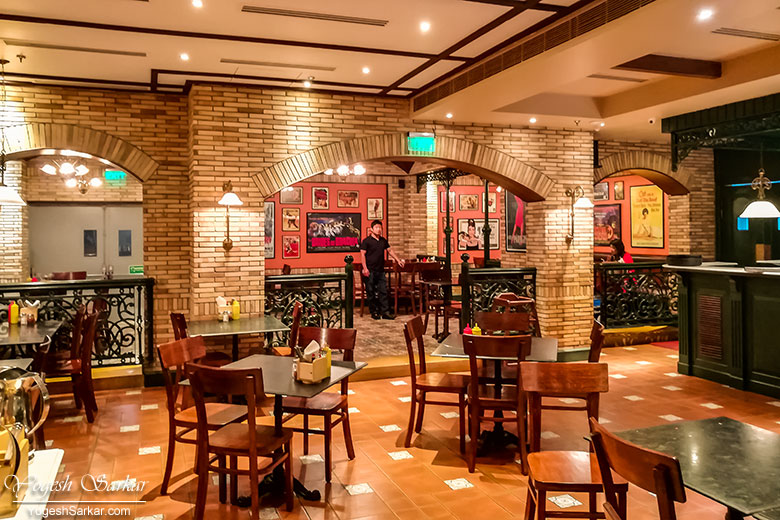 In fact, one thing that really stood out was the service. Always courteous, prompt and smiling. The only thing I didn’t like was the fact that they brought pasta and pizza rolls one after the other, even though we had initially requested them to bring the pizza rolls first and the pasta a little later.

Since we were quite hungry, I wasn’t sure about portion size and Mansi had been lavishing praises about The Big Chill. So we decided to order Pineapple Fizz, Lemon Soda, Fattoush, Cheese Garlic Bread, Brotchen Pizza Rolls (veg) and Spaghetti Aglio E Olio.

Drinks were served first, as per our request and they were delicious! 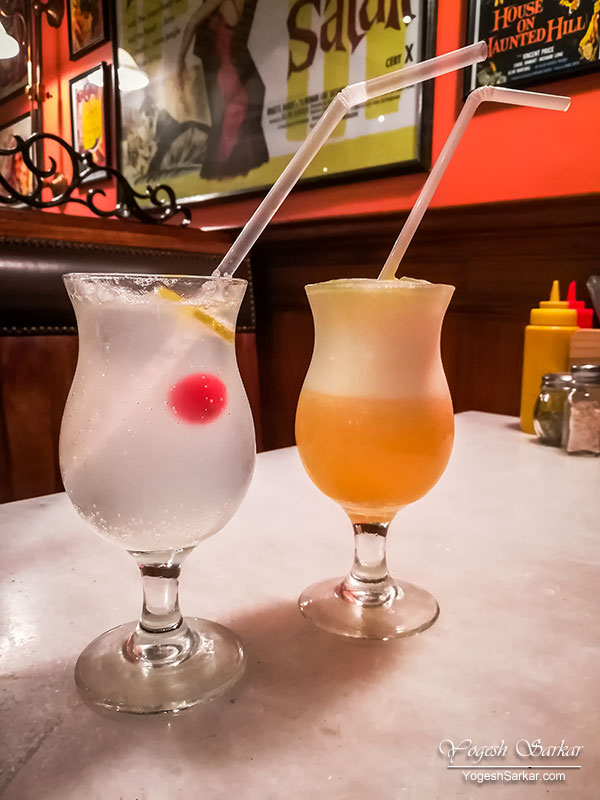 Lemon soda was done just right with the flavours of salt, sugar and lemon in harmony and neither overpowering the other.

Pineapple Fizz, on the other hand, was delicious as well, but there was no fizz in it. I guess Pineapple juice or something of that sort would have been a more appropriate name for it. In any case, we loved its taste as well.

Fattoush Salad was next and it was delicious as well with a good serving size. Though a little sour for my liking and made with normal bread, instead of pita. 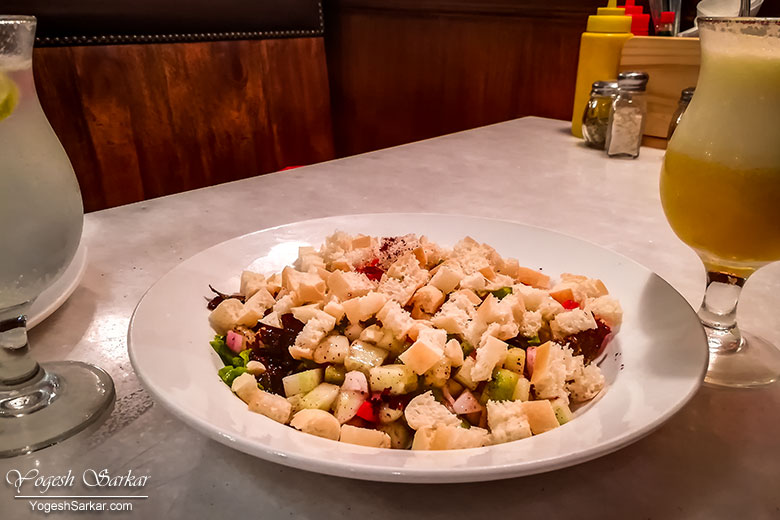 Garlic Cheese Bread was served next and it had a decent serving size as well with a lot of cheese. However, the bread was too thick and soft for my liking. I generally prefer crispy garlic bread. Flavor-wise, it was quite good. 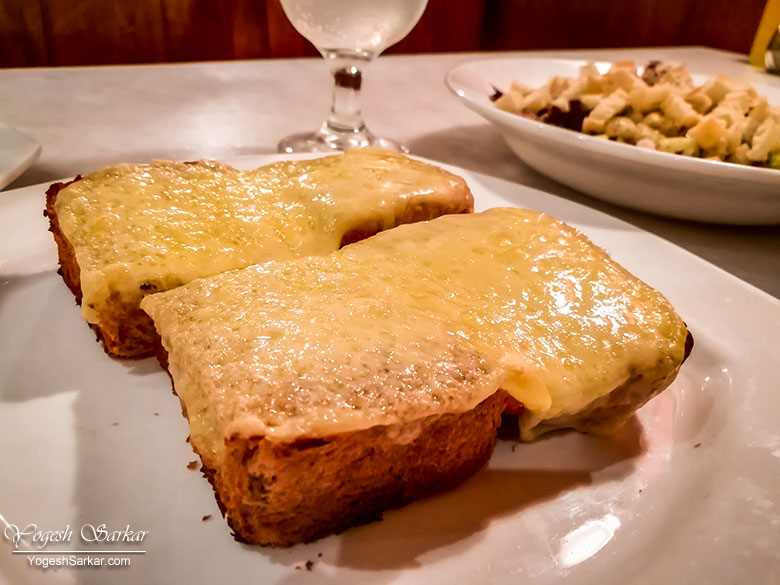 The Brotchen Pizza Rolls had a fairly large serving size as well, considering it was supposed to be a starter. In fact, the moment they were placed on our table, we had serious doubt on our ability to finish them off along with pasta. 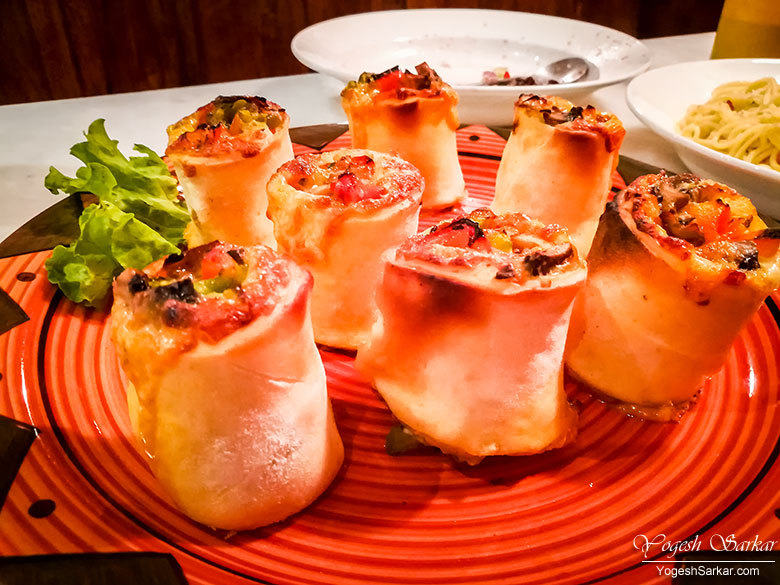 However, we manage to do that, since they were finger licking good. Even though they were a little bland and we had to put oregano and chilli flakes to make them spicy. But the thing we liked the most about the Brotchen Pizza Rolls was the fact that they were not only crispy on the outside, even the vegetables inside were crispy!

Neither of us had eaten Spaghetti Aglio E Olio earlier and hence we had decided to order it. It turned out to be a good choice, especially if you like the flavour of garlic mixed with olive oil. 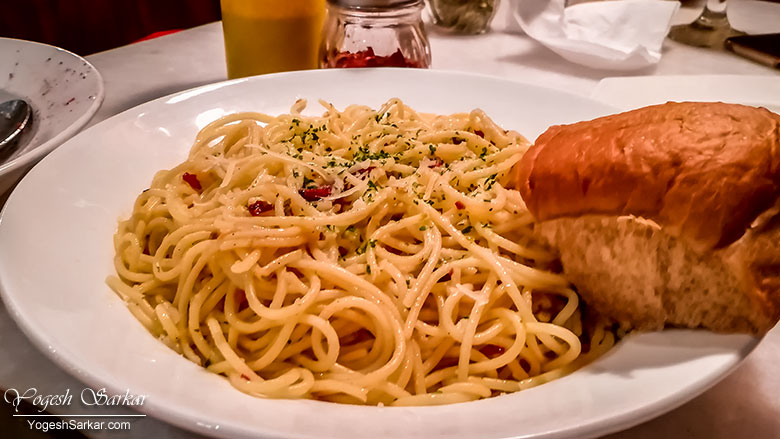 We ended up asking for extra parmesan cheese and sprinkled it over the pasta, which made it even more delicious. Though I felt it needed more olive oil, something Mansi disagreed with. The bread served along with the pasta was soft as well, something I didn’t quite like.

We had serious doubt we could finish the food that we ordered, in the hindsight, it would have been a good idea to get some of it packed, instead of finishing it all off. Because after eating so much food, I could barely breathe.

However, the food and the overall experience was so good, that it was worth walking around like a zombie, after overeating!

Our bill for the Pineapple Fizz, Lemon Soda, Fattoush, Cheese Garlic Bread, Brotchen Pizza Rolls (veg) and Spaghetti Aglio E Olio came out to be Rs. 2,163 (no service charge was levied.) And I can’t wait to revisit The Big Chill again and try out some of the other cuisines they serve.