Around The World in 80 Girls, wait what?

This was my reaction when I first came across this book on Kindle, while sitting in a coffee shop, browsing for a new book to read. After all, we have all heard about, “Around The World in 80 Days”, but 80 Girls?

That was halfway between preposterous and tempting.

So I did what anyone with Kindle Unlimited Subscription would do, I downloaded the book and started reading it. 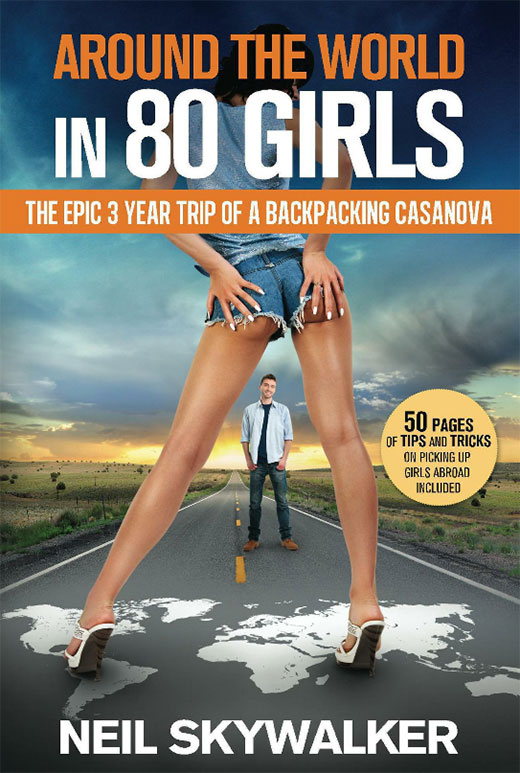 This is the story, of a 3 year long, around the world journey by a Dutchman, Neil Skywalker (pen name.)

A journey which initially starts with the aim of exploring the world and quickly turns into a pickup trip with an aim to capture as many flags (having sex with a girl from a new country represents a flag) as possible, while trying to get to the target of having sex with 80 girls during the course of the trip.

As you can probably guess, this isn’t a book for those who are easily offended by such antics.

Also, this isn’t a book for those who want to read it as a travelogue (I am not sure if anyone would) because even though there is plenty of travel information in it along with travel tips (especially budget travel) in the end, the goal or rather the obsession of the trip is to sleep with as many different women as possible.

So much so, that you see him drift off from travel, sense of exploration and even fun, in hopes of scoring with a girl! And that I guess is the really sad aspect of this book.

Otherwise, it is a pretty amusing escapade, including an instance where two working girls (prostitues) are fighting over Niel (he doesn’t pay to sleep with them, at time they spend money on him) and the hostel staff decides to break up the fight, by beating up the fighting ladies pretty badly!

Of course, the moment he travels out of South-East Asia where people are obsessed with white skin, he falls into a hard time and can’t score with girls so easily, turning him more and more desperate to reach the goal. Especially in Brazil, where girls are ready to kiss him and grind at the dance floor, but won’t go back with him.

In the end, it is a rather confused book written by a confused writer, searching for some novelty by hoping to do something different.

After all, if you wanted to read a travel book, you would read one.

If you wanted to learn pickup, there are better resources out there.

And thus this book ends up neither here, nor there. Rather it ends up as an amusing memoir if you manage to look over the shallowness of him and some of the women he meets and the grammatical errors.

So would I still recommend reading Around The World in 80 Girls?

Hell yes! It is entertaining and a light read and the title is funny as hell. So yes, absolutely. And it might just give you some life goals as well ;).