Mountains and Himalayas in particular, have the ability to heal body and soul like nothing else. “Becoming a Mountain” is Stephen Alter’s journey to recovery, from the deep physical and mental trauma he and his wife receives at the hand of 4 thieves, who invade their Mussorie Home and assault the couple brutally.

They also make Stephen feel for that first time that he didn’t belong in India. Even though he was born and raised here, and had come back to settle here once again, after living in various countries during the course of his life. 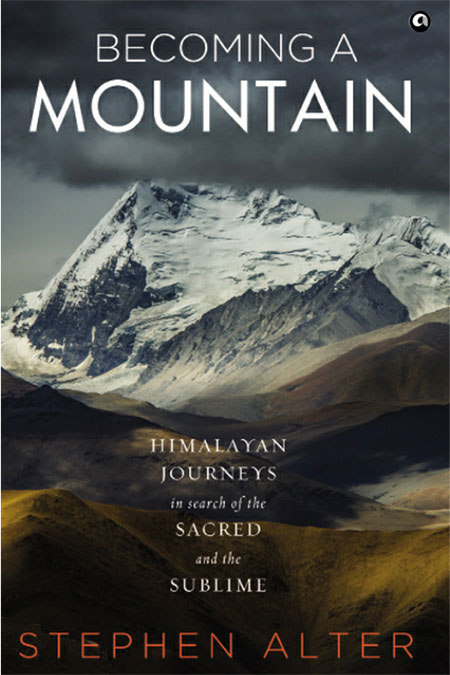 Anyone who has ever undertaken a journey to the Himalayas in distress or pain will be able to identify with what Stephen has written in his book. And it doesn’t really matter whether you believe in God or are an atheist like Stephen. The Himalayas have the ability to welcome one and all and help them recover from their deep wounds.

In fact, that is the reason why the most painful part of this book is also the most interesting and engaging. Especially when Stephen’s journey to recovery is halted briefly and he abandons his attempt to summit Bandarpunch, after receiving word of his father’s impending demise. And just as he reaches his Mussorie home, that his father had built and calls his brother in the US to inquire about the health of his father, he comes to know, his father has passed away a few minutes ago!

Sadly though, rest of the book even though interesting, isn’t as engaging as the initial part.

Mainly due to the fact that Stephen breaks away from his journey repeatedly to quote authors and mountaineers, who had undertaken the journey he is undertaking or hopes to undertake. And their accounts are usually more eloquent and show the lack of depth in Stephen’s own account.

Even though this helped me figure out some of the books I would love to read in future, it kept distracting me from Stephen’s account and made me feel that he was incapable of taking me, the reader on his journey to the mountains. In fact, for me, it doesn’t really matter whether or not he summits Nanda Devi or some other peak in the Himalayas, what matters to me is his journey to the mountain, a journey to becoming a mountain.

And here, he fails miserably.

Nonetheless, Becoming a Mountain is an engaging and informative read, it is just that after setting expectations really high in the initial part, it isn’t able to quite deliver on the premise. I would have preferred to read a smaller book full of a less impressive account of author’s journey than quotes from the books he read and held at a pedestal.