Lust Stories; I decided to watch this movie or whatever you want to call it, mainly because I have been bombarded with its ads on YouTube and elsewhere so much that I thought, let’s just watch and be done with it! 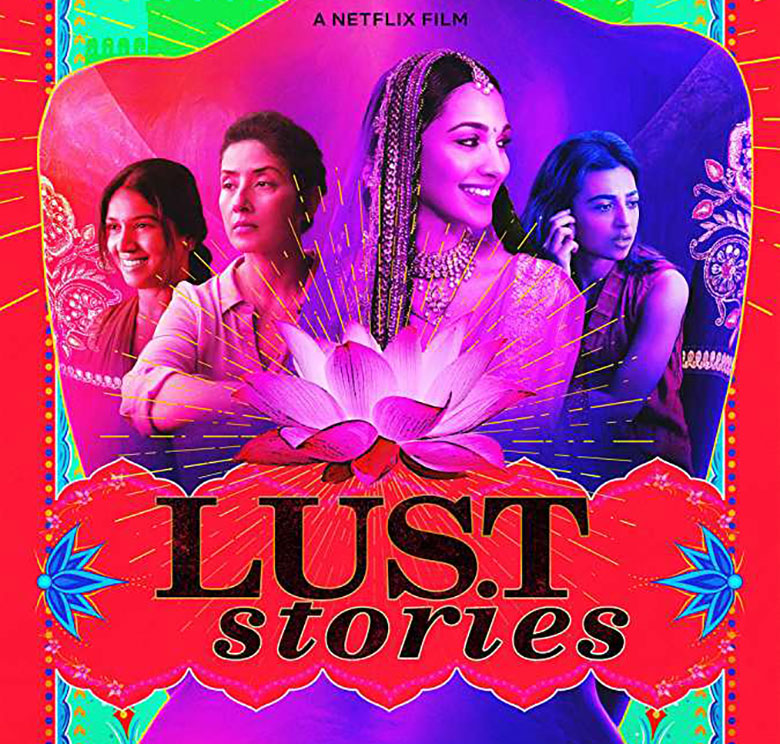 Kiara Advani’s entertaining viberator scene making rounds on the internet also helped convince me that Lust Stories was worth watching, at least once.

What are lust stories?

Essentially, it is a collection of 4 stories about “modern-day relationships” and of course, “lust”, by 4 directors; Anurag Kashyap, Zoya Akhter, Dibakar Banerjee and Karan Johar.

Anurag’s story is about a married professor (Radhika Apte) and her attempt at fulfilling and justifying her lust and obsessiveness for her student (Akash Thosar.)

Akash plays the character of a naïve young college student well and you can sympathize with his character, which wants to be with his professor but is pushed back the instance he confesses his desire to be with her.

Radhika Apte, on the other hand, is plain ole annoying or rather; her character is so freaking annoying that you might want to pick up something and throw it at her. The only reason you don’t, because you realize it wouldn’t hit her, it would just ruin your TV!

The fact that more than half of this story is made up incessant yapping by Radhika, makes it all the more annoying.

Overall, while the story is sort of alright and shows the extent to which we can become obsessive about someone who is no longer paying attention to us but the moment they start paying attention, we lose interest in them.

Everything, of course, is done over dramatically.

It is a story of a maid, Bhumi Pednekar, in love with her employer, Neil Bhoopalam, a bachelor living in Mumbai.

For Neil, Bhumi is just a fleeting romance or rather a way to fulfill his lust and he is all too eager to get married to the girl his parents try to arrange his marriage with.

There isn’t much in the way of dialogues or even a story, but what clicks for the story is Bhumi’s exquisite acting and her dialogue delivery, not through words (she is silent most of the time) rather through her emotions.

Another overdramatic story (girl and boy agree to marriage after meeting for the first time along with family).

Story 3 by Dibakar Banerjee is a story of a woman (Manisha Koirala) disenchanted with her marriage and fed up with her husband (Sanjay Kapoor) and is having an affair with her husband’s friend, Jaideep Ahlawat.

It is the most boring story of them all and that is quite an achievement since pretty much all the stories here are boring and sort of artsy, but not in a good way!

As usual, there isn’t much substance in this story, it sort of builds upto situations and then cuts out, leaving the viewer to guess what happened and frankly speaking, unless you’re going through something like this, it is neigh impossible to actually enjoy watching this story.

I never thought I would live to say these words, but Karan Johar’s story is the most entertaining to watch.

I guess this is reminiscent of a lot of marriages, where the family thinks the primary role and pleasure of a woman is to bear children and husbands think that wham-bam-thankyou mam is the way to go!

Kiara steals it, takes it home to enjoy herself and just as she puts it in, her husband comes home bruised due to an accident. So she picks up the remote from her bed, leaves it on top of the TV (What? Why?) in the second living room (?) and from there it is picked up by Vicky’s grandmother, who thinks it is a TV remote, even though it looks nothing like it and that leads to Kiara orgasming in front of her husband, mother-in-law and brother-in-law’s wife with the Kabhi Khushi Kabhi Gham track playing in the background [insert facepalm smilie].

Needless to say, this too is over dramatized.

This about the worst thing I have watched in a long while and to think this has a rating of 7.0 on IMDB is just scandalous.

I understand that the stories represent the realities for some, but the way they have been made is absolutely pathetic and uninteresting. Seems like all the directors just gave these stories as an assignment to the worst intern, hoping to get rid of him/her for at least a short while.

Now Netflix, can you please stop showing me ads to this pathetic story and maybe give back those 2 hours of my life, I wasted while watching it?