It is rare for me these days to travel without a power bank, be it in or out of the city. After all, when we are dependent on our mobile phones for everything from entertainment to payments and even booking cabs, it only makes sense to ensure it doesn’t die, when you need it the most.

I used to carry an Ambrane 13000mAh and Mi 10000mAh power bank while traveling. But the Ambrane started dying after charging the phone just once (at times, not even that and that too within a year), leaving me with just 1 good power bank to depend on.

Since Mi had been working fine for the past 3 years, I decided to buy another power bank from Mi and this time around, a 20000mAh one.

After all, the new power bank would be needed to not only charge my mobile phone but also my iPad at times. And during trips, it would have the additional duty of keeping my SJCam charged.

I bought the Mi 20000mAh Power Bank 2i before my Rajasthan trip in February and although I didn’t take my action camera with me on that trip and didn’t need to charge the iPad. This Mi 20000mAh Power Bank was enough to keep both the Honor 6x we had on the trip, fully charged throughout the day. Even though, mobile phones were being used continuously for photography, navigation, music and of course, usual social media and call usage. And still, the Mi would have at least half the charge left at the end of the day!

In fact, I don’t really remember the last time it ran out of charge. Yes, purposely I have tried to completely use it, but it is extremely rare for it to run out of juice and hence it mostly remains fully charged in my bag. 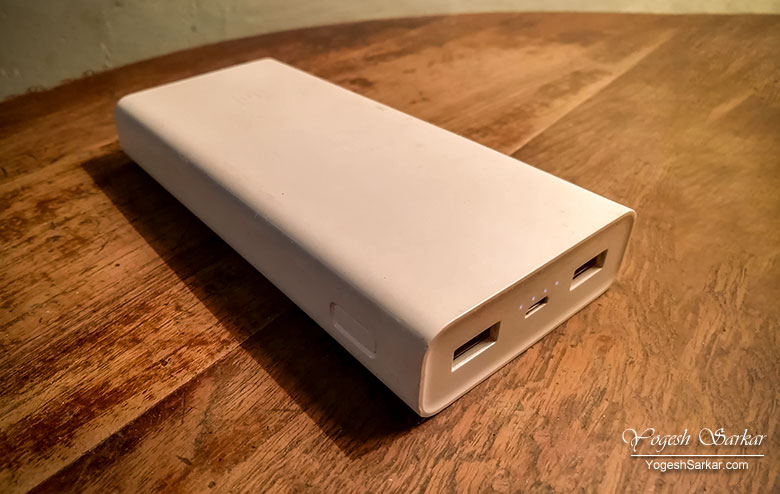 Mi 20000mAh Power Bank 2i supports Quick Charge 3.0, but I couldn’t test it since I do not have a compatible device. However, my sister’s Moto G5 Plus has fast charge and this seems to work with that as well.

If like me you have a phone without quick charge, then it works as a 2A charger and you can charge 2 devices at 2 A simultaneously.

The power bank is bulky (same size as my Honor 6x and 3 times thicker), weighs 358 gm and only comes in white color, which gets dirty quite easily, so you have to keep it protected.

It does take a long time to charge fully, around 6-7 hours with a 2A charger, so I prefer to charge it overnight while traveling and then use this to charge my phone throughout the day.

I am not a fan of the short cables that power banks normally come with. I prefer to use this with Mivi 6ft long braided Micro USB Cable, which is tough and allows me to keep the power bank in my bag or elsewhere in a car and my mobile phone in my hand or pocket.

Overall I am satisfied with the Mi 20000mAh Power Bank 2i so far and for Rs. 1599, I feel it is value for money. I hope it keeps performing as well as it has been for the past 4 months. In case of any issue, I will update this blog post.