Fire is a restaurant located in The Park Hotel in Connaught Place. Even though it is an Indian Cuisine Restaurant, it is known for its contemporary twist and use of organic vegetables and lentils in dishes.

Initially, I was hesitant to go to an Indian Restaurant in a 5 Star Hotel. After all, what is the point of paying for a really expensive dal? Well, that is what I initially thought and went to another restaurant on Janpath. However, it was completely booked for a party, so I decided to give Fire a try.

The ambiance of the Fire Restaurant is centered on the element of fire with a generous use of yellow and orange colors. It is a relaxed restaurant without any TV (Mist in the same hotel has one for viewing the football world cup) and a simple yet classy décor. In particular, I loved the hanging bulbs, they really added to the charm of the restaurant. 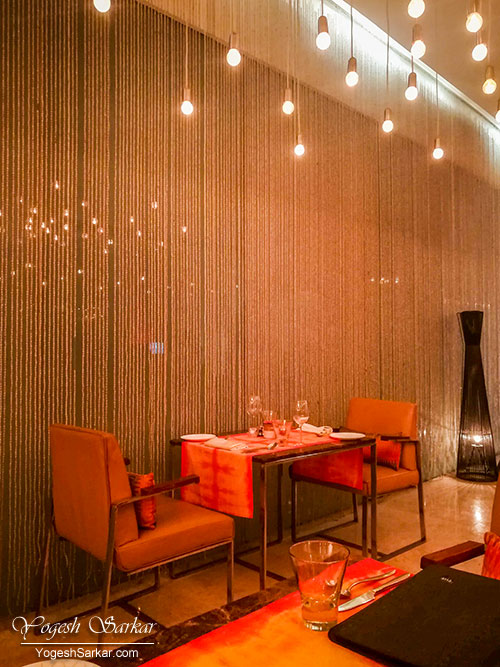 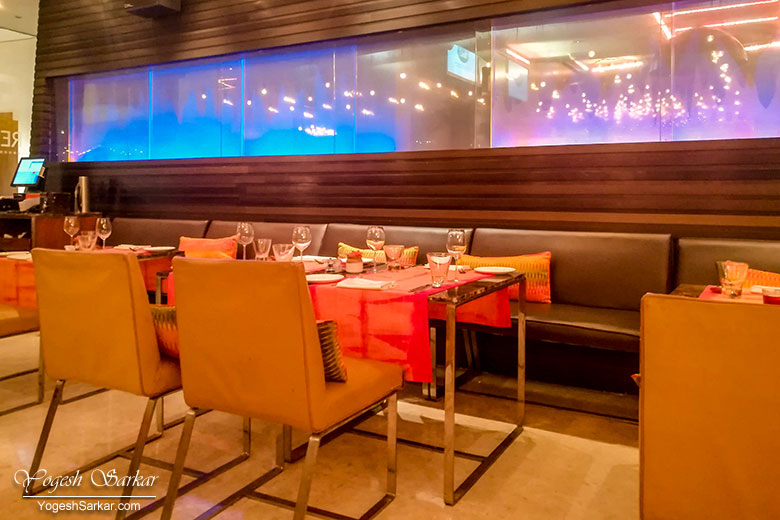 Having said that, I didn’t find the chairs comfortable.

The hallmark of any good restaurant is its service, irrespective of whether it is located by the side of the road or in a 5-star hotel. The service at Fire didn’t leave us disappointed. It was prompt and courteous, with the floor manager explaining a couple of their signature dishes to us and even letting us know about the organic vegetables and lentils they use in cooking.

The most important aspect of any restaurant is the food. If the food isn’t delicious, no matter how good the restaurant is on paper, it is worthless.

We ordered a 3-course dinner at the Fire, with Bhutte Ka Kees Taco as the starter, Fire’s Signature Tadka Vegetables, and Khubani Stuffed Malai Kofta as the main course along with a Garlic Naan and a Kalonji Naan. For dessert we ordered Warm Bebinca with Rabdi Kulfi, Chia Seeds and Jamun Ki Cannoli served with stuffed litchis. These were drowned with Virgin Mojitos.

The Virgin Mojitos we ordered were made to perfection, though some might term them a little sweet. Instead of plastic straw, we were provided paper straws, which are environmentally friendly. Though on the downside, they dissolve after a while, so it isn’t a good idea to keep them in your drink for a long time. 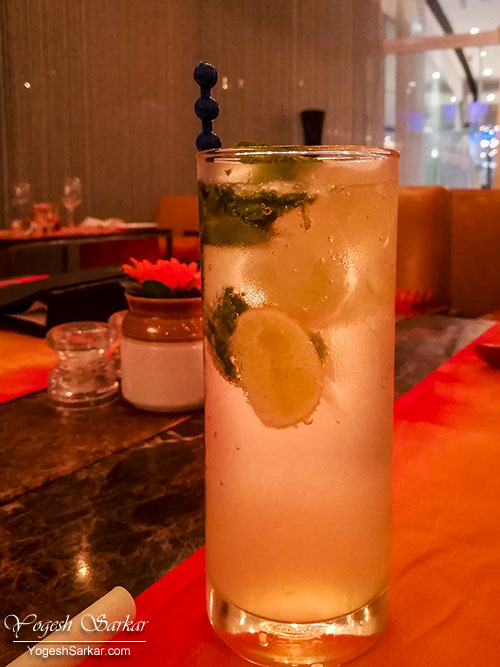 Bhutte Ka Kees Taco was recommended to us by the staff since it is their seasonal specialty and an Indian take on Mexican tacos. The taco was stuffed with corn, avocado and other bits of vegetable along with fresh peanut and avocado chutney and Indian masalas and topped with micro greens. It was finger licking delicious and even though different flavors were easy to identify, their fusion was to the perfection! 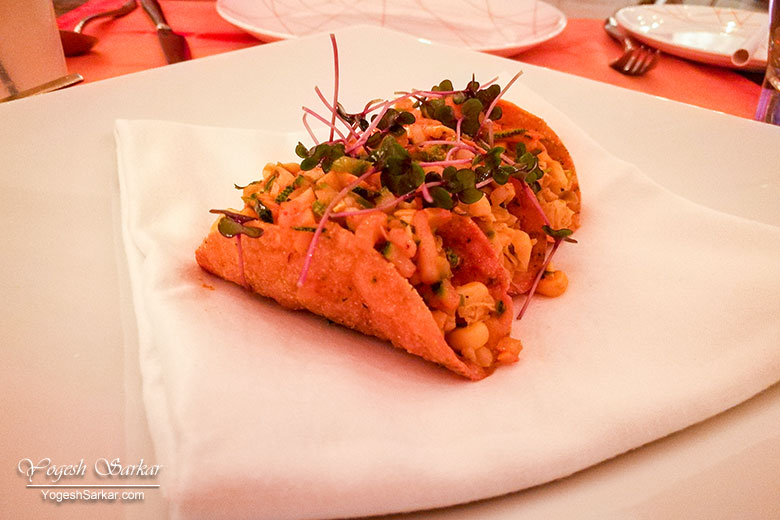 Fire’s Signature Tadka Vegetables is a really interesting dish. For it takes the mostly foreign vegetables and adds Indian flavors to it! After all, rarely do you find baby corns, asparagus, broccoli etc. stir-fried in an Indian style with Indian masalas. And the result was pretty impressive and delicious. 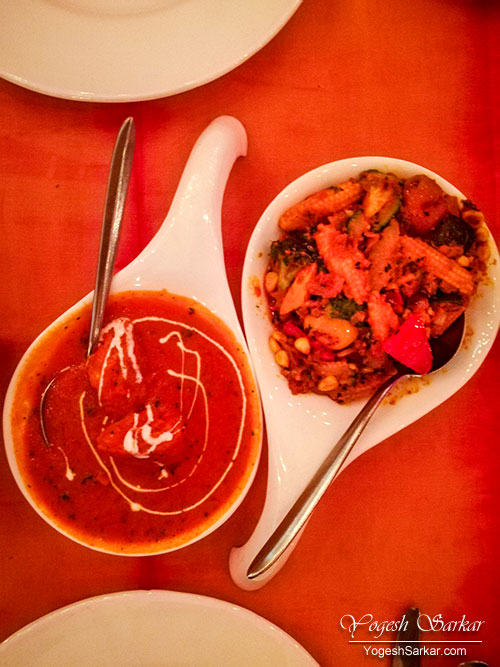 However, it was the Khubani Stuffed Malai Kofta, which stole the show for me. The Kofta made of paneer and stuffed with apricot was delicious, to say the least, and without any lumps or hardness. However, the tomato and fenugreek sauce it was cooked in was just amazing! It had just the right amount of volume and sourness to feel rich and delicious (though some might term it a little salty.)

Garlic Naan as well Kalonji Naan were good, soft and cooked to perfection, though they didn’t have a lot of flavor in them.

Jamun Ki Cannoli served with stuffed litchis was just about alright, but in comparison to the rest of the dishes, it was disappointing since apart from jamun pieces on top of Cannoli, there was no flavor of jamun in the Cannoli itself. Add to that, the litchis weren’t stuffed! 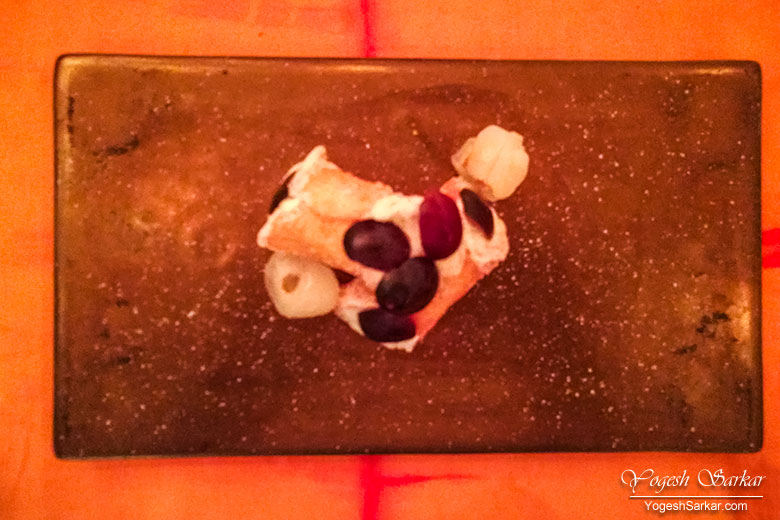 Warm Bebinca with Rabdi Kulfi, on the other hand, was mouthwateringly good! A traditional 7 layer Indo-Portuguese pudding is something I ate for the first time and I fell in love with it. Even though it was quite sweet, eaten with Kulfi it felt just right. On top of that, the presentation was quite good as well. 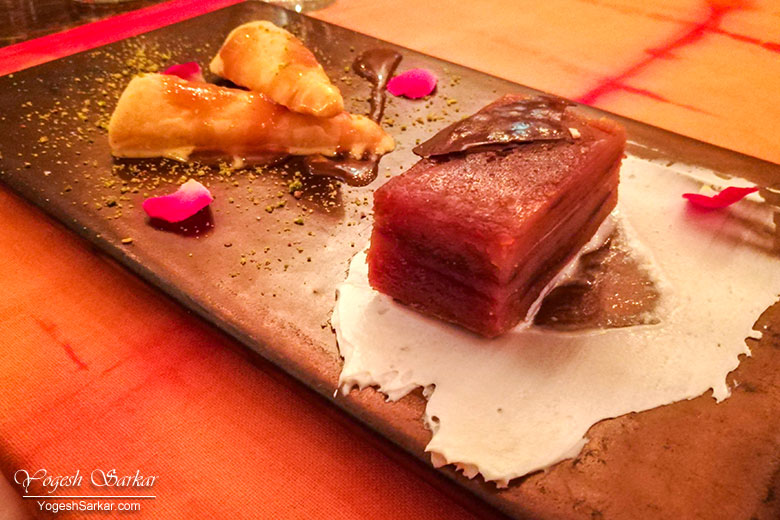 The only sore point when it came to food was the small serving size of starter (3 tacos) and the main course.

Mansi and I enjoyed our dinner at the Fire Restaurant in The Park Hotel; it was a wonderful and delicious experience. The fact that it wasn’t all that expensive (veg main course dishes were priced at Rs. 445, excluding tax) made it all the more wonderful experience.

One noteworthy point to mention is that they have a organic produce market organised every Sunday from 7 am to 9 am at The Park Hotel, where local organic farmers come to sell their produce.