I never felt comfortable talking on my mobile phone, while I was walking down the street. Not only is it inconvenient, it also makes you oblivious to the world around you and thus more likely to fall victim to crime eg. phone snatching. Since I take cabs regularly, I often have to stand by the side of the road (often late at night) and speak to the driver, thus making calls on the street unavoidable.

Due to this, I had been looking for a Bluetooth headset for a long time. Since it is less distracting than a wired or wireless earphone, which end up occupying both your ears and blocking out sounds.

After a lot of searching, I finally zeroed in on Mi Bluetooth Headset (Basic), since it was not only cheap (Rs. 899 including shipping); it came from a company that I trust to produce VFM products.

Mi Bluetooth Headset ships with three different sized earbuds and a small micro USB cable you can use to charge the headset. 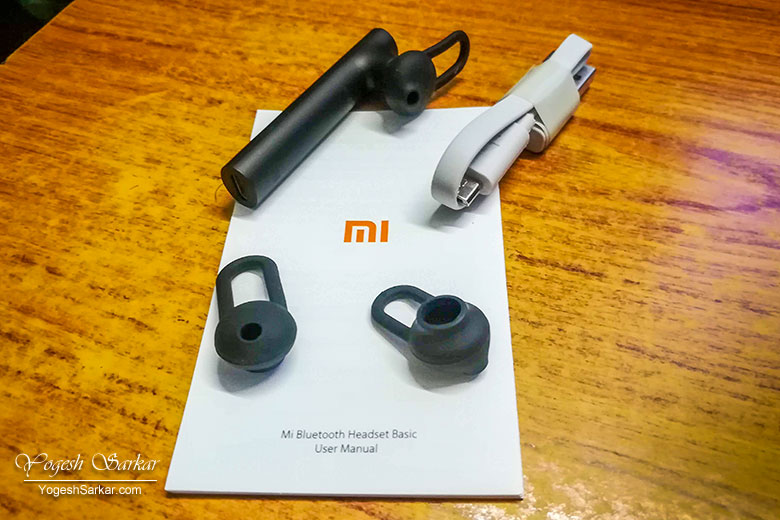 The fit of the headset is quite comfortable and it stays in your ear, even if you’re walking fast. Though you might have to try different earbuds to see, which one gives you the most comfortable fit.

Sadly though, changing the earbud requires some effort, especially getting the new one on and it isn’t as easy as changing earbud on a earphone.

On the plus point, since the headset is quite light (6.5 g), once you get a comfortable fit, you won’t have trouble wearing it for prolong usage.

You can also easily accept or reject phone calls using the button on the headset. And there are volume buttons which double up as media controls.

Irrespective of whether you’re using a fast or a slow charger, this headset takes its own sweet time getting charged. Even though the battery is just 50 mAh, it still takes a couple of hours to recharge. And even if you’re planning to top up the charge with more than half the battery life remaining, it still takes at least half an hour or more to charge.

Thankfully though, once it is connected to your phone, you can see the battery percentage in the status bar. Sadly though, it isn’t very accurate with my Honor 6x and still shows around half the battery remaining, even when the headset tells you it is running low on battery (there is a voice prompt as well as the indicator light turns red.)

You can get around 3 hours of talk time out of this headset and it has given me over a week of standby time with a few calls, even when it was connected to my phone for at least 8-9 hours a day.

As far as Bluetooth performance is concerned, it is pretty good. I have walked 10-15 ft away from my phone and it remained connected just fine.

As far as call quality goes, it is disappointing. For starters, the speaker in it doesn’t get as loud as my Mi Earphones and just about reaches half it’s volume. Add to that, since the microphone is away from your mouth, your voice isn’t as clear as it would be if you were using your phone directly or had placed the wired earphone’s microphone near your mouth.

Due to this, I do not use Mi Bluetooth Headset for long or important calls and prefer to use my earphone instead. Also in case of noisy environment eg. drums being beaten 15 ft away from you, it is next to impossible to make out what the other person is saying and using phone directly works better.

Another issue I have faced with this headset is that while playing media on phone eg. Instagram or YouTube video, it is unpredictable. At times the phone plays the sound through the headset and at times directly. Same is also true for WhatsApp calls and furthermore, WhatsApp doesn’t let you switch from Bluetooth headset to phone, without disconnecting the headset first.

Is it worth it?

If you’re looking for something to answer short calls with, where voice quality doesn’t matter or you’re going to be taking calls in a quiet environment or you’re looking to make calls while walking on the street, then the Mi Bluetooth Headset makes perfect sense. Especially since it is small, light, and cheap and comes with enough standby time to get you through the workweek.

However, if you’re looking for an all-in-one solution or are looking for something to take important calls with, it is better to look elsewhere.