It has been over a year (15 months to be precise) since I first started using Philips Air Purifier at home. I have their entry-level model, AC 1215/20 and it has almost the same level of filtration as their higher end models (3-stage; pre-filter, Carbon, and HEPA), with the primary difference between it and more expensive models being the amount of air that can be purified in an hour. 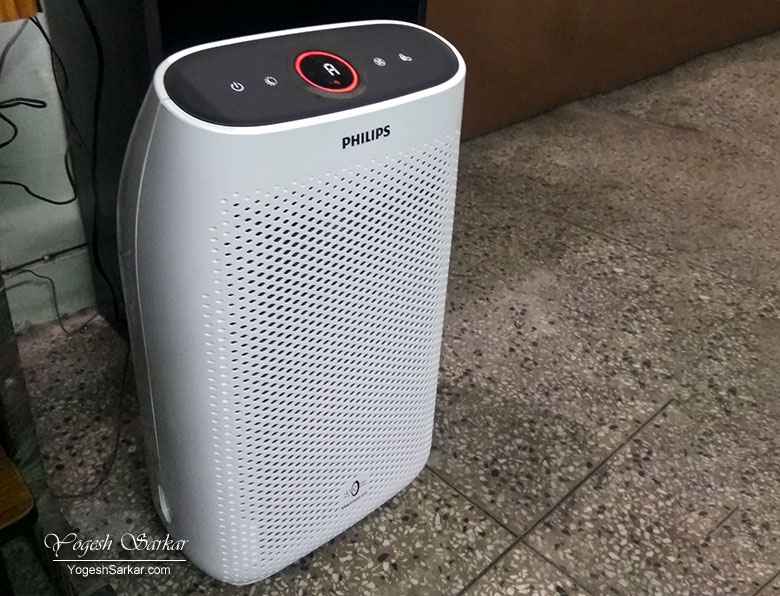 A word of advice for anyone planning to buy a air purifier for home; stay away from those purifiers, which have ionizers. Since they produce ozone gas, which at surface level is harmful to lungs. Always opt for an air purifier, which relies on HEPA or similar style of the filter to remove pollutants from air and is ozone free.

During the course of this review, I’ll share my experience of using this air purifier and also compare it briefly with the Mi Air Purifier, which I bought later on for my other room. Though a detailed comparison of both, along with a review of Mi Air Purifier is due and would be posted soon.

Why I bought Philips Air Purifier?

I bought the Philips Air Purifier last year after I developed asthma and was confined to my home. I wasn’t sure if it was due to pollution (which was extremely high at that time in Delhi) or due to some other allergy. However, I knew I needed to do something beyond the medicines to ensure my lungs could breathe free and easy and started researching home air purifiers. And after much research, I bought the Philips Air Purifier.

However, since it is trying to clean the air present indoor and there is only certain amount of air it can clean per hour, it will not work properly, unless you close the doors and windows (just like in the AC). Otherwise, outside air will keep bringing pollution in, while the clean air will keep going outside, reducing the effectiveness of the purifier and life of filters.

Pre-Filter: Pre-Filter is sort of like the AC filter, but better. It helps filter large particles of dust and needs to be cleaned on a regular basis. Even though your mileage would vary based on the amount of dust and pollution present at your home and locality, I have found that it needs to be cleaned every week. And washing the filter is a better bet than vacuuming it (it is recommended to wash the filter and dry it, before putting it back in the air purifier.) This filter does not need to be replaced unless it gets damaged. 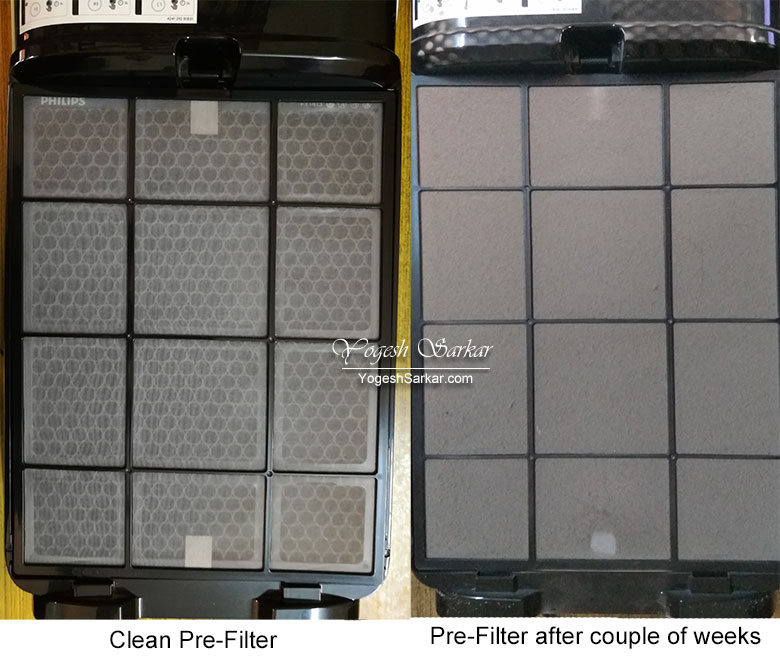 Activated Carbon Filter: This is supposed to remove TVOCs and odors. Frankly speaking, it does not neutralize the smells in the room as I was expecting it to and hence I haven’t bothered to replace it, even though it is supposed to be replaced periodically. Even this filter gets a fair amount of dust on it, despite being behind the pre-filter. So I like to clean it weekly with a vacuum cleaner, though dusting it outside also works. 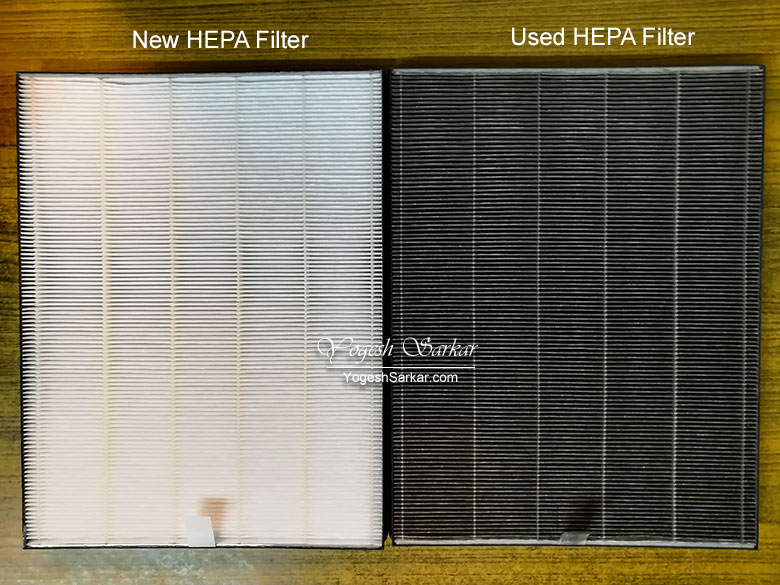 Having said this, if you’re expecting miracles i.e. completely clean air, even when PM2.5 level is 200 or more outdoor (recommended level is below 50, in Delhi its 400 or more during high pollution months), then it is unlikely to happen, unless you can fully seal the room and prevent outside air from entering your room (extremely difficult to do).

This is the reason why you need multiple air purifiers, one for each room and also need to ensure your home is kept clean. If not, you will be dissatisfied with this or any other air purifier.

Also, I have found Philips Air Purifier to be stricter than Mi, when it comes to showing the pollution level through color (there is no PM 2.5 reading). It shows blue level (clean air) around 50 or less, while the Mi switches to green (clean air) around 75. Similarly, high pollution level i.e. red is shown around 150, while the Mi shows that around 250. 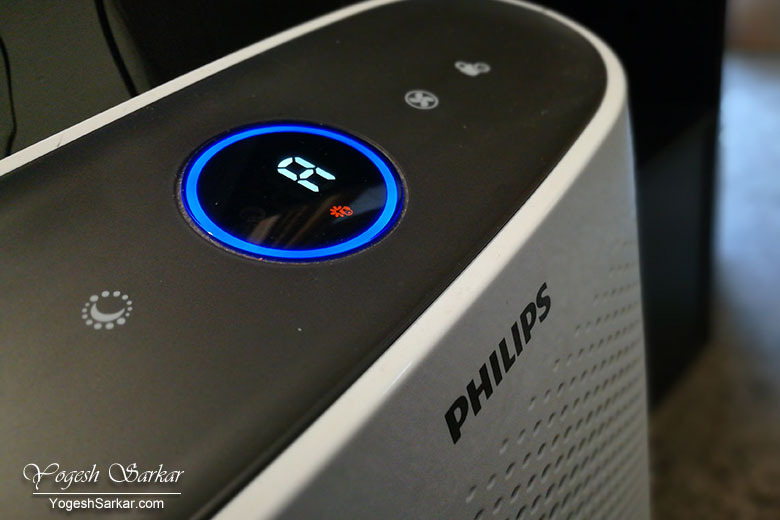 So in the case of high pollution days, you might not see any change in the color of the ring, thus making you believe, that the air purifier isn’t working. Even though, this isn’t the case.

In order to reduce electricity consumption, you can set the air purifier to low fan speed. But it would then purify less amount of air. In any case, it consumes less energy than a ceiling fan, even at its highest speed. I usually keep it at 2 or 1 during pollution-free days eg. monsoon season and bump it to 3 or turbo during peak pollution time.

Filter replacement is essential and expensive. HEPA filter costs 2.5k and if you don’t replace it, air flow reduces gradually and eventually, the air starts smelling foul and it is unable to properly clean air any longer.

Even though the Philips air purifier is supposed to tell you, when to replace the HEPA filter by showing A3 code on the display (C7 for carbon), I found that if the air flow has decreased (sound would be subdued) and you can see black marks on the back of the HEPA filter (see below image, though it should be less than this) it is time to replace it. 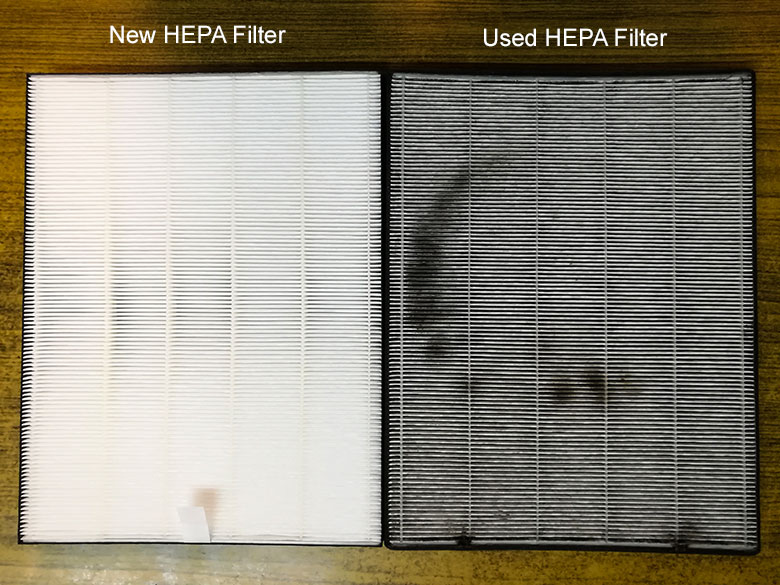 The first HEPA filter lasted over 6 months (should have been replaced in 5 months), second lasted 4 months (winter, maximum pollution) and the current one is about to complete 5 months. Filter life is dependent upon the amount of pollution in your area and the amount of time you’re running the purifier. Lesser the pollution, longer the filter would last.

Sadly though, Mi Air Purifier’s 3-in-one filter seems to last longer than the filters in Philips Air Purifier (costs less as well, especially since in Philips you’re supposed to replace Carbon Filter as well), even though Mi Air Purifier is capable of delivering more clean air per hour 310 m3/h vs 270 m3/hr.

As far as the build quality goes, Philips 1000 series AC 1215/20 air purifier is built well. However, it isn’t without its quirks.

For instance, it is all too eager to enter the sleep mode (known issue in all units), if a shadow falls on it or somehow the light level is low. There is no way to prevent that and it slows down the purifier. This is why, I no longer run the purifier in auto mode and instead, set the speed manually, based on pollution level.

The display ring which is supposed to show pollution level also flickers at times or the half of it shows different colors or switches off automatically (a known issue in the majority of units). This does not impact the performance of the air purifier, but it is a major annoyance and something, one wouldn’t expect to see, after spending Rs. 9,000 on a fairly simple appliance!

Filter cover can be a little difficult to align properly at times.

Apart from this, I haven’t encountered any major issue.

The noise of the Philips Air Purifier even at turbo speed isn’t audible during summer unless you only have an AC running at quiet mode. However, during winter, it is quite audible at 3 and turbo speed. Add to that, during winter it can make the room seem chillier than usual, since it is moving a lot of air around.

Even the features that are there eg. sleep mode, is more of an annoyance than something useful.

Overall, I am satisfied with the Philips 1000 series AC 1215/20 Air Purifier, even though in hindsight, it isn’t as feature rich or economical as the Mi Air Purifier 2.

Even though it is a continuous expenditure rather than one-time investment, I can breathe better this year than last year and for good health in a polluted Indian City, it seems Air Purifiers are a necessary expense or rather, tax, just like water purifiers.