Narcos Mexico is the latest series from the makers of Narcos; while Narcos (3 seasons) was based on Pablo Escobar and the Columbian Drug Cartel. Narcos Mexico is based on the Guadalajara Drug Cartel and the man responsible for bringing it to life, Félix Gallardo aka El Padrino (The Godfather.) 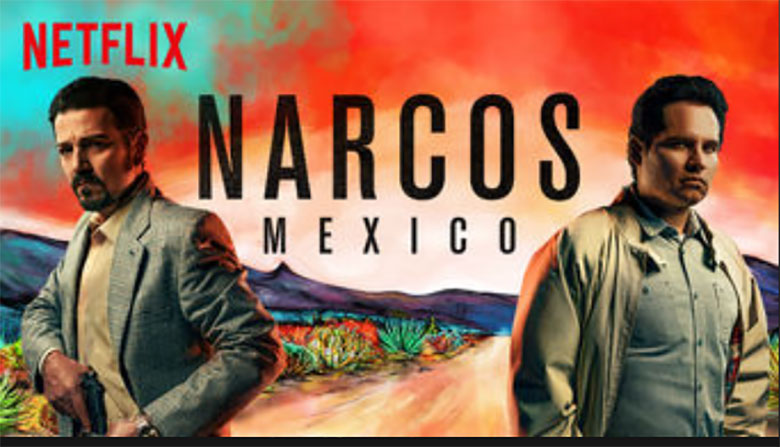 It shouldn’t be considered as the fourth season of Narcos, because this is an entirely different series. Though Cali Cartel as well as Pablo Escobar make a brief appearance in this series and have dealings with the Guadalajara Drug Cartel.

Compared with the original Narcos, Narcos Mexico seems timid and slow. There is much less violence (at least initially) and even less willingness to name the people in authority, with the names of politicians being mentioned (spoiler alert) during the interrogation of DEA Agent, Kiki Camarena actually being censored out of the show!

Having said that, Narcos Mexico does go a long way to showcase the smartness of Félix Gallardo and the rot in the Mexican establishment, be it the politicians and bureaucrats or the police or even the army!

Due to this, it is an interesting crime drama and keeps you engaged throughout the 10 episodes. Though it is towards the end (last 3 episodes), that it gets really interesting.

Though one cannot help but miss the oomph factor and ferocity of Pablo Escobar. And in comparison, Félix Gallardo seems like a rather meek drug lord, bowing to the bureaucracy and circumstances, while trying to make the best of the situation.

Having said this, with the entire system in Mexico being so rotted, he probably just needed to play it rather than indulge in maddening violence like Pablo Escobar and he comes out looking more like a smart businessman than a drug lord or a don!

Acting as well as direction is top notch, as one would expect from a spinoff series from Narcos and Narcos Mexico is a must watch despite its lack of violence (comparatively speaking of course)!

I sure hope there will be another season and it would be faster and more ferocious than the current one.