RTDC (Rajasthan Tourism Development Corporation Ltd.) is a government-owned and run Tourism Company and it runs numerous hotels in Rajasthan, including the Sarovar Heritage Hotel in Pushkar.

Built between 1590 to 1614 AD by Maharaja Man Singh-1, the Man Mahal has been renamed Hotel Sarovar by RTDC. Though, I would have loved to see it carry the name and the legacy of its glorious past. 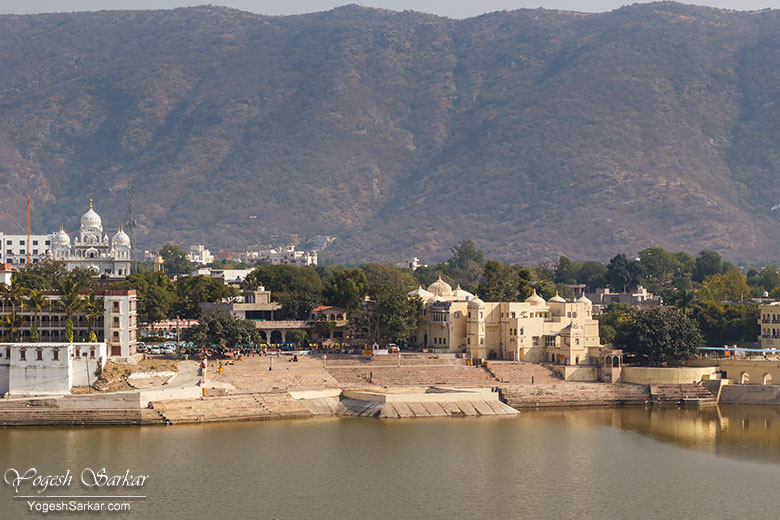 I love staying at RTDC Sarovar in Pushkar because it has safe parking and it is conveniently located at the beginning of the market and Pushkar Lake, though it is around a kilometer and a half away from the camel fair ground. 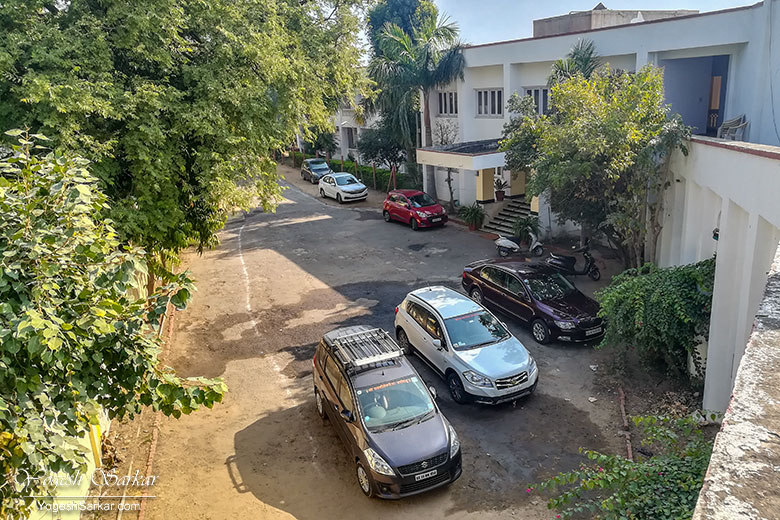 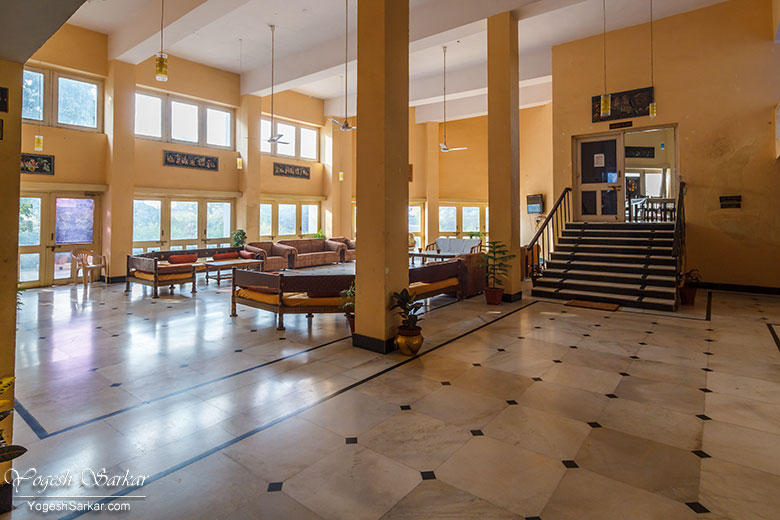 RTDC properties are generally good, though some of their hotels can surely do with a bit more maintenance and same sadly holds true for Sarovar.

There is no power backup and during my stay, there were multiple power outages each day. There is no Wi-Fi either.

During my Christmas Trip to Pushkar, I initially stayed at the RTDC Sarovar non-ac room for one night, followed by 2 nights in their AC room.

The non-ac room I stayed in (226) was located on the first floor of the new wing and had two balconies (rest of the rooms have one balcony). 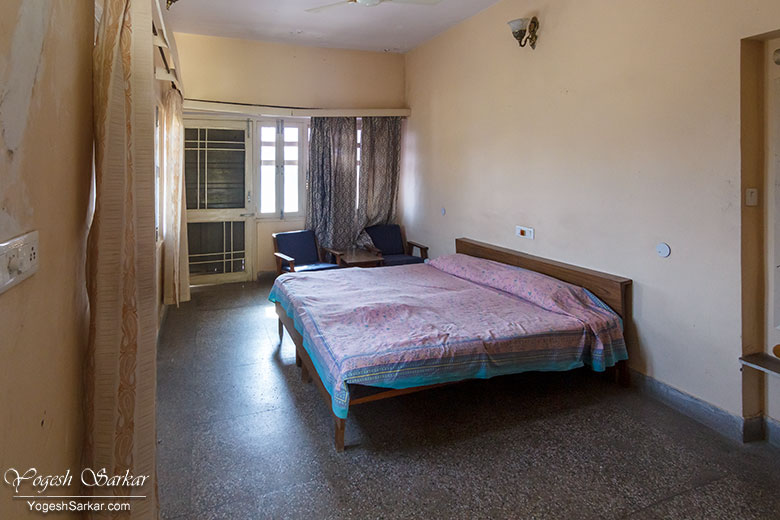 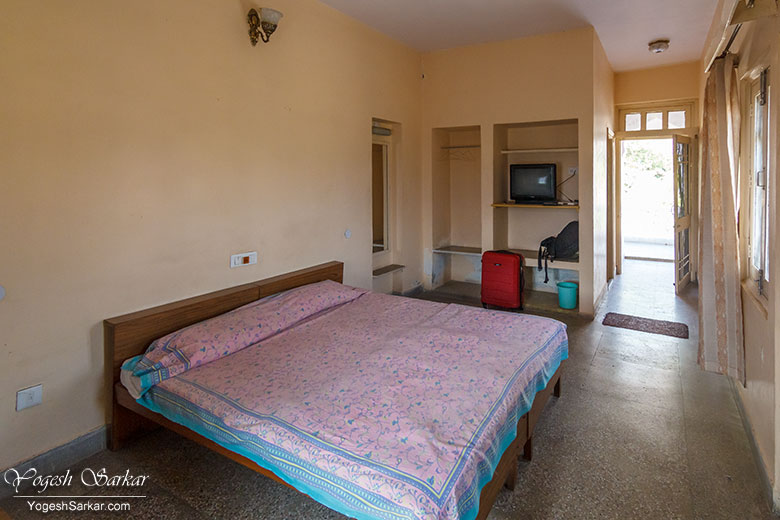 As can be seen from the photographs above, the room needs maintenance and even though the bed sheets were clean, they were worn out and had a few stains. Bed too had seen better days and would easily creak while getting on and off.

Apart from this, the non-ac rooms had room coolers permanently attached and one couldn’t close the window in front of it to prevent cold winds from entering the room. This made the room feel colder than it should have. There was no heater provided in the room, though the bathroom had a geyser.

For Rs. 1,200 a night plus taxes (during winter season), it included breakfast and felt like a VFM option, though cheaper rooms are easily available in Pushkar.

However, it was their AC room located on the first floor of the old building (213) that took my breath away. It was not only larger than the non-ac room; it also had a heater and one of the best views of Pushkar. 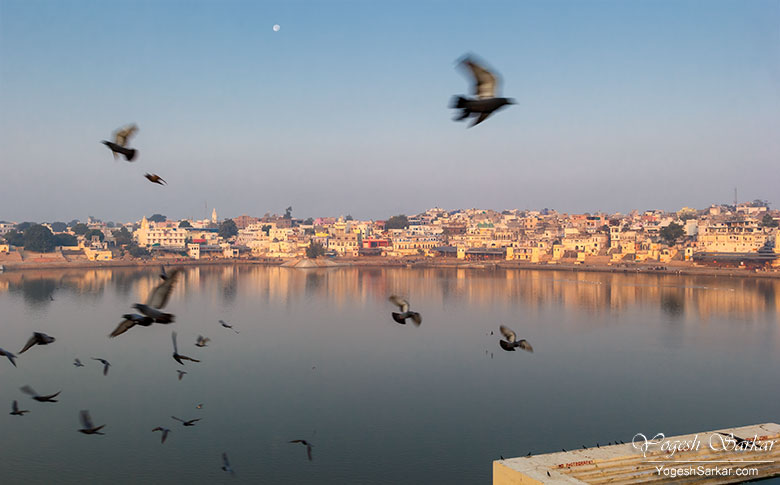 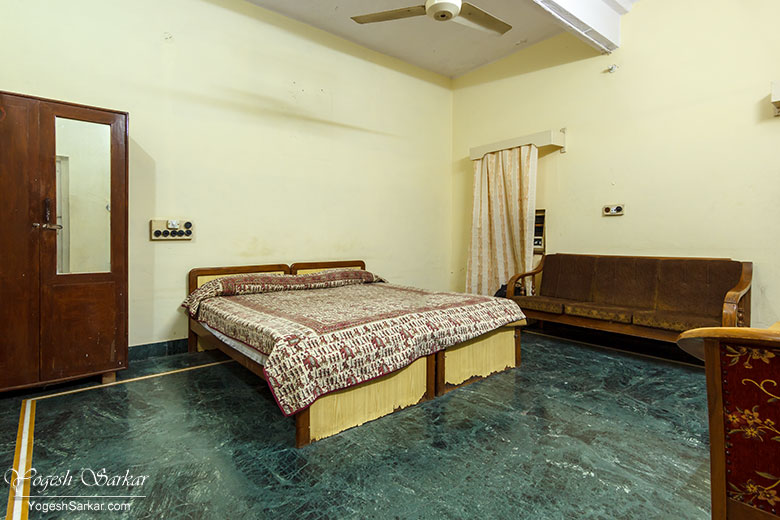 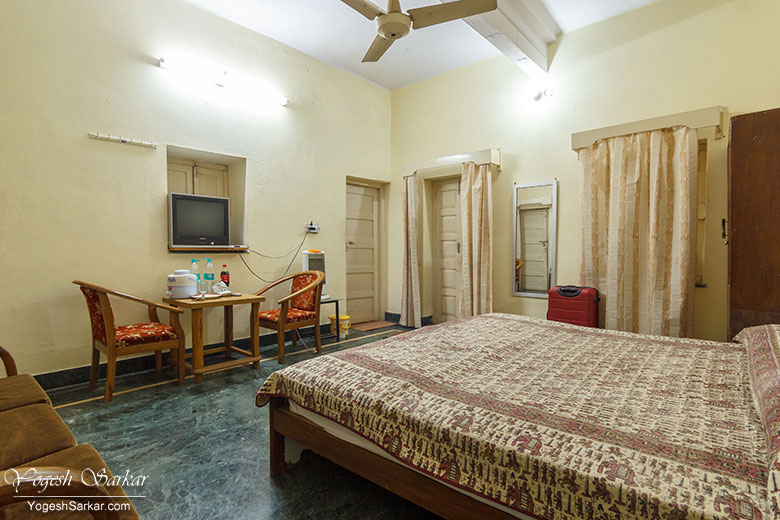 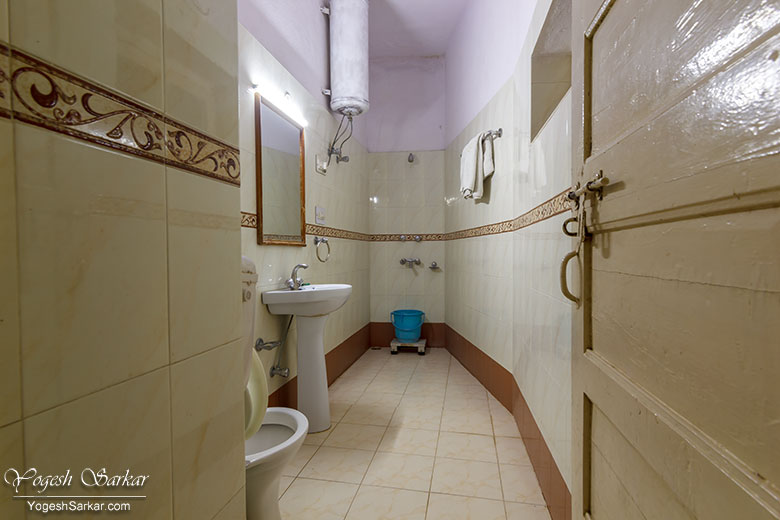 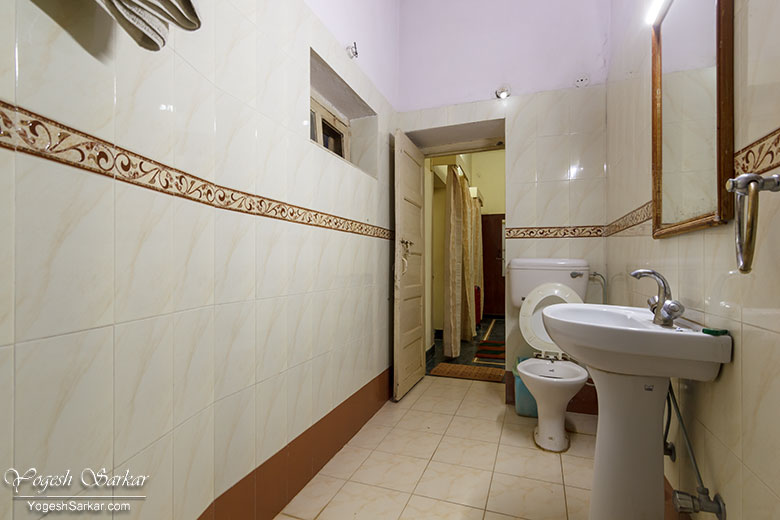 However, it wasn’t without its set of problems with the toilet jet not working initially, though it was rectified later in the evening by RTDC staff. The room is also quite dark if the lights aren’t on since there is only one window in the room and it too has the old style wooden panes.

The balcony was an amazing place to spend time at, but there is always a fear of monkeys (there are a lot of them in Pushkar) during the day and while doing photography in the morning, I had to abandon my time-lapse in the middle and come inside, since the monkeys had amassed on the roof. 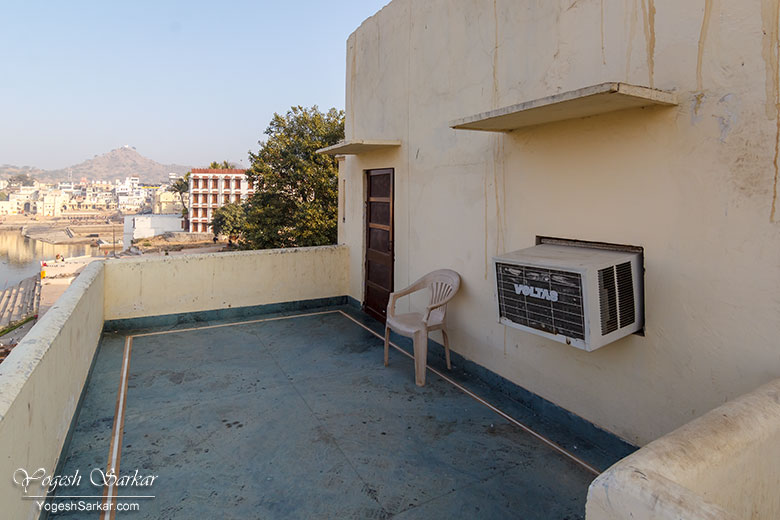 However, for Rs. 1,900 plus taxes (including breakfast), it seemed like a good deal.

In fact, the entire old wing with AC rooms, family rooms and standard rooms seem like a good bet, as it gives you the feeling of staying at an old heritage property, unlike the new wing, which seems like just another hotel. 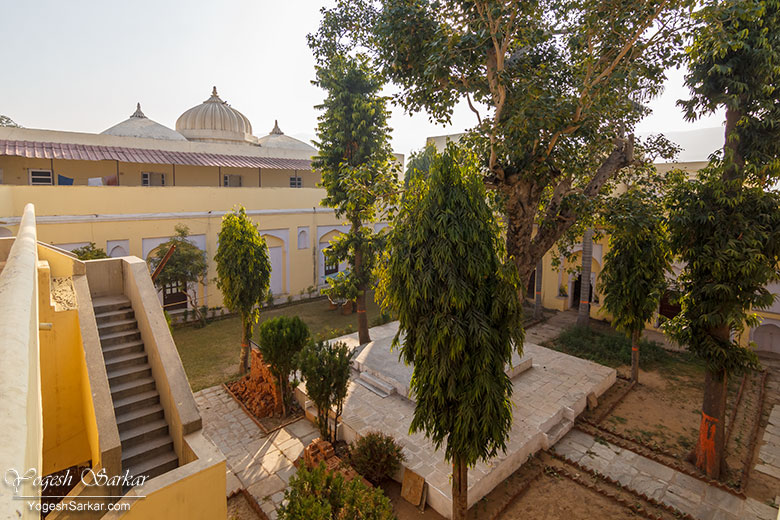 The breakfast buffet alternated between the usual aloo-puri and butter-toast and cutlets with bread toast and poha. Even though breakfast was decent, it wasn’t as good as what I had at RTDC Moomal in Jaisalmer. 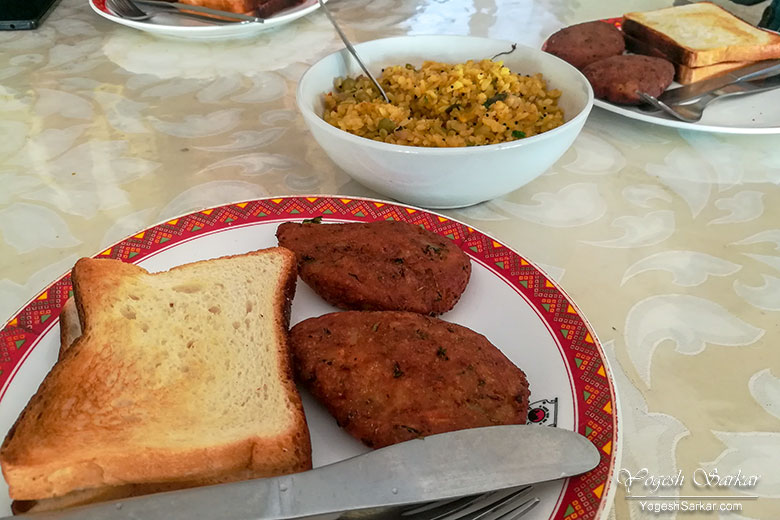 Service, for the most part, was good and courteous, though that had a lot to do with the fact that we tipped them Rs. 100 each in the beginning and then towards the end of our stay and that served as a good motivation with even the breakfast being served on our table.

Having said that, there are no intercoms in the rooms, just a bell and no one seems to answer those. So you would be better served by calling the front desk directly from your mobile phone, in case you need service.

Overall, despite the shortcomings, I enjoyed my stay at RTDC Sarovar and found it to be VFM. However, I would love to see RTDC do a better job with the maintenance of the hotel as well as see them upgrade the rooms with modern amenities like LCDs instead of CRTs and intercoms instead of bells that no one answers. Also, the breakfast buffet spread can be a little more generous.