A little over a month and a half ago I bought a bottle of HealthVit Apple Cider Vinegar and started drinking it first thing in the morning. 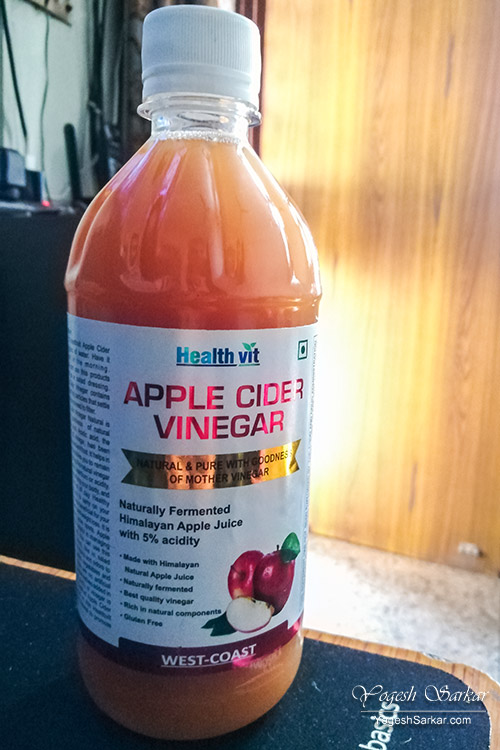 I started doing this because I was suffering from hyperacidity and acid reflux and it was getting so bad that I used to feel burning sensation in my throat and stomach, every time I ate something.

I had tried drinking lemon in warm water in the morning and while it helped somewhat and so did lemon soda, they were only effective for a short duration. This is when I decided to give a shot to Apple Cider Vinegar, which is supposed to provide similar benefits as a lemon.

Interestingly enough, I found it to be beneficial from the first day itself and although if I skip it for a day or two, I still suffer from hyperacidity. I no longer suffer from it, as long as I am consuming Apple Cider Vinegar along with warm water and honey, first thing in the morning.

There are also other health benefits of Apple Cider Vinegar (as mentioned in the video below), including weight loss. However, I have not noticed anything of that sort until now.

As far as I had read, it was a good idea to buy unfiltered and undiluted Apple Cider Vinegar with Mother Vinegar in it. And even though Bragg Organic ACV is quite a famous ACV brand in India, it is expensive with an MRP of Rs. 640 for 473 ml (usually available for 5-20% discount).

So I started looking for alternatives and came across HealthVit Apple Cider Vinegar, which was supposed to be just as good as Bragg (at least on paper) and had an MRP of Rs. 450 for 500 ml (usually available at 40-60% discount).

I had used HealthVit products earlier and found them to be quite decent, and since I was going to try ACV for the first time, I did not wish to spend a lot of money on something I might not end up liking.

However, as mentioned above, I found ACV to be quite useful and managed to finish the first bottle easily. Since HealthVit ACV was beneficial for me, I decided to go for it again.

Maybe Bragg is better than HealthVit or maybe they are similar, I have no clue. However, for the price, HealthVit Apple Cider Vinegar seems like a good deal and it is providing me with good results so far.

Overall, I am quite satisfied with it and I hope, all that talk about weight loss due to ACV comes true as well :D. However, I would keep using it, even if I do not lose weight; just to keep hyperacidity and acid reflux at bay.