It has been almost three months since I started reading A Song of Ice and Fire by George R. R. Martin, even though the ending of Game of Thrones had disappointed me. 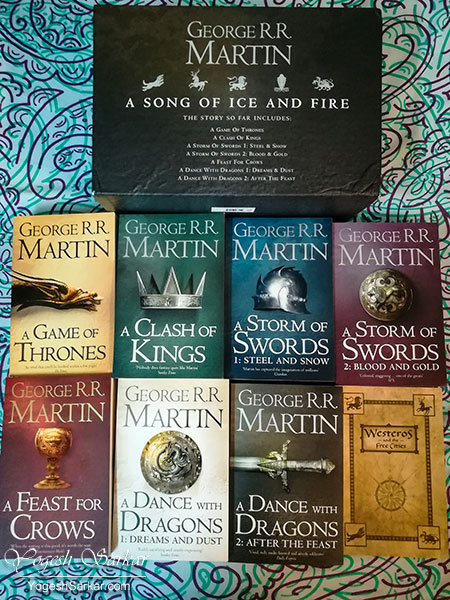 Reading almost 5,000 pages and 7 volumes released until now, I ended up feeling the TV series was an even bigger disappointment!

Because the sheer breadth of story and number of characters in the book is a lot more than what the show represented, especially second book onwards. The show’s makers not only truncated many important characters but also merged some of them, so that they could give a bigger role to some of the characters in the show.

Some of the interesting bits in the book, yet missing in the show were:

Catelyn Stark comes back from the dead.
All Stark children are skin changers, including Jon Snow.
There are multiple suitors for Daenerys, even after her second marriage and these include; Son of Doran Martell, Second and third brothers of Balon Greyjoy and more interestingly, legitimate son of Rhaegar Targaryen, Aegon Targaryen, who was supposed to have been killed during the uprising.
Ramsey Bolton never marries Sansa; he marries Arya Stark, though it is not really Arya, rather a steward’s daughter being represented as Arya.
Mance Rayder is alive.
Jon Snow declines the lordship of Winterfell, offered to him by Stannis, yet was on his way to Winterfell to fight Ramsey when he is killed by brothers of Knight Watch.
Varys kills Grand Maester Pycelle and Kevan Lannister.

Even the above spoilers are just the tip of the iceberg, there is a lot more in the books that were simply missing in the show. And that made the book interesting to me, even though I had watched the show multiple time.

Having said that, the story being built up for the last two books is so much that it is no wonder George R. R. Martin is having a tough time coming out of them. There is so much fate, characters and predictions involved, not to mention multiple claimants to the throne, including Aegon Targaryen leading the Golden Company that you get the feeling it all but difficult for the story to come together and finish in just two books.

Having said that, now I am eagerly waiting for the last two installments and I hope, they are able to do justice to this series and do not fall flat on their face.

As far as the uncomplete, complete book set of A Song of Ice and Fire is concerned, I would recommend it to everyone who loves to read, irrespective of whether or not they have watched the show, because it is extremely good and a fine piece of literature.