I bought Jude The Obscure by Thomas Hardy from Haldwani, when I had to spend a few hours there, waiting for a bus to Delhi. A shop in the flea market of Walkway Mall was selling books by weight and I bought this controversial classic for Rs. 70. 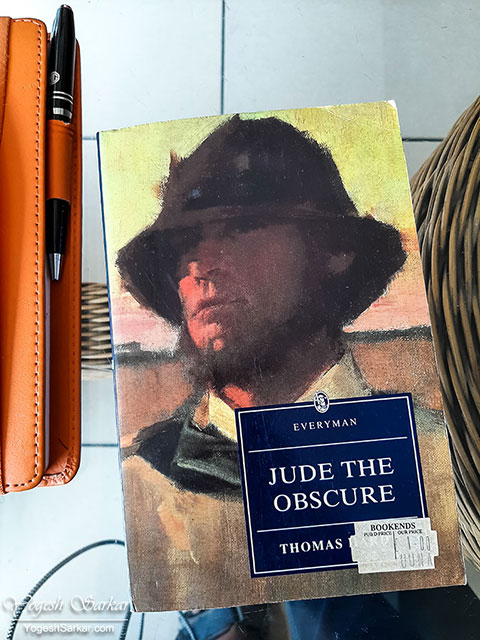 Even though I love the writing of Thomas Hardy, I had no clue what this book was all about, until I opened it and began reading. Supposedly, this book was burnt by a Bishop, because he could not burn Thomas Hardy and thus had to make do with burning a copy of the book and then advertising his act in the local newspaper.

Even though the protagonist of this story is supposedly Jude, a poor orphan, who is raised by an old and angry aunt, in many ways the real protagonist of the story is Sue, his cousin and object of his affection and supposed wife.

More than religion, I feel this story is about disappointments. Not with the God, rather from the world and the fickleness of human emotions, which more often than not, end up completely ruining one’s own life and those of people around it and turns everything that is beautiful, scared and genuine into a twisted pile of dark memories we all can do without.

Simply put, Jude as a boy, dreams of becoming a scholar and going to Christminster to study. He begins to read and learn on his own, while working through poverty. During this time, he marries a rather boisterous girl, who first seduces him into bedding her and then claims to be pregnant, forcing him to marry her, even though she is not pregnant!

Afterwards she leaves him, sick of the poverty and travels to Australia, while he finally fulfils his dream of moving to Christminster, only to learn the truth of the universities he had aspired to attend since his childhood, that they are nothing but the playground of the rich and powerful, with no space for the likes of him.

There he meets Sue, a cousin he never knew he had and falls in love with her beauty, eccentricities and open mind. He introduces her to his first teacher, who now runs a school nearby, so that she can gain employment there. Only the teacher, now a schoolmaster, ends up falling in love with Sue and they both marry, even though Sue loves Jude.

Eventually, she is so repulsed by her husband that both of them start living in different rooms of the same house and when on a night, he mistakenly enters her room, she wakes up startled and jumps out of the first story window, in order to get away from him.

Her husband, saddened by this turn of events, lets her go and she moves in with Jude. Even though both can marry, having divorced their spouses, she never does.

After the birth of couple of children (even though they still aren’t married) and another on the way, a monumental tragedy leads to the death of all four children and she begins blaming her relationship with Jude for it, abandoning her anti orthodox and religious views and begins to believe, she is still married to her first husband in the eyes of God and eventually goes back to him.

Jude on the other hand is once again tricked by his first wife into remarrying her and takes to the bed afterwards.

One day when there are celebrations all around the town, his wife returns from a parade, only to meet a few of Jude’s friends, who ask her to go with them to boat race. She decides to quickly check on her husband before heading to the race, hoping her father has arrived to take care of the consumptive man.

She finds Jude dead in his room and with no sign of her father anywhere. She quietly locks the room, goes to the race, thinking he is dead already, what is the point in her missing out on the races?

Thomas Hardy’s writing along with the story line, makes this book a wonderful read and even though it seems tragic and dark, it contains the worldly lessons, we all see around us, even to this date and is an interesting take on the supposed beliefs and moral values of human beings, which change as per convenience or circumstance.

I thoroughly loved it and would recommend Jude The Obscure to anyone who loves the classics and the story of life.