Tess of the d’Urbervilles by Thomas Hardy is one of the saddest books I have read. Yet, it is an interesting and a gripping tale of a young poor girl coming of age, coming face to face with the harsh realities and evil of the world, all for the happiness of a few days, which she knows will never last. 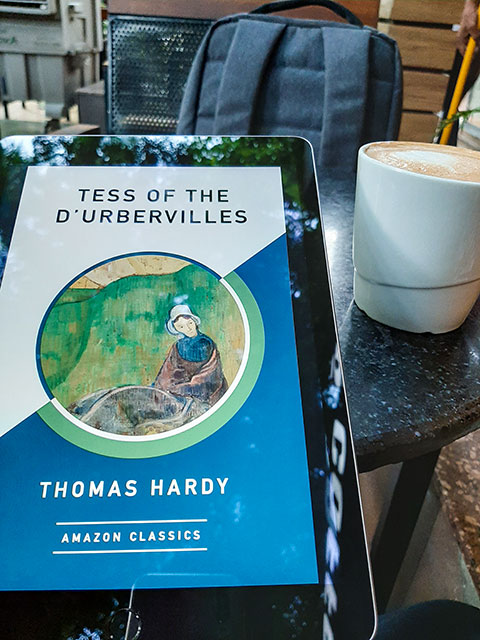 Tess Durbeyfield is a young girl of 16, with limited means. Her family a face of apathy, to which she is resigned. Until one day, her father discovers he is not really a Durbeyfield, rather a descendent of d’Urbervilles, a ancient family of renown and noble birth. Today all that remains of the d’Urbervilles is him and a rich old lady, living in a town not far from his village.

After the accidental death of their horse, due to Tess, the family is left penniless and her mother and father decide to send her away to that rich lady, hoping she would help her and in turn, them.

To cut the long story short, the rich lady isn’t really a d’Urbervilles, just a widow of a rich merchant who adopted the d’Urbervilles name in order to appear better than he was. Her son is a scoundrel and seducer, who eventually takes advantage of young Tess, when she comes to live with them, in order to raise the chicken on their farm.

Tess leaves the farm, comes back home and after the young girl’s young and frail child dies, she makes a desperate attempt to baptises the child at night, by herself, in order to ensure he does not ends up in the worst’s of hells. After this, Tess leaves the farm and goes to another village in order to work as a milkmaid, though mostly to get away from all the rumors and gossips.

There she falls in love with Angel Claire, son of Reverend James Clare, who is at the Talbothays Dairy Farm to learn farming, since his liberal views had forced the Reverend to desist him from going to the university, in order to limit his ability to oppose God!

After a long courtship, during which Tess repeatedly tries to push away Angle, without being able to tell him her sob story, she finally agrees to marry him. After marriage, he tells her of his indiscretion with a woman fallen character, who had tried to seduce him. Tess forgives him and then in hope of being forgiven as well, she tells him about her tragedy as well.

However, Angle with all his modern views, cannot do that and eventually goes away to Brazil, leaving her with her parents and with little money.

Eventually, both the lovers suffer at the hand of fate, though Tess suffers far more severely.

Until the end, when the reunite and spend a few happy days together, only to part forever.

The worst part about the story is, despite everything, the lovers are united for only a short duration. Though that might just be the best part about it, after all, love fades away or at least, changes. Thoughts creep in and distance become so vast, that love is no longer enough.

In any case, Tess of the d’Urbervilles is a wonderful classic and a must read by all accounts.