I am a firm believer that you find the right books at the right time. This is one of the reasons, I almost never research on what to read next, rather try and it finds a random one from the bookshelf or kindle library.

On a rainy evening, I found The Sorrows of Young Werther by Johann Wolfgang von Goethe. Even though it is a translation of a German book to English, it turned out to be so gripping; I managed to finish it in a jiffy. Finding only on a handful of occasions to it to be lacking in flow. 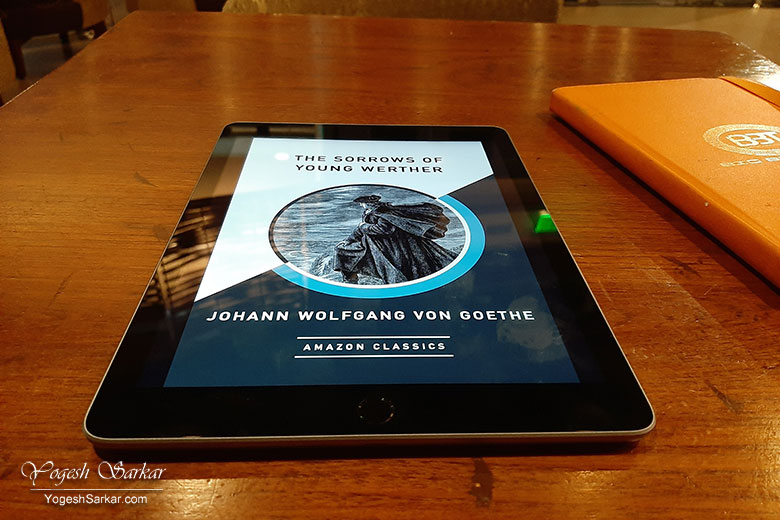 The story mainly consists of the letters written by Werther, a young sensitive and passionate artist, to his friends Wilhelm.

The letters depict Wether’s exploration of the small village he has decided to live in for a short duration and the simplicity of the working class he encounters and comes to respect and admire. Slowly though, the tone of the letters change, as he meets a beautiful girl, Charlotte and is immediately charmed by her beauty, nature, and conduct.

Sadly, though, she is betrothed to another and as Charlotte and Werther come close, this fact pains Werther immensely, knowing he will likely never have her and yet cannot help loving her.

As she gets married and Werther tries to forget her by moving to another town, finding employment there, he discovers, no matter the distance, his heart still yearns for her and eventually, he returns to her town.

Melancholy grips Werther like a fever that never goes away and eventually decides to end his life, before that though, he pours out his heart in front of Charlotte, who too loves him as a friend and much more. Yet, there is nothing to be done now that she is married. So she locks herself in her room, while Werther goes back to his rented accommodation.

Then with a peace, which prevails only on those, who know there is no hope or alternative left, he calls his servant, hands him a letter for Charlottes’ husband, while he settles all debts and accounts, writes to his friend and mother, asking for their forgiveness for the act he is about to commit.

Werther’s servant hands his note to Charlottes’ husband, in which Werther requests him to lend him his pistol since he is once again going to forest like earlier. The husband, already annoyed by Werther and the closeness between his wife, tells Charlotte about the letter and asks her to fetch the pistol.

Charlotte understands fully why Werther has asked for the pistol, with trembling hands she takes down the pistol and wipes the dust off of it before it is handed to the servant.

Werther after knowing Charlotte had given the pistol after wiping off the dust, becomes all the happier, begins writing his last letter till late in the night, when he finally pulls the trigger. Though he does not die, after all, how can death come so easily to a person who has been denied the only thing he seems to want in the whole world?

Therefore, he lays on the floor of his room till morning, until he is discovered by his servant, with a bullet having gone through face to his skull, in a pool of blood, almost motionless, yet alive. After few more hours of suffering, the young Werther dies. His funeral procession almost entirely consists of the laborers who have come to respect him, while the upper class and the priests stay away because he has committed the sin of suicide.

Bringing to an end, one of the most tragic books I have read and loved.

Even though Young Werther might have been unfortunate in his love life, I feel he was lucky enough to have a friend with whom he could share his most intimate thoughts. Even the ones we rarely if ever are able to share with even the friends and family closest to us.

The Sorrows of Young Werther might not be most eloquently written, however it is full of emotions often suppressed in other stories. For that alone, it gets my recommendation.